A look at some of the biggest Financial Scams in India 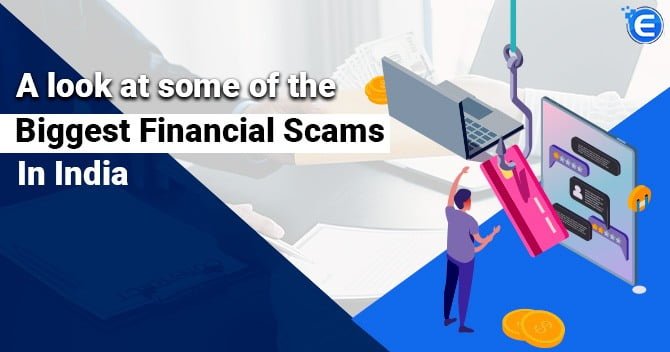 Financial scams have hit the economy of nations across the globe. These scams have cost billions of dollars. Corruption and malpractices can taint the image of any country. Here in this article, we take a look at some of the biggest financial scams in India.

What is a financial scam?

Financial scam takes place when a person takes away money or other assets from others through deception or criminal activity.

Liquor baron Vijay Mallya in 2016, absconded the country and went to UK after he was accused of money laundering and fraud. He allegedly owes more than Rs. 9000 crore to various banks, which he took as a loan to prevent his now defunct Kingfisher airlines from falling apart. Recently he was declared a fugitive economic offender under the Fugitive Economic Offenders Act[1]. Now the Indian government is trying to extradite him from UK. Earlier, Mallya had asked Finance Minister in a series of tweets to consider his proposal of repaying 100% of the amount to the banks that he had borrowed.

One of the biggest financial scams in India took place through Punjab National Bank’s Brady house brand, where Nirav Modi, his uncle Mehul Choksi and 2 senior PNB officials were involved in the fraud. In 2018, PNB had filed a case with CBI accusing Nirav Modi and his associated companies of obtaining Letter of Undertaking from the PNB without paying the margin amount against loans. It meant that if the companies failed to pay loans, then the bank (PNB) will be required to pay the amount.

The coal allocation scam surfaced in 2012, which was brought into notice by the Comptroller and Auditor General when the government was accused of illegally allocating 194 coal blocks between the year 2004 and 2009. In this scam, various bureaucrats and politicians were also involved. Although the initial estimated loss was more than 10 lakh crore rupees, but the final report specified that the amount was 1.86 lakh crore rupees.

In 2008, the government was alleged to have undercharged mobile telephone companies for frequency allocation licenses that were used to create 2G spectrum subscriptions. A. Raja, the former telecom minister was at the centre of this controversy that arose. The Comptroller Auditor General said that the difference between the money collected and the amount of money mandated to be collected was 1,76,000 crore rupees. In 2012, the Supreme Court of India declared the spectrum as unconstitutional and arbitrary and let to the cancellation of more than 120 licenses.

This corporate scam is also called as India’s Enron Scandal and involves B Ramalinga Raju and his Satyam Computer Services Limited. The company had admitted that it misrepresented, manipulated and falsified accounts of more than 14000 crore rupees in front of its board, investors, stock exchanges and other stakeholders.

This took place in 2006 in Defence Sector by defence personnel worth 18000 crore rupees. In this, arms dealers senior defence officials working in Navy War room in PMs Secretariat in India obtained sensitive data related to military purchases and defence acquisitions for getting multi-billion dollar contracts worth 6 billion US dollars. A Higher authority personnel fled to UK in 2006, and Interpol notice was issued against him, but even after long years of legal battle in UK, India failed in getting him extradited.

The commonwealth games was held in India in 2010, but the highlight was not games but corruption at its peak. The entire event was accused with criminal conspiracy, cheating and forgery. The chairman of the Commonwealth Games 2010, Suresh Kalmadi, was accused of corruption. Reportedly the Indian athletes were forced to stay in terrible condition, and the accommodation allotted to them officially was not provided to them actually.

This scam came forward in 1990s where major politicians were involved in bribery. The scam involved hawala brothers, Jain brothers, who were linked to a raid on terrorists. It came to light that payments of alleged black money was made by these politicians through the brothers.

Prevention of Money Laundering and financial Scams in India

In the year 1996, the government had appointed a committee to look into the matter of money laundering and to recommend appropriate legislation, if required. A new bill with the proposal of parliamentary standing committee was introduced in 1999. The Act was enacted in 2002.

Special courts have been set up to decide cases of money laundering in India. However, the cases needs to be fast tracked, and the proceeds should be confiscated without any delay.

The government should take effective actions, and financial institutions should be geared up to tackle the menace of financial scams in India. It may not be easy to get control over money laundering activities without the help from legislative and executive bodies. Therefore there is a need for support from all in authority.

The Reserve Bank of India issued a principle-based resolution framework for addressing defaults...

Impact of Money Laundering on Socie...

What is FATF (Financial Action Task...

The Financial Action Task Force was formed in 1989 to develop policies against money laundering...