Reassessment should be conducted by officer who conducted assessment: Guj. HC 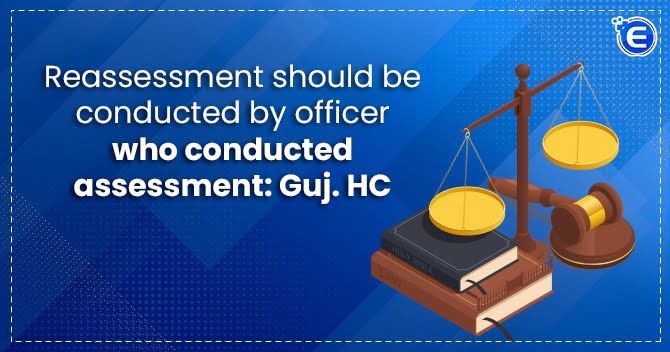 In the case of M/s. Aztec Fluids and Machinery Pvt. Limited, the honourable Gujarat High Court held that the reassessment proceedings must be conducted by the same officer or his successor who carried out the assessment proceedings. The Gujarat High Court then went on to quash the reassessment initiated by the Directorate of Revenue Intelligence. In this write up we will go through the complete case.

Facts of the Case relating to Reassessment

The petitioner, M/s. Aztec Fluids and Machinery Pvt. Limited, being a private limited company is an entity engaged in the business of trading and manufacturing of goods such as inkjet printers, laser printers and its parts and accessories of such printers.

The officers of the directorate of revenue intelligence formed a belief that the petitioner misclassified the CIJ printers, and parts of CIJ printers and laser marking machines in order to avail of the lower rate of duty or full exemption and those terms, the investigation was carried out.  After the inquiry and investigation carried out by the additional director general, the directorate of revenue intelligence issued the show cause notice invoking the provisions of Section 28(4) of the Customs Act. The additional director general proposed to reassess the transactions of imports made by the petitioner at different customs stations.

What is Directorate of Revenue Intelligence?

The Directorate of Revenue Intelligence (DRI) is the leading anti-smuggling agency of India, which works under the Central Board of Indirect Taxes & Customs (CBIC), Ministry of Finance, GOI.

It is involved in detecting and curbing smuggling of contraband, including drug trafficking and illicit international trade in wildlife & environmentally sensitive items, & combats commercial frauds pertaining to international trade and evasion of Customs duty.

This not only terms misdeclaration of goods as inkjet printer in bills of entry to misclassify them and evade custom duty but that the petitioners have misstated wilfully the facts to the department by classifying wrongly, the subject goods under CTH 84433250 instead of the actual classification under CTH 84433910.

The High Court, while deciding on the matter, placed reliance on the decision of the Supreme Court in the case of M/s. Canon India Pvt. Ltd. observed that while analysing Section 28A(4) of the Customs Act, the provisions should be construed as conferring the power of such review on the same officer or his successor who has been assigned the assessment function. An officer who performed the assessment could only undertake reassessment. Therefore the court after extensive analysis, held that the entire proceedings initiated by the Additional Director General of Directorate of Revenue Intelligence by issuing show cause notices in all the matters are invalid. The court further held that the such issuance of the notices were without any authority of law hence it is liable to be set aside. Accordingly, the court also set aside the ensuing demands.

While allowing the petition filed from the petitioner, the division bench presided by Ms. Justice Sonia Gokani and Mr. Justice Rajendra M Sareen held that show cause notice issued in each of the case by the Directorate of Revenue Intelligence is quashed based on the rationale laid down in the case of M/s. Canon India Pvt. Ltd. hence the court ruled that reassessment must be conducted by the same officer or his successor who carried out the assessment proceedings. The court as an an interim measure, stated that further proceedings pursuant to the impugned show cause notice will remain stayed. However the court further stated that any proper officer duly authorized can initiate appropriate proceedings, if deemed fit and permissible under law.

Manage Your Inventory Wisely to Red...

For every business, working capital is required for operating the business of the Company. Rota...

Remission of Duties or Taxes on Exp...

The Remission of Duties or Taxes on Export Products (RoDTEP) Scheme has been formed by the Indi...