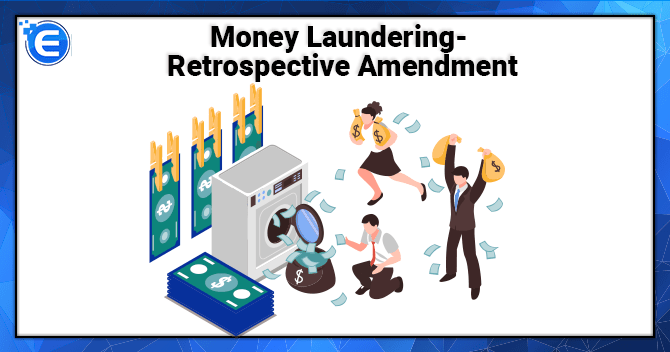 Before the amendment, section 3 is all about- whoever directly or indirectly, attempts to

a) indulge or knowingly assist or knowingly is a party or is involved in any process or activity b) connected with the proceeds of the crime including its concealment, possession, acquisition, or use and projecting or claiming it as untainted property shall be guilty of the offence of money laundering.

After the Amendment, section 3 is read as follows- the explanation was added in words, for the clarification of doubts, it was held that a person should be held guilty of money laundering if such person is found directly or indirectly attempted to indulge or knowingly is a party or is involved in one or more of the following process or activities connected with the proceeds of the crime are – concealment, or possession or, acquisition or use, projecting as untainted property, or claiming untainted property, in any manner whatsoever connected with proceeds of the crime, is a continuing activity and continues till such time a person is directly or indirectly enjoying the proceeds of crime, by its concealment or possession or acquisition or use or projecting it as untainted property.

The object of Amendment under Money Laundering Section 3

After the joint reading of both the sections, it can be held that from the section before amending that any person who has derived property from criminal activity relating to the scheduled offences, which include concealment, possession or acquisition or use, and projecting or claiming it as untainted property shall be guilty of the offence of money laundering.

In both the categories, the person shall be liable under the Prevention of Money Laundering Act, 2019.

The case gave the judgment over the point view of the retrospective amendment of Money Laundering Act- under section 3.

The court held that a person cannot be tried for the offence under the Act when the said has not been listed in the schedule of offences in the Act. The court mentions that the article 20(1) of the Constitution would be infringed. It is a fundamental right. The court clearly mentions that the petitioner has committed the offences that were not mentioned in the offences’ schedule. The offences were committed by the petitioner were before the insertion of the provisions in the schedule of Prevention of Money Laundering Act (Amendment) 2009[1]. The directorate could not invoke the PMLA provisions retrospectively.

Where the court has mentioned that, the PMLA cannot be read as to empower the authorities established under the Act to initiate the money laundering proceedings before the Act came that is 2005, or before the related crime is included under the list of schedule of offences in the Act.

The Act is considered in the nature of the penal offence and no retrospective amendment is possible.

The Amendment which has been incorporated under section 3 – that defining money laundering offences has come from Finance Act, 2019. The definition which has been amended is the proceeds of the crime, which implies the retrospective amendment of the PMLA. Criminal activity is not defined yet- which means whether the untainted property has been acquired, concealment, possession, projecting or claiming of the property obtained from schedule offences. The term is not so exact yet.

It can be concluded that the retrospective amendment of the Money Laundering Act has been not clearly defined. The Amendment of Section 3 has made the offence as of continuing nature. The possibility is less, considering the stages of the operation of Act, which is Section 4 and Article 20 (1) of the Constitution of India. Considering the three stages of the Amendment, where the first stage is the placement of the offence, where the criminal places the proceeds into the financial system and second is the layering, where money is introduced in the financial system and spread across the various transactions, so that the link of the original transaction or wealth is lost. Third is the benefit of the proceeds which the criminal takes away in the form of untainted money.

By adding explanation under section 3 which makes the offences a continuing offence. This implies that the offence is constituted till the time person is enjoying the benefits from the tainted property.

If this is accepted, then the offence of money laundering is never made under section 4 of the Act. Prior to this Amendment, the various High Courts have rejected the view of retrospective application of Money Laundering Act. The appeal in Supreme Court is pending.

Read our article:Money Laundering and Terrorist Financing for NBFCs

The Reserve Bank of India issued a notification for an amendment to Master Direction on KYC (Kn...