Impact of Money Laundering on Society at large 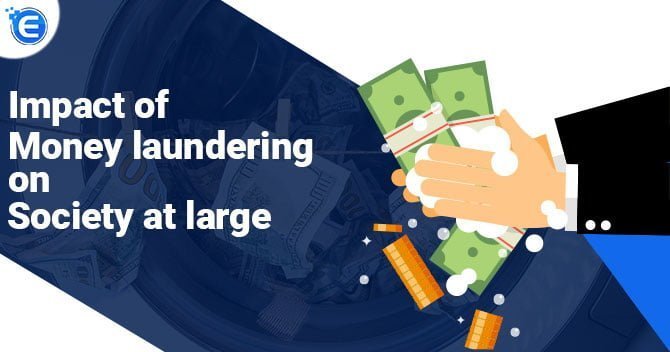 Analyzing the Impact of Money Laundering

Through the dirty tactic of Money laundering, criminals earn massive amounts of money, which can actually impact the society at large. It can affect society adversely in numerous ways.

For instance– Suppose the money earned through money laundering is invested in real estate sector, in buying properties or vehicles, or such other things, then such activity can originate an artificial demand in the market, thereby inflating the value of the product. In external sector, it can impact fair competitiveness in the market.

Money laundering has also impacted businesses and the economies of nations. As per the data surveyed by the UN Office on Drugs and Crime, the magnitude of illegally laundered funds made by drug trafficking and organized crimes stand at 3.6% of the global GDP. This signifies the fact that the criminals have damaged the financial institutions, society and the economy.

Impact of Money Laundering on Society

We need to know that the political and social price of this tainted tactic will be severe and rampaging if left unchecked. It can be compared to a bug which will decimate the social structure of the nation. The criminals get involved in drug peddling business and imagine the young people getting trapped into it for quick money. It can completely destroy their career as well as their life. So money laundering and money launderers can have its worst ramifications on the young generation of the society.

Such acts eat away a major portion of funds belonging to the government in order to demarcate them. The criminal act raises the demand for the enforcement agencies to fight against the violent crimes, and in that process, the government has to use the money for fighting the financial crimes instead of using it for the development of people and nation. In a nutshell, the tax revenues paid by the citizens of the country which should be used for employment generation, extending health and educational facilities, goes in tackling such criminal activities, thereby causing massive loss.

Apart from this, the healthcare cost also rises significantly where the drug angle is involved. In the commission of such crimes, people’s lives are lost and leaves the society in a state of distress and shock. Young people are mostly affected by this.

Money laundering is leading to rise in corrupt practices among government officials as the governmental institutions turn blind eye to criminals on payment of certain amount. The influential reach of the criminals in the financial machinery of the government to turn their illegally earned money into legal, has led to corruption. When money launderers are not caught, then it motivates other section of society to do the same as it helps them to make massive amount of money, lead lavish lifestyle, and make connections with high profile individuals. The political links of criminals degrades the social fabric and adversely impacts the moral and ethical standards, and affects democratic system of governance.

What can India do to tackle Money Laundering?

Laws are put in place to tackle the menace of money laundering but is that enough? Here are a few suggestions:

The banking and financial staff are not technically sound to identify vulnerable transactions. Therefore there is a need for financial institutions to provide technical training to its staff members in order to keep a check on suspicious transactions and report it.

The government must require from financial institutions to report every suspicious transactions to the RBI[1], and if there is any non-compliance, then strict action should be taken against such financial institution. Moreover, KYC guidelines must be executed sincerely, which involves taking information of the businesses that customers are involved in. It will help in elimination of money laundering transactions/accounts.

Further, the enforcement agencies must be trained enough to tackle those that are involved in severe crimes such as drug and human trafficking. Taking such steps as early as possible can prevent potential losses and eliminate any adverse affects on the society at large.

The impact of money laundering to the society and economy can be dreadful. We have witnessed its aftermath in various nations. Hence the government and the people of this nation must unitedly work to erase this menace from its root. This won’t happen overnight and will take concentrated efforts from every section of the society.

Read our article:A look at some of the biggest Financial Scams in India

How do tax incentives impact househ...

The difference between income and expenditure is referred to as savings. Because investment is...

What are the Tax-Saving Investment...

Considering the fact that the costs of living has went up and due to the high inflation rates i...

Money laundering is the unlawful process of presenting "dirty" money as legitimate rather than...