What Are The Different Types Of Audit Opinions? 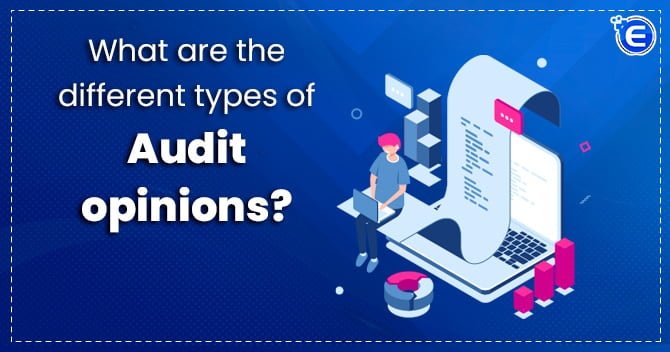 Often people come across audit reports and the opinions given in them as complex and hard to understand. One of the reasons for its complexity is that auditors need to make various assumptions in finalizing reports which are subjective in nature. The auditors make different types of audit opinions regarding the company’s financial status to investors which in turn provides a picture of the company’s financial performance in a given fiscal year. Based on the different types of audit opinions given by the auditors, the investors and financial institutions take their decisions with respect to investment in the company.

This article provides the meaning of the audit opinion and the characteristics of different types of audit opinions given by the auditors after conducting an audit.

What Is An Audit Opinion?

What Are The Different Types Of Audit Opinions?

One of the most common reasons for the auditor’s to provide an unqualified opinion is that the company failed to present its financial statements in accordance with the Generally Accepted Accounting Principles (GAAP)[1].

All the above reasons prevent the auditors from expressing a definite opinion which forces them to come out with a disclaimer of opinion report. The image of these types of audit opinions is not considered attractive for the investors instead it portrays a negative image in the minds of the investors regarding the functioning of the company.

This type of audit opinion gives rise to a situation where both the regulatory authorities and the investor start to mistrust the financial reports of the company.

There is greater probability that the financial institutions and investors of the company may not want to engage with doing any business with the company in the future.

These types of audit opinions are used by the auditors to alert the financial institutions and the public about the transparency, reliability and accountability of the companies. These statements are also used as a pressure tactic in order to pressurise the companies to align their financial reporting practices with the best practices and pay close attention to accuracy. Since these adverse opinion reports alerts the public and other stakeholder, they are highly valued by them.

Having gone through the characteristics of the different types of audit opinions, the company needs to ensure that there is efficient management of the audit processes and synthesise it with the modernised approach. This allows a company to stay ahead with the emerging risks.

Read Our Article: Scope of Reporting of Auditors in Audit Report as per MCA

What are the Tax-Saving Investment...

Considering the fact that the costs of living has went up and due to the high inflation rates i...

What are benefits of a Good CIBIL S...

If you are looking around for loans and credits, you may have heard about the CIBIL Score. Ever...

Money laundering is the unlawful process of presenting "dirty" money as legitimate rather than...