No Prosecution Against Directors for Operational Issues: Concept of Vicarious Liability 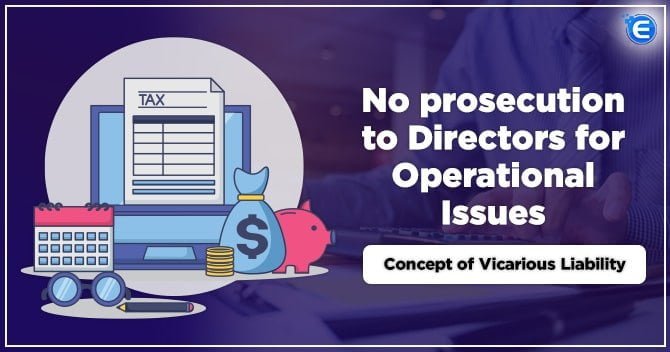 The concept of corporate structure is based on the very premise of the business idea brought into by a group of persons, backed up with funds from shareholders and creditors set to implementation by directors who are elected by the shareholders. The shareholders continue to hold certain decision-making powers, while the directors are broadly responsible for the functioning and performance of the company. It is needed to be understood that a director of a company is not always in charge of everyday affairs. It always depends upon the respective role assigned to different officers in a company.

The directors are considered as the brain and neural control center of the companies, but it is evident that the day to day affairs of companies are not run by the board of directors or not even the executive directors of companies. Therefore the question arises whether directors can be prosecuted, merely because they hold board positions, for something as operational? The answer is given in the SC recent ruling of Shiv Kumar Jatia vs. State of NCT of Delhi has taken forward its earlier rulings in the case of Maksud Saiyed vs. State of Gujarat & Ors and Sunil Bharti Mittal vs. CBI, has held unless specifically provided for, the doctrine of vicarious liability is not applied to offences provided under the provisions of IPC.

Under the concept of doctrine of vicarious liability, one person is held responsible on behalf of the wrong doing of the other. Such type of liability arises only when both persons are somehow connected to each other like employee-employer relationship or principal-agent relationship. In case of corporate, the applicability of the said doctrine is to be determined on the basis of provisions of statute dealt with.

Recently, the Supreme Court in Iridium India Telecom Ltd. v Motorola Inc. has considered the issue whether a company being criminally responsible for the actions of its employees. In case Motorola sold a technology product to Iridium that was accompanied by assertions and promises by Motorola that allegedly turned out to be false. Iridium has filed a case of cheating against Motorola. The case was not against Motorola’s employees but against Motorola Company itself. Cheating requires an intention to deceive, under the provisions of the Indian Penal Code. Motorola presented an argument that being a corporate body and an artificial person, the company is not capable to have mental state and hence cannot be held criminally liable for offences such as cheating. The Supreme Court has rejected the Motorola’s arguments after considering the modern approach to the problem of corporate criminal liability.

Of particular relevance the Supreme Court’s referred to the House of Lords decision given in Tesco Supermarkets Ltd. v Nattrass where it was held that, in the absence of a specific statutory or common law exception, the principle of corporate criminal liability was not based on the vicarious liability. Instead, it was based on the concept of attribution. However, it’s true that a company cannot think and act on its own as it is a juristic personality. The acts are done through certain of its employees. And therefore, the mental states and actions of its employees are attributed to the company.

This is a legal fiction which was required in order to the separate legal personality of the company to sustain itself over a period of time. Otherwise, the company would not be able to sign contracts, negotiate with business partners, acquire property, sue and be sued and make public disclosures. Hence, it is followed from Tesco Supermarkets case that corporate criminal liability is not a species of vicarious liability but is a species of attribution of natural actions and states of minds to artificial entities.

Liability of the officers for offences under Companies Act

The Companies Act, 2013 has explicitly identified officers who are in default for the purpose of the Act, which includes directors. In furtherance to Section 149(12)(ii) of the Companies Act 2013 provides that liability arises only with respect to such acts of omission or commission by a company which had occurred with the knowledge and attribute through which the Board processes, or with the consent or connivance or where it does not act diligently. The obligation relies upon the ROC to verify relevant information and records before initiating prosecution against independent or nominee directors. However, it is to be noted that it is to be considered only when there has been any contravention with the provisions given under the Companies Act while in case of other statutes; respective provisions are to be monitored.

Liability for the criminal felonies

When a Corporate body gets prosecuted for a criminal offence, the individual to be held liable for the same, but it remains a matter of consideration. The extent of the liability of Non-Executive Directors is a matter of fact. The Supreme Court’s judgment in the case of Shiv Kumar Jatia vs. State of NCT of Delhi has quashed the impugned order of the High Court and held the release of the Managing Director from the criminal liability imposed on the concept of the doctrine of ‘vicarious liability’.

Shiv Kumar Jatia was the Managing Director of M/s. Asian Hotels who looks after Hyatt Regency Hotel. He was authorized by Mr. PR. Subramanian has to apply for lodging license of the respective hotel.

There was a contravention in the condition of the lodging license which has led to a hotel guest enter into a semi under-construction terrace for smoking purpose. The guest has fallen from the terrace of the 6th floor and got badly injured. The matter was presented before the High Court, which ordered for prosecution the Managing director along with the other three accused by relying on the case of Sushil Ansal vs. State through CBI.

Shiv Kumar Jatia appealed before the Supreme Court against such impugned order of the High Court where the case was decided in his favour vide judgment dated 23rd Aug 2019.

Alleged offences were of Section 336 and 338 of the IPC

Section 336: It states that who so ever does any act rashly or negligently which endanger human life or the personal safety of others, must be punished with impris­onment for a term which may extend to 3 months, or with fine which may maximum extend to two hundred or with both.

Section 338: It states that who so ever causes grievous hurt to any person by doing any act rashly or negligently which endanger human life, or the personal safety of others, must be punished with imprisonment for a term which may extend to 2 years, or with fine which may maximum extend up to one thousand rupees or with both.

Apex court has stated that the essential elements required to prove an alleged offence for the provisions of section 336 that are:

The Court referred to the judgment of Maksud Saiyed vs. State of Gujarat & Ors; the Court held that the IPC does not contain any such provisions for vicarious liability on the part of the Managing Director or Director of the company when the accused can be a company. It is supported by the case of Sunil Bharti Mittal vs. CBI wherein it was held that:

“a corporate entity is purely an artificial person who acts through its officers, managing director, directors, chairman etc. If a company commits any offence involving mens rea, then it would normally be the intent that an action is performed by an individual who would act on behalf of such company. Meanwhile, at the same time, it is also a cardinal principle of criminal jurisprudence that there will be no vicarious liability unless the statute specifically provides so.”

That means where the statutory provision itself does not specifically provides the doctrine of vicarious liability, for that an individual cannot be implicated for the same.

It was declared that in the absence of any statutory provision incorporating vicarious liability, an individual cannot be made accused. There must be a sufficient evidence for his ‘active role coupled with criminal intent’. Such criminal intent must required a direct nexus with the accused.

In the above case, the Managing Director was not present on the day of the accident. Therefore, mere authorizing an official for obtaining license cannot be construed as his active role with criminal intent. That is why, the same was also failed to be established before the Hon’ble Court.

The Apex Court finally held that there is no specific provision for the applicability of doctrine of vicarious liability under the IPC. In further to that, the allegations made on the Managing Director could not establish any active role coupled with criminal intent having direct nexus with a accused.

Concluding the same, the Court has passed the judgment that the allegations made on the Managing Director was vague in nature and the criminal proceedings against Shiv Kumar Jatia as passed by the High Court were quashed.

The Court also has a view that merely because of holding the position as a director/managing director, a person cannot be vicariously held liable for offence committed by Companies. It is proved that he was not responsible for, or in control of, or negligent in conducting the affairs of the company. In the absence of definite averments, a director cannot be deemed to be liable.

Indian statutes have a long history of imposing special vicarious liability for a number of offences relating to tax evasion, money laundering, securities-related offices and corporate fraud. Corporate officers are statutorily liable for their company’s offences if they are in charge of and responsible to the company for the conduct of the business of the company. This can b a case of strict vicarious liability because no particular wrong doing is required of the corporate officers. Their liability is based on the powers and responsibilities assigned to their positions in the company.

Indian courts have interpreted the special vicarious liability provisions quite strictly and have pointed out that even if the corporate officer is formally responsible to the company for the conduct of the business of the company, the prosecution has to prove that in fact, the corporate officer was in charge of the overall (not merely one part of the business) day to day business of the company. This is likely to be a high threshold and would, in all probability, cover only the top management of the company such as the managing director and the whole-time directors. Under this legislation, for a variety of offences identified under the legislation, certain corporate officers identified by the legislation as officers in default are vicariously liable without any requirement to prove that these officers were actually in charge of the affairs of the company.

Also, Read: Removal of Directors as per Companies act 2013.

A website can be understood as a collection of publicly available information which is present...

Nowadays, aluminum due to its intrinsic, strength to weight ratio, electrical, versatile proper...

How to Setup Beauty Saloon Business...