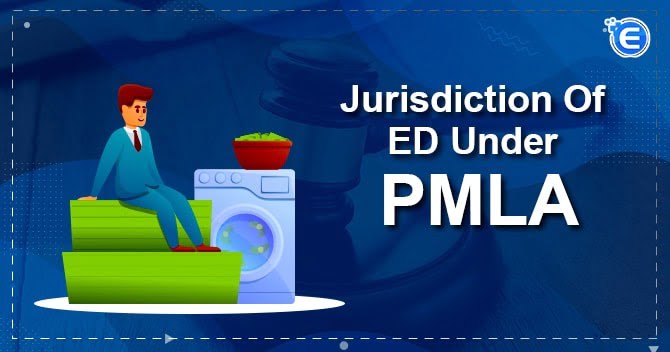 Recently, a matter where the Directorate of Enforcement (ED) recovered unaccounted money to the tune of Rupees 190 crore was referred to the Supreme Court wherein  the apex put forward a question whether the jurisdiction of ED exists under Prevention of Money Laundering Act, 2002 (PMLA) in the absence of a predicate offence.

Query posed by the court related to Jurisdiction of ED

According to the scheme of PMLA, ED registers an Enforcement Case Information Report (ECIR) in order to probe the cases of money laundering related to the proceeds of crime which have been committed prior and First Information Report (FIR) for such an offence already exists.

A three judge bench of the Apex court is hearing a batch of petitions regarding interpretation of various provisions of the PMLA while hearing the above matter of raid conducted by the ED for the recovery of Rupees 190 crore asked for resolution of the query whether jurisdiction of ED exists to probe such matters.

The Apex court said that the ED did some searches and conducted some raids to trace cash of Rupees 190 crores where no predicate offence existed under the PMLA against the person nabbed by the ED.

The Supreme Court (SC) questioned asked for the procedure to deal with such kind of unaccounted money. The SC also rapped the other authorities such as the local police and the concerned Income Tax authorities who failed to do their job in not recovering the unaccounted money. It is the ED which recovered that money. The court then asked the counsel representing the petitioners whether the jurisdiction of ED exists over such a matter and what should be done to the recovered money. The court further asked which of the authorities would be responsible and which one of them will be having jurisdiction in such a case.

Arguments of the Petitioner over Jurisdiction of ED

Responding to the questions posed by the Apex Court[1] the counsel for the petitioners replied that the fact that a particular authority fails to do its job which the law has entrusted upon them does not give way to other authorities to acquire such jurisdiction which the law has not entrusted on them.

The lawyer drew the attention of the court on the existence of a coordination committee which shares the actionable intelligence with various government probing bodies such as Serious Frauds Investigation Office (SFIO), Income Tax Department, ED etc.

The counsel said that according to law, a jurisdiction cannot be conferred which does not exist in the first place and since the ED has not been conferred the jurisdiction under the scheme of PMLA.

The counsel argued that the if the ED gets the power to suo motu initiate the enquiry against anyone contrary to the powers conferred on ED under the scheme of the PMLA, then it can have serious connotations under criminal law where there would be no end to the powers of the ED.

To the submissions put forward by the counsel for the petitioners, the bench asked the counsel that if the ED gets intelligence about some unaccounted cash lying at someone’s house then should the concerned officer rush to the office of the concerned police station.

The counsel then responded that just because one of the appropriate agencies was unable to fulfil the task conferred on it by law that does not translate into other agency taking on the jurisdiction which has not been conferred on it by the law.

The counsel also raised the issue of retrospective application of the provisions of the PMLA where the ED has been attaching properties for the predicate offences which were committed by the accused people way before PMLA came into being.

The counsel then went on to explain the scope of PMLA and why it came into being. PMLA came into being to deal with the proceeds of crime which were generated through organised syndicate committing organised crimes of prostitution, narcotics and through various processes integrated in the legitimate economy of India.  This law of PMLA was brought to cut down the sources of their financing since this is the only effective way to stop the whole network.

Questioning the ineffectiveness of the PMLA where the list of scheduled offences has been increased to a new level, the counsel argued, the purpose of such legislation has lost. The counsel also talked about how the law of PMLA is being misused to attach the properties of the accused at the initial stage before the predicate offence reaches a significant level of investigation.

Decision of the court

The SC decided to postpone the matter to a later date through virtual mode.

Earlier, the matter of ‘mechanical lodging’ of ECIR under PMLA has been raised before the apex court since the offence of money laundering can only be initiated against a person when there is an indication of any act of money laundering and the accused has on top of that projected that money as a legitimate money earned from legal sources. The jurisdiction of ED exists where the predicate offence exists.

On the other hand, Solicitor General has also apprised the court that there are over 200 petitions in the matter and in most of such cases, interim stays of have been granted which has been hampering the process of investigation especially in some of the most serious cases. Some of the petitions have also challenged the validity of the case itself.

Read our Article:Section 45 of PMLA applies to those arrested by ED

Money laundering is generally viewed as the conversion of property derived from a criminal offe...