Section 45 of PMLA applies to those arrested by ED 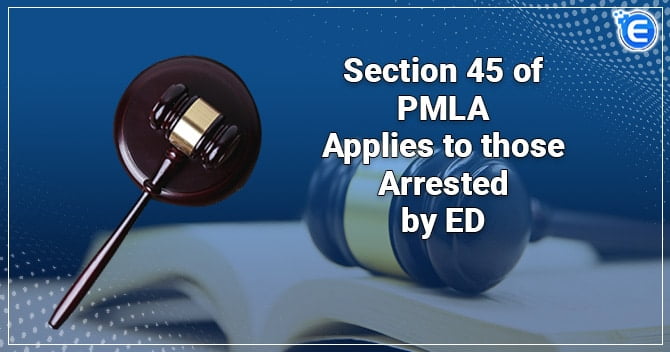 A recent order of the Delhi Court, while deciding the question related to regular bail applications filed by the accused persons under section 439 of Code of Criminal Procedure, 1973 (CrPC), has decided that section 45 of PMLA is applicable only to those persons who have been arrested by the Directorate of Enforcement (ED) under the offences mentioned in PMLA.

The order was passed by a Court of Special Judge, Tis Hazari Court. Applications were filed by the accused before the learned judge by the ED alleging commission of offences under section 3 read with section 70 of PMLA. It must be noted here, that the accused were not arrested by the ED during their investigation under section 19 of the PMLA.

If the Director, Dy. Director or Assistant Director or any other person who has been mandated by the Central Government in this behalf, on the basis of any material in his possession, has reason to believe that any person is guilty of an offence punishable under this Act, then he can arrest that person and inform the arrested person of the grounds of such arrest.

Section 45(1)(ii) of PMLA states notwithstanding the provisions of Code of Criminal Procedure, 1973 (CrPC), no person who has been accused of any offence mentioned under the Act of PMLA shall be release on bail or on bond unless the Public Prosecutor has opposed the application, and the court is satisfied that reasonable grounds exist which shows the accused is not guilty of the offence under the act and also that the accused does not show any signs of committing the said offences again once he is out on bail.

Arguments made by the Accused: Inappicability of Section 45 of PMLA

The advocate appearing for the accused argued before the judge that the section 45(1)(ii) of PMLA cannot be applied in the given case since this section gets activated when adjudication is being done upon a bail plea of an accused who has been arrested by the ED under section 19 of PMLA.

The learned advocate for the accused further argued that the amendments introduced in the year of 2018 in section 45 of PMLA did not revise the twin condition which was struck down being unconstitutional by the Supreme Court in the case of Nikesh Tarachand v Union of India (2018).

The counsel drew the attention of the court towards the orders made by the honourable Supreme Court dated 16 December 2021 in the case of Satender Kumar Antil v CBI clarified the previous order made on 7 December 2021 only eased the process of getting bail and no way restricted it.

The counsel buttressed the argument by citing that the SC had made clarification that section 45 of PMLA has inadvertently been added in the category C of schedule of PMLA and SC has struck it down. In the same order, the SC clarified that mere filing of the charge sheet does not by itself become a cause to arrest the accused person. The counsel argued that this aspect was also accepted by the Supreme Court[1] in Siddharth v State of U. P. (2021).

Arguments made by the ED

The Special Public Prosecutor appearing on behalf of the ED argued that the twin conditions given under Section 45(1)(ii) must be complied while granting bail to the accused since the amendments made in the year 2018 have restored the twin conditions.

The counsel also pointed to the court that the economic offences has deep rooted conspiracy and involves loss of public funds. Therefore, they must be view seriously by the court before allowing bail to an accused of committing economic offences.

Decision by the court in Section 45 of PMLA

The learned judge of the Special Court at Tis Hazari Court while granting bail to the accused observed that:

The bare reading of the provision of section 45(1) of PMLA takes the attention towards the phrase “shall be released on bail”. This means for the ED to take any action against the accused under the section 45 of PMLA, the ED must have arrested the accused first. There cannot be any occasion to release an accused on bail who has not been arrested in the first place.

The court also observed that consistent view has been taken by various higher judicial fora that the economic offences stand on a different footing compared to other general offences. The court held that taking into consideration the special importance given to the economic offences vis-a-vis general Act/IPC, the similar view cannot be taken by this court when the agency has not arrested the accused as per the powers provided under section 19 of the PMLA. The court reminded the guidelines given by the apex court in the case of Satender Kumar Antil v CBI which consciously made offences under Special Acts a different category from other general/IPC offences.

The court further held that since the ED failed to exercise their power of arrest under section 19 of the PMLA, therefore the court is of the view that the provision of section 45 of PMLA and the related case laws cited by the party are irrelevant in deciding the given bail application.

The court cited Article 21 of the Constitution of India which says that no person can be deprived of his life and personal liberty except according to the procedure established by law. Further, since India is also a signatory to the International Covenant on Civil and Political Rights, 1966 which says presumption of innocence is a human right. Article 21 of the Constitution of India not only protects the life and liberty but also envisages a fair procedure of law. The legal framework must not interfere with the liberty of an individual unless there are cogent reasons exist for doing so.

Accordingly, the Special Court granted bail to the accused.

The Special Court after analysing the arguments from both the sides concluded that for initiation of proceedings under section 45 of PMLA, the accused must have been arrested by the ED under section 19 of the PMLA. In the instant case, since the ED failed to use their power of arrest the accused, bail application cannot be rejected under section 45 of PMLA. Infringing an accused’s right of fair trial following due procedure of law is inherent in the Indian criminal jurisprudence. The Special Court in the instant case has upheld the due procedure of law.

Read our Article:IBC can halt attachment of property under PMLA proceedings

Commonwealth Games are an international sports event held between the commonwealth nations ever...