IBC can halt attachment of property under PMLA proceedings 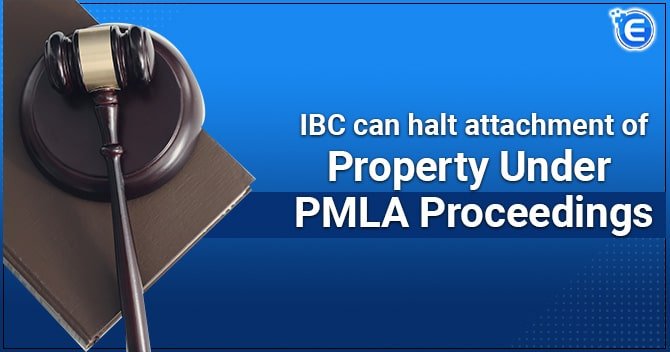 A recent judgment of the Delhi High Court has put to rest the conflict between the statutory provisions of Insolvency and Bankruptcy Code, 2016 (IBC) and Prevention of Money Laundering Act, 2002 (PMLA) seemingly encroaching upon each others’ jurisdiction with respect to the attachment of property of an entity undergoing insolvency proceedings on the charges of Money Laundering.

What is Enforcement Directorate (ED)?

Directorate of Enforcement or popularly called Enforcement Directorate is a special financial investigation agency entrusted with the responsibility to investigate, prosecute, impose penalties, compounding and dealing with offences and prohibited acts mentioned under the statutes of Prevention of Money Laundering Act, 2002 (PMLA) and Foreign Exchange Management Act, 1999 (FEMA). It comes within the ambit of Department of Revenue, Ministry of Finance, Government of India.

A company by the name of PSL Limited was undergoing liquidation under the scheme provided by the IBC. A liquidator was appointed by the National Company Law Tribunal (NCLT) as per the scheme of IBC to manage the estates and administer its affairs till the conclusion of insolvency proceedings of the said company.

Law Involved in attachment of property

This provision talks about the cessation of any action against the property of corporate debtor with respect to any offence which was committed by it before the initiation of corporate insolvency resolution process of the corporate debtor where such property has become a part of the resolution plan approved by the adjudicating authority under section 31 of Insolvency and Bankruptcy Code.

Arguments Advanced in the case of attachment of property

The counsel from the petitioner’s side argued that the ED proceedings for attachment of property ceases at the moment once the liquidation proceedings begin under IBC or at the moment when the adjudicating authority approves the resolution plan. The counsel further argued that any prosecution, attachment of property, seizure, confiscation or any action against the corporate debtor has been barred by the provisions of the IBC under section 32A.

The counsel from the respondents’ side i.e. from ED’s side countered that powers granted to the ED under PMLA cannot be seen as secondary to that of powers granted under IBC. The counsel further argued that the said provision of 32A of IBC is applicable only when the corporate debtor is undergoing resolution process and not at the stage of liquidation. They added that till the time the sale of assets are sold under the process of liquidation, the ED has the power of attachment of property of the corporate debtor under PMLA and the same power is no way curtailed by the provision of Section 32A of IBC.

The claims of the petitioner were upheld and respondents’ plea was dismissed by the court. The court began with explaining the scheme and objectives of both the statutes of PMLA and IBC where the authorities under IBC are concerned with the timely resolution of debts whereas the authorities under PMLA are concerned about the offence of money laundering and provisional attachment of property acquired through such criminal means.

Keeping different objectives of both the statutes in mind, the concerned authorities within their respective domains must be given sufficient space to execute the duties entrusted on them under their respective statutes. In case any conflict arises between the provisions of different statutes, the court must adopt the doctrine of harmonious construction interpreting the conflicting provisions in a manner that the conflict is resolved and both the conflicting provisions are applied without intuding into each other’s domains and fulfilling their objectives at the same time.

In the given case, the court noted that the provision under contention is 32A of IBC which forcefully ceases any complaints, prosecution of any kind against the confiscation or attachment of property if the insolvency proceedings have begun under section 31 of IBC. Taking into account section 32A, the court ruled that the ED’s extent of powers will be determined taking into account Section 32A of IBC.

The honourable court categorically stated that the power of provisional attachment or confiscation of property with the ED stands foreclosed once the adjudicating authority under IBC[1] approves the mode of liquidation.

The court then directed the petitioner i.e. the liquidator to continue with the liquidation process of the said company in confirmity with the provisions of IBC and at the same time restrained the ED from taking any action in respect of attachment of property of the corporate debtor.

The honourable court has clearly concluded that the objectives contained in both the statutes of PMLA and IBC, to be achieved by their respective competent authorities, are important in their own domains. No particular act can be given precedence over the other. However, the fact that IBC clearly states that no provisional attachment of the property can be done once the mode of liquidation gets the approval of the authority, then the powers given to the ED under PMLA need to interpreted in a manner so that conflict is not created and harmonious construction of the seemingly conflicting provisions is done by the court. This way the objectives intended by multiple legislations are achieved simultaneously without creating chances of conflicts in future.

Read our Article:Tracing the Developments in the Prevention of Money Laundering Act, 2002