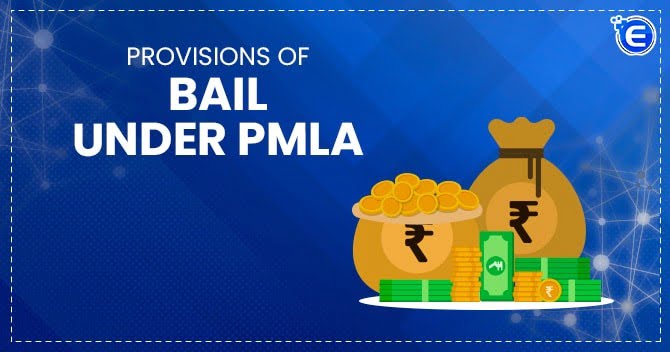 Bail signifies the judicial release of an accused charged with certain offences. The grant of bail is not to set the wrongdoer free but reinstate the fundamental principle of criminal jurisprudence that accused is presumed to be innocent until proven guilty. The grant of anticipatory bail is an extraordinary power given to the courts under Section 438 of the Code of Criminal Procedure, 1973.

What Is Money Laundering?

Money laundering is an illegitimate process of making money and depriving the government of its legitimate revenues; this illegal accumulated money is commonly known as ‘Black Money’. They are often considered the backbone of all the crimes and threaten the national security and sovereignty of the countries. In 2002, the Government of India enacted the Prevention of Money Laundering Act to combat the menace of money laundering and to have measures to check the generation of illegal gains.

The Directorate of Enforcement (ED) is a law enforcement and economic intelligence agency responsible for enforcing the provisions of the Prevention of Money Laundering Act, 2002 (PMLA). It operates under the jurisdiction of Department of Revenue, Union Ministry of Finance. It is a multidisciplinary body entrusted to enforce the objectives of two special economic legislations that are:

The provisions of PMLA extend to the whole of India including the Union Territories of Jammu & Kashmir and Ladakh. The provisions of the PMLA give ED power to investigate and arrest despite that they have not been classified as ‘a police agency’. The provisions grant powers to ED to issue summons, record statements and search and seize the concerned property. The Directorate of Revenue Intelligence (DRI)[1] and Serious Fraud Investigation Office (SFIO) are also entrusted with investigating and unearthing the economic offences under other legislation.

For granting bail/anticipatory bail to accused under the Prevention of Money Laundering Act, 2002 (PMLA), the strictest measures have to be followed as the nature of the offences are grave and severe under this act.

Twin conditions for Bail under PMLA

The Section 45(1) of the Prevention of Money Laundering Act, 2002 prescribes Twin Conditions of Bail for the accused in the PMLA. In the case of Nikesh Tarachand Shah v. Union of India (2017), the Hon’ble Supreme Court of India struck down section 45(1) which imposes two conditions for the bail for the offences punishable for a term of imprisonment of more than three years under Part A of PMLA, held unconstitutional as it is violative of the fundamental rights and also it inverted the presumption of innocence which is contrasting to the basic principles of criminal jurisprudence.

The two conditions provided under the said section are:

Pursuant to this judgement, in 2018, Government of India amended the provision of bail under Prevention of Money Laundering Act which was earlier held unconstitutional.

Removed part of the Section: “punishable for a term of imprisonment of more than three years under Part A of the Schedule”.

Added in the Section: “under this Act”.

In the case of Y.S. Jagan Mohan Reddy v. C.B.I., the Hon’ble Supreme Court observed: the court while granting bail to the accused has to consider the nature of the allegations, nature of the evidence, severity of the punishment prescribed under the Act, and possibility of securing the presence of the accused at the trail, beyond reasonable apprehension that accused will not tamper the concerned evidence while out on bail.

In the case P. Chidambaram v. ED, 2019, the Hon’ble Supreme Court  has laid down some guidelines are to be considered while refusing or granting bail under PMLA. As per the criminal jurisprudence, bail is the rule and refusal of bail is an exception. In granting bail to the accused, the triple test is required to be followed along with the severity of the offence also has to be considered.

If accused has made himself available before the agencies and court whenever required in the past and cooperated with an investigative agency. In that case, this factor can be considered for grant of bail under PMLA.

If an investigative agency has already collected the primary document, which is material to the case, the scope of tampering the evidence is next to impossible and accused hasn’t tampered the document before.

The accused is staying at his permanent address for long and they are not at flight risk due strong financial position, and the accused is not previously involved in criminal activities.

However, an accused can also bring an application under the provision for bail under PMLA to High Courts only when in custody. The ED and other similar agencies are exempted from following the provisions of the Code of Criminal Procedure Code, 1973 (CrPC) in their functioning.

Courts are reluctant to grant bail to the accused due to the massive proceeds of crimes; however, many petitions have been filed to relax the strict provision for bail under PMLA, which violates the accused’s fundamental rights under Article 14 and 21. The nature of economic offences has evolved, as accused are using different and unique methods for banking frauds and evading the monitoring authorities. Given steep rise in economic crimes, economic offenders are trying to cross borders to evade arrest; the Government of India has passed a special legislation Fugitive Economic Offenders Act, 2018, to deter the fugitive from evading the process of law in India.

Read Our Article: Tracing the Developments in the Prevention of Money Laundering Act, 2002

Proceeds of crime – Meaning as pe...

In 2002, India enacted the Prevention of Money Laundering Act (Hereinafter referred to as PMLA)...