Proceeds of crime – Meaning as per Prevention of Money Laundering Act, 2002 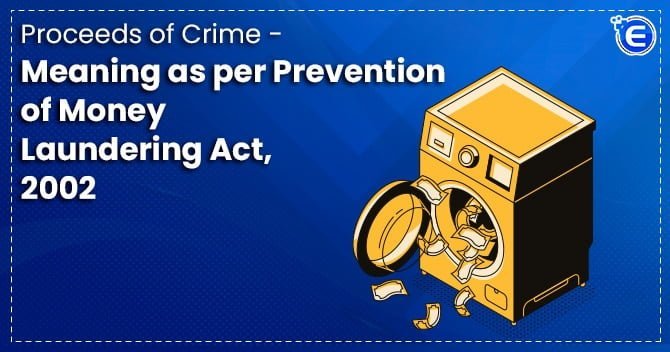 In 2002, India enacted the Prevention of Money Laundering Act (Hereinafter referred to as PMLA). It categorizes money laundering as “any process or activity connected with the ‘proceed of crime’ and showing it as untainted property”. Section 3 of the Act defines money laundering as “whosoever directly or indirectly attempts to indulge or knowingly assists or knowingly is a party or is involved in any process or activity connected with proceeds of crime and projecting it as untainted property shall be guilty of the offence of money laundering”.

To make the investigation of the Enforcement Directorate in cases of Money laundering more effective, there have been certain amendments to the definition of ‘Proceed of crime’ mentioned under 2(i)(u) through the Finance  Amendments Acts of 2015, 2018 and 2019.

POC being the very essence of money laundering cases, the Interpretation of this Clause has been the most challenging area of the Prevention of Money Laundering Act (PMLA)[1]. If we ask any legal counsel taking up money laundering cases, ‘What is the biggest challenge that he/she is facing under PMLA’? The answer would be an interpretation of ‘Proceeds of Crime’. Enforcement Directorate can attach property under PMLA only if the property is classified as ‘Proceed of Crime’.

How to classify property as a ‘Proceed of Crime’?

In very simple terms, if an individual commits an offence mentioned under the schedule of PMLA as a scheduled offence or predicate offence, then any property earned or generated out of that is called Proceeds of Crime (POC). The proceeds of crime remain the proceeds of crime, whether they are kept in the house, deposited in a bank account, or kept with somebody else. Projecting them as ‘untainted property, which is the essence of the offence punishable under section 4 of the Act, involves the offering of some explanation for the acquisition of the said property and showing it to be having a lawful source of earning.

A person ‘A’ is engaged in the counterfeiting of banknotes and earned Rs5 00,000 for committing this offence.

Here, Mr. ‘A’ has committed an Offence under section 489 A of The Indian Penal Code, 1860. Since the offences under IPC are scheduled offences under PMLA, thus, the amount of Rs  5,00,000 would be termed as POC.

Also, Mr. ‘A’ would-be separately liable for both the offences committed under the IPC and PMLA and can be tried together at the same trial.

The Finance Act of 2015 has expanded the definition by including not only the proceeds of crime present in India but also the proceeds of crime which have been moved out of India to escape from the liability under PMLA. If any person moves POC out of India, then the property in India whose value is equivalent to that will considered as POC in India. Before the amendment, the agency could not do anything because of lack of cross border jurisdiction under PMLA.

Further, the word ‘abroad’ was added to the definition of POC by the 2018 amendment, where if the proceed of crime from India is transferred to a foreign jurisdiction and the form of the POC is completely changed to disguise the origin of the proceeding, then any property of accused equivalent to the value of POC in abroad can also be considered as POC within the definition of PMLA.

Therefore the above definition, with all its amendments, has widened the power of the investigation agency under PMLA to curb the menace of Money Laundering.

Who has the power to classify property as ‘Proceed of crime?’

The Enforcement Directorate (ED) is the primary investigating agency, empowered with the enforcement of the PMLA.

After receiving the information, and conducting an investigation, an officer of the ED, being an officer not below the rank of Deputy Director, has ‘reasons to believe that a particular property is a POC, then it records his satisfaction in the form of ‘reasons to believe, and provisionally attaches the property suspected to be POC.

The officer draws up a provisional attachment order (PAO) and appends his ‘reasons’ with the aforesaid order, classifying the property as POC.

Attachment and confiscation of property

There is an extensive process of attachment and confiscation of ‘Proceeds of crime’ under PMLA. Firstly the investigation starts with a ‘provisional attachment’ of the property. This is the first step, and after that complaint is filed with an adjudicating officer assigned to do the investigation and confirm the property as POC. Thereafter the final confirmation of the POC is done upon the establishment of guilt of the accused. Three steps of attachment of property are (i) ‘provisional attachment’ under Sec 5; (ii) ‘confirmation of attachment of property under sec8 (3); and (iii) ‘confiscation’ of property under Section 8(3)(b).

‘Provisional attachment’ of proceeding of crime

As per section 5 (1) of PMLA director or any officer not below the rank of deputy director has reason to believe that the property in question is POC and the person has committed a scheduled offence, and such POC can be concealed or transferred, which further would frustrate the proceeding, can order Provisional attachment of material in Possession for a period not exceeding 90 days from the date of order, in the manner provided in the second schedule of Income Tax Act, 1961.

Confirmation of attachment of property

Subsequently, after filing a complaint, the adjudicating officers are required to examine all the facts related to the case and find whether the property provisionally attached is involved in money laundering or not. Upon examination, if the adjudicating officer is satisfied that the material in question is Proceeds of crime, he /she can pass an order of ‘confirming’ attachment of property.

At the conclusion of the trial, the special court taking up the proceeding of the money laundering case is satisfied that the offence of money laundering has been committed. Then it can order the confiscation of the property in question.

‘Proceeds of crime’ is the heart and soul of all the cases of money laundering. Therefore, the determination of POC by the enforcement Directorate requires fair and just principles of law. While assessing the POC, the interpretation of the section pertaining to that must be followed in its letter and spirit.

Read Our Article: Tracing the Developments in the Prevention of Money Laundering Act, 2002

She holds degree in B.COM, LLB (Delhi University), LLM (NLU, Delhi) and is also NET Qualified. She has previously worked as an Assistant Professor of Law in renowned university. She has a keen interest in writing on legal topics using academic and professional acumen.

Under Indian criminal law, anticipatory bail is defined under Section 438 of Criminal Procedure...

Underlining the Scope of Investigat...

The Prevention of Money Laundering Act 2002 was introduced to tackle the growing concern of mon...