Tracing the Developments in the Prevention of Money Laundering Act, 2002 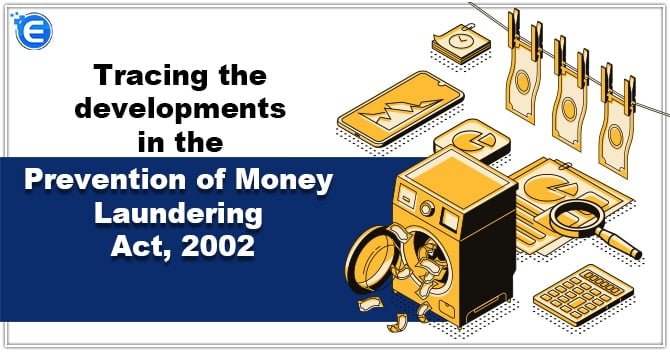 Money laundering is a tainted tactic of disguising or concealing illicit income to make it look like legitimate. This tactic has been employed worldwide to hide criminal activities associated with it like terrorism etc. To curb the instances of black money and to prevent such acts of money laundering, the government introduced the Prevention of Money Laundering Act 2002. In this article, we are looking at latest developments in the Act.

Money laundering originated in the United States with the mafia groups who made massive amounts from extortion, gambling and showed the money gained from it as legitimate money.

In India, you would have come across the term Hawala transactions which is money laundering. Money laundering is a shrewd tactic employed by launderers who spent the money in a manner which is untraceable for agencies to know the actual source of the wealth.

Money laundering can be executed with different methods, but the most common of all is by establishing fake companies called as shell companies. This company acts like a real one, but the existence of business is not real, and no investment is made by these firms. They can be found on paper but not in the reality.

The money launderer gets loans in the name of such fake business and also gets exemption from the government and accumulates enormous amount of black money from this process.

There are three different stages of money laundering:

The Act of Prevention of Money Laundering 2002

The money laundering law was implemented in 2002, but it was changed thrice. The President gave assent to the last amendment of 2012, and the legislation came into effect on 2013.

The Prevention of Money Laundering Act was aimed to fight the evil of money laundering in India with its main objective to:

The Reserve Bank, Securities Exchange Board of India and the Insurance Regulatory and Development Authority, were brought under the ambit of PML Act 2002. Thus financial institutions like banks, mutual funds, insurance firms were made subject to the provisions of this Act as the money laundering is a complex and manipulative subject.

Prevention of money laundering before 2002

Before the PMLA 2002 was enacted, there were numerous statutes that addressed the issue. Some of these were as follows:

Banks in India were not willing to do away with their strict bank secrecy policies, which allowed individuals to launder money easily. The issue of money laundering took a massive turn with hawala’s ancient underground banking system. This further degraded the situation.

The Money Laundering prevention Bill was drafted with a view to eliminate money laundering. Additionally, agreements were also made with countries to help each other in the investigation of the cases related to money laundering.

The government of India also made a comprehensive agreement in 1997 with Pakistan. The countries agreed to institute various co-operative measures to control drug trafficking and money laundering. The governments of both nations also decided to lay down mechanism to conduct joint financial investigations and information exchanges.

The PMLA 2002 has been amended under the Finance Act 2019. One of the changes made to the concept of PMLA’s proceeds of crime. It covers not just assets derived or acquired from scheduled offences but also property derived or obtained directly or indirectly due to any illegal activity related to a scheduled offence.

If a person actively or indirectly intends to engage in or intentionally participated in, knowingly is party to, or is found to be engaged in the concealing, owning, obtaining or using the property related to proceeds of crime, then such person has committed the offence of money laundering.

Scope of proceeds of crime

Explanation under Finance Act 2019– To avoid doubt, proceeds of crime includes property not only produced or obtained from scheduled offence but also a property derived or received directly or indirectly due to any unlawful activity related to the scheduled offence.

Hence the scope of Section 2(1) (u) is broadened, thus allowing proceeds resulting from an illegal activity relating to scheduled offence to be included. The word illegal activity is not defined in the Act therefore, it is enough if the authorities charged with enforcing the act get the proof that the assets were received through criminal activity.

In the case of Nikesh Tarachand Shah vs. Union of India & Anr. The constitutional validity of Section 45 of Act was challenged. The issuance of bond depends upon the two provisions. The advocate should get the opportunity to refuse any parole appeal, and the court should be satisfied that the criminal wasn’t convicted of the crime and didn’t commit any crime while he was on bail.  In this case, the change that the court will accept is the non-applicability of certain conditions under Section 45 of Prevention of Money Laundering Act[1].

Section 45 (1) of PMLA was challenged in the case of Nikesh Tarachand Shah vs. Union of India. After the examination of the Act and its history, the apex court observed that the indiscriminate implementation of Section 45 will violate Article 21 of Indian Constitution.

As per Section 45 (1) (ii), no one who was convicted of an offence punishable with more than 3 years under Part A can be released on bail provided:

Hence it can be said that the twin conditions imposed under Section 45 of the PML Act cannot be looked into at the time of deciding on bail application as it is violative of Articles 14 & 21 of the Indian Constitution.

While deciding on appeals from ED, the Delhi HC held that PMLA prevails over IBC in case of attachment of properties received as proceeds of crime. It further said that the PMLA, RDBA, SARFAESI ACT and the IBC should co-exist in harmony with PMLA.

On the flip side, the NCLT, in the case of Rotomac Global Pvt. Ltd., stated that Prevention of Money Laundering Act gets invoked with the IBC simultaneously, and neither of the laws have any overriding effect over the other.

Further clarity may be required with respect to practical implementation of the PMLA, especially in respect to the provision of attachment of property.

Like many other nations, India has also come up with policies and measures to counter the threat of money laundering through comprehensive legislation. It has made provisions for confiscation of proceeds of crime and further provided for penal actions against those involved in money laundering. However, more active involvement is required for prevention of money laundering. Financial organizations should report suspicious transactions as it can help in detecting money laundering cases by the law enforcement agencies.

Proceeds of crime – Meaning as pe...

In 2002, India enacted the Prevention of Money Laundering Act (Hereinafter referred to as PMLA)...