Underlining the Scope of Investigation under PMLA 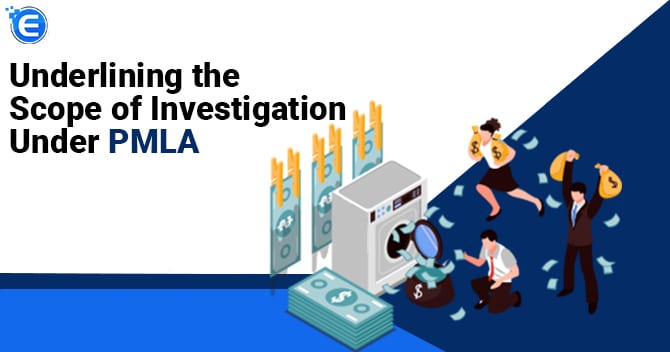 The Prevention of Money Laundering Act 2002 was introduced to tackle the growing concern of money laundering. Money laundering is a process through which a person makes massive amount of illicitly obtained money and hides its original source. The Act bestows power and authority to the investigating authorities to investigate instances of money laundering. In this article, we shall have a discussion on investigation under PMLA by proper officer, issuance of summon and its scope.

The procedure for investigation of a money laundering offence involves various stages—the investigating authority proceeds in the following manner.

The Prevention of Money-laundering Act, 2002 lays down the scope for power of officers pertaining to summon, documents production and providing evidence. Summon is issued by the authority, and it can be issued for various purposes such as for production of documents, or to provide evidence, to conduct an investigation under the Prevention of Money Laundering Act, 2002. Additionally, director, Additional Director, Joint Director and Deputy or Assistant Director can also summon a person whom he considers necessary in order to produce any records during the investigation or to hand over the evidence.

Investigation under PMLA: Power of Director

The power vested with a civil court under CPC 1973 at the time of trying a case in matters such as discovery and inspection, enforcing attendance of a person, production of records and receiving evidence, issuing commissions of examination of witnesses and documents, have also been conferred on the authority exercising power under Section 50. (G.RadhaKrishnan vs. Ass. Director (2014)).

Further, every proceeding under sub-section (2) and (3) of Section 50 (PMLA) is deemed to be judicial proceeding. This was held in the case of B. Narayanaswamy vs. Deputy Director and others (2019).

Also, Section 50(5) of the PML Act provides that on behalf of the central government, an officer whether director, add. Director, joint director, deputy director can impound and keep records in his custody for a period, he thinks fit.

Essential points to note during Investigation under PMLA

Relevancy of Statements recorded after arrest

If an accused person is forced to be a witness against himself, then it violates the principle enshrined in Article 20(3) as the officers of ED can force individuals to give statement through undue influence. If the statement is recorded after the arrest of the suspect by force then it shall be inadmissible. Moreover, recorded statements should stand the test of the trial to be relevant.

In a case, it was seen that the accused persons had retracted their statements and said that the statement recorded earlier was under threat and forcefully recorded. The Hon’ble court held that the statement obtained through any improper means should be rejected immediately.

Read our article:Tracing the Developments in the Prevention of Money Laundering Act, 2002

The Supreme Court recently on 14th February, 2022 declared that there exists no provision under...

Recently, the Appellate Tribunal of Prevention of Money Laundering Act, 2002 (PMLA) came across...