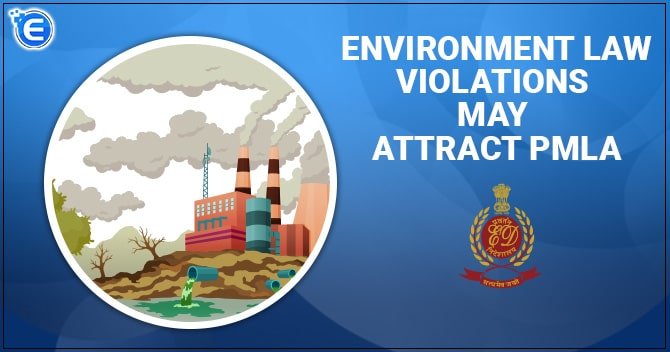 Recently the National Green Tribunal (NGT) has rebuked New Okhla Industrial Development Authority (NOIDA) for issuing partial occupancy certificates to the builders which they used to sell units in their real estate projects to the allottees without installing a proper sewage treatment plant in their projects. The NGT further directed the Enforcement Directorate to take action against the developers for committing offences under Water (Prevention and Control of Pollution) Act, 1974 and Air (Prevention and Control) Act, 1981. The NGT further ordered the ED to initiate proceedings under Prevention of Money Laundering Act, 2002 (PMLA) against the culprit developers.

A complaint was filed by a resident of NOIDA in relation to the disposal of untreated sewage waste directly into the irrigation canal in the Gautam Buddh Nagar district.

Earning money by committing offences under Air Act, Water Act and Environment Protect Act amounts to an offence under section 3 of the PMLA, 2002. The Enforcement Directorate needs to look into the matter to proceed against violators and colluders in such offences, as per the mandate of the law.

This means commission of specefic violations under statutes relating environment law may attract proceedings under PMLA.

What does section 3 of PMLA talk about?

Section 3 of the Prevention of Money Laundering Act, 2002 (PMLA) states that any person who directly or indirectly attempts, indulges, assists or knowingly is a party and involved in any process or any other activity which deals in the proceeds of crime which includes its possession, acquisition, concealment or use and projecting it or claiming it as it were an untainted property shall be guilty of money laundering.

What does section 133 of Criminal Procedure Code talk about?

Section 133 of Criminal Procedure Code talks about the urgent removal of public nuisance. Whenever a District Magistrate (DM) or Sub-Divisional Magistrate (SDM) or any other Executive Magistrate appointed by the government on this behalf gets any information from the police report or any other information and on the basis of such information if he thinks fit that the conduct of any trade or occupation is injurious to the health and comfort of the public and that trade and occupation should be prohibited or regulated or the said goods should be removed, then the said officer may give a conditional order requiring such person to desist from carrying such trade or occupation within a fixed time.

If there is any objection raised by such person then he must show cause why his trade and occupation must not be stopped.

Offences related to environment protection for which PMLA can be triggered

The PMLA prescribes the following acts against environment protections which can trigger the provisions of PMLA.

shall be liable, for every failure and contravention so made by the person, for

It must be noted that such acts are continuing offences. For every contravention or failure

Shall be liable with

Shall be liable with

If the failure continues after the conviction for the first failure, then for every day of continued failure an additional fine of Rupees five thousand shall be imposed on such operator.

If the above mentioned failure continues for a period more than one year then the imprisonment shall not be less than two years and can extend upto seven years.

What is an ‘occupancy certificate’?

This certificate is taken by the builder from the local competent authority.

NGT order on initiation of PMLA proceedings against Builders

Taking into the account the drainage of untreated sewage waste into the Shahdra and Kondli drains and irrigation canals by the Delhi, Ghaziabad and NOIDA auithorities, the NGT has asked the police to register criminal cases against the perpetrators.

Further, the concerned authority i.e. NOIDA was also rebuked by the bench for issuing faulty partial occupancy certificates to the builders without checking whether proper installation of Sewage Treatment Plants (STPs) have been done by the developers or not. This untreated sewage waste then gets drained into the Yamuna river polluting it further.

The bench was headed by the Chairperson of the NGT, Justice Adarsh Kumar Goel. The bench said that STPs should have been in proper working conditions before the authority granted occupancy certificates for the real estate projects. The chairperson found that out of the seventy two sewage treatment plants under question only twelve among them have been found to be functioning properly. Rest of the units have either been found to be faulty or not installed properly releasing pollutants in the environment which is against the provisions mentioned under the above mentioned acts.

The Bench observed that the reports submitted by the authority indicated compliance of all the necessary requirements whereas the new reports reflect outright violations of the environmental norms by the developers.

Plea was taken by the investigating authorities that they could not register criminal offences against the misdoings of the promoters since the impugned acts were covered under special legislations such as Environment Protection Act and Air and Water Acts.

The court directed that even though the impugned acts were covered under the above mentioned special legislations, the perpetrators have also committed offences under IPC and PMLA. Hence, action under section 133 of CrPC must also be initiated against them.

The Chief Executive Officer (CEO) of the NOIDA also pitched in and assured the bench that she will personally oversee the matter and see to it that all the compliances are done by the promoters. The bench is of the opinion that a dedicated cell of the environment compliance professionals will be required with the support of accredited agencies and community involvement to proceed before occupancy certificates are issued to these perpetrators.

The Bench directed the NOIDA authority and other stakeholders such as the Central Pollution Control Board, Chief Secretary of Delhi and the Department of Urban Development to follow up on the compliances taken by them and file the compliance status within three months by email.

Clause (b) of sub section (4) of Section 11 of Real Estate Regulation Act, 2016 (RERA) makes it mandatory for the promoters or builder of the project to obtain Occupancy Certificate (OC) before handing possession of the units in their project to the allottees. Transfer of the possession of the unit to the allottees without providing them with a legal and valid OC amounts to an offence under RERA under section 61 of the Act.

If a building is not granted an OC, then it is considered as an under construction project. Those who have been given possession of the property without a valid OC can be evicted out from the property since technically and legally, the dwelling unit have not become fit for occupation and hence they have not become the true owners of the property because of the existence of a faulty OC.

In the instant case, the NGT is of the opinion that since the possession of the property has been given without the valid legal procedure of providing a valid legal Occupancy Certificate to the allottees, it amounts to an illegal transfer of property. This act of illegal transfer of the immovable property to the allottees triggers section 3 of Prevention of Money Laundering Act, 2002 triggering the relevant proceedings of Enforcement Directorate (ED) against the builders/promoters at default.

Further, the schedule of the PMLA lists down certain prohibited acts under the statutes related to the environment protection, defiance and violations of which may trigger proceedings under PMLA against the perpetrators. The prohibited acts which have been listed down are related to the Environment Protection Act, 1989, Air (Prevention and Control) Act, 1981 and Water (Prevention and Control of Pollution) Act, 1974.

Proceeding against the builders under the provisions of PMLA for violating the provisions of Environment Protection Act, Air Act and Water Act will force the builders to take care of the necessary compliances including installation of sewage treatment plants and providing the allottees legally valid Occupancy Certificate. The order of the NGT must send across an alarming bell for all the builders who have given faulty occupancy certificates to their allotttees doing which, among host of other proceedings, the proceedings under PMLA shall be initiated against them. Therefore, it becomes very much important that violations of environment protection are not committed by the builders. Instead, the builders must hire a good team of environment compliance professionals which will take care of all the compliances related to their projects and see to it that no penalties and other penal actions are initiated against them.

Read our article:Underlining the Scope of Investigation under PMLA

What are the ways to combat money l...

Recently, a spurt in the activities of the Enforcement Directorate and FIU has been observed wi...

Understanding the Implications of P...