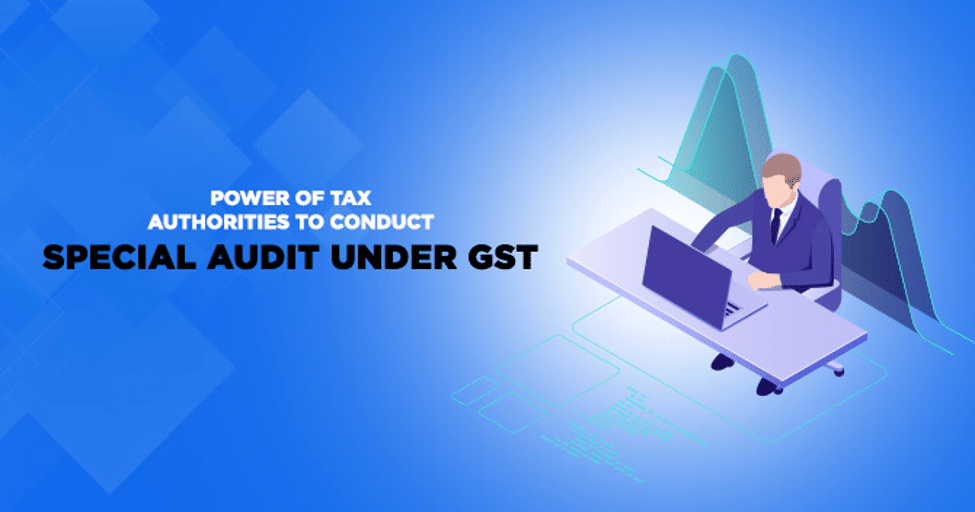 GST is a type of trust-based regime of taxation wherein a registered GST dealer is required to self-assess his returns, compute his tax liability, and deposit taxes without any intervention by the department or tax officials.

Since the GST tax regime is mostly dependent upon self-assessment, therefore, a holistic and robust audit mechanism has been put into place by the department to evaluate the GST liabilities and to assure a taxpayer’s compliance with the relevant provisions of GST law.

Definition of Audit under GST

An audit under GST aims to verify that the tax declaration has been correctly made by the registered persons, payment of taxes and refunds are accurately determined, and input tax credits are availed by taxpayers in conformity with the provisions of the Act.

What are the different types of audit from GST perspective?

Three kinds of audit are defined in GST:

Section 66 of the CGST/SGST Act gives a special power to GST authorities to conduct a special audit of taxpayers in certain cases.

When is Special Audit under GST conducted?

The GST authorities may conduct a special audit if, at any stage of scrutiny, inquiry, investigations or any other proceedings, they believe that the value of the tax is not correctly declared or input tax credit availed is not within the normal limits. In other words, when the department holds doubts about the accuracy of GST details declared by a registered taxpayer, it may conduct a special audit.

But usually, a special audit is instituted in limited circumstances where a complex case is brought to the notice of the department or when the revenue stake is high.

Special Audit under GST is conducted by whom?

Who shall issue a notice of communication for special audit under GST?

The communication for the special audit has to be served to the concerned taxpayer by the Assistant Commissioner/Deputy Commissioner or any officer senior to him. Prior approval of the Commissioner is, however, necessary for the same.

The Assistant Commissioner or any officer senior to him can, by issuing FORM GST ADT-03, direct the registered taxpayer to get his records including books of account examined and audited by a specified chartered accountant or a cost accountant.

Who shall bear the cost of special audit?

All the expenses pertaining to special audit are to be determined and borne by the Commissioner. The term ‘expenses’ here is construed in a manner so as to comprise the remuneration payable to the chartered accountant or cost accountant.

The time limit for completion of special audit

The designated chartered accountant or cost accountant needs to submit an audit report within a period of 90 days of the direction issued by the department, duly signed and certified by him. Such a report needs to be furnished to the Assistant Commissioner.

However, this period may be further extended by the Assistant Commissioner by another 90 days in case an application for the same is made by the concerned taxpayer or the chartered accountant or cost accountant.

Immaterial if accounts are already audited

Communication of findings of special audit

Once the procedures of a special audit are concluded, the registered taxpayer is duly informed on the findings of the special audit. Such communication is done in the prescribed FORM GST ADT-04.

What action can be taken by the GST authorities after the completion of a special audit?

Depending upon the findings or observations of the special audit, the tax authorities may initiate appropriate action against the registered person under Section 73 or Section 74. This may be with regard to the demand and recovery of tax unpaid, erroneously paid or refunded, ITC fraudulently claimed, or tax short paid.

An opportunity of being heard to the taxpayer

In respect of any material information procured under special audit and before initiating any proceedings against a registered person under GST, the taxpayer is usually accorded a reasonable opportunity of being heard.

A special audit under GST offers a legitimate means to the tax officials to determine the tax liabilities of assessees in complex cases.

It allows the GST authorities to take the assistance of the professional expertise of a chartered accountant or a cost accountant in order to ensure that the interest of revenue is safeguarded at all times.

GST is a Value-added Tax, it is a single indirect tax levy on manufacture, sale, import, and co...

How to Apply for GST Registration O...

One can apply for online GST registration, for that it is compulsory for a taxpayer to provide...