What is the Objective of Business Takeover? 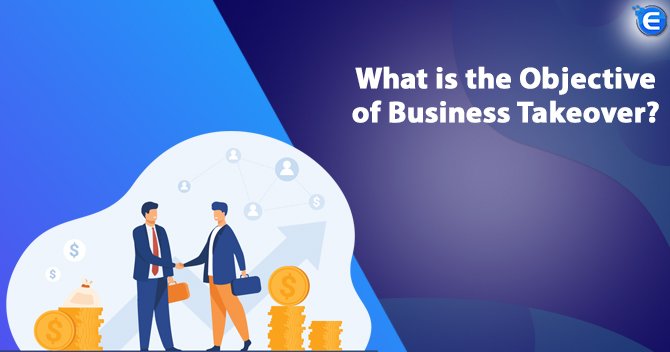 Business takeover helps in achieving a lot of benefits. It helps in increasing market potential, expanding consumer base etc. In this article, we will discuss the objective of Business Takeover along with its types.

What are the Types of Business Takeover?

Business Takeovers may be broadly classified into three kinds:

(i) Friendly Takeover: Friendly takeover is with the consent taken by the company. In a friendly business takeover, there is an agreement between the management of two companies through negotiations and the takeover bid maybe with the consent of majority or all shareholders of the target company. This kind of takeover is done through negotiations between two groups. Therefore, it is also called a negotiated takeover.

(ii) Hostile Takeover: It is a kind of business takeover where an acquirer company doesn’t offer Target Company proposal to acquire its undertaking but silently and unilaterally takes pains to gain control against the wishes of existing management.

(iii) Bail Out Takeover: A Business takeover of the financially sick company by profit-earning company to bail. Out the former is known as a bailout take over. There are several advantages of a profit-making company to take over a sick company. The price would be very attractive to creditors, mostly banks and financial institutions having a charge on the industrial assets would like to recover to the extent possible.

Banks and other lending financial institutions would evaluate various options and if there is no other go except to sell the property, they will invite bids. Such a sale could take place in the form of transfer of shares. While identifying a party (acquirer), lenders do evaluate the bids received, the purchase price, the track record of the acquirer and the overall financial position of the acquirer. Thus a bailout takeover takes place with the approval of the Financial Institutions and Banks.

An acquirer shall have to appoint a category I merchant banker who is not associate of or member group of the acquirer or the target company before making a public announcement.

The acquirer has to make the public offer to acquire the shares of the target company for a minimum of 20% of the voting capital. It should not be less than 20%.

It is an announcement made by the acquirer through a merchant banker disclosing his intention to acquire a minimum of 20% of shares/ voting rights of the target company. Public announcement shall be made in one, English daily and one in a vernacular language daily newspaper circulating in the state where the registered office of the target company is situated and the stock exchange where the shares are most traded. The announcement must contain the details about the offer price, a number of shares to be acquired from public, purpose, future plans, and details of acquirer and period of the offer.

The acquirer shall open an escrow account for 25% of the consideration of offer size is less than Rs. 100 cr. and 10% for the excess of consideration above Rs. 100 cr., with a scheduled bank.

The acquirer shall within 14 days of the public announcement send a copy of draft LO to the target company and all stock exchanges. LO shall be dispatched to the shareholders within 21 days from submission to SEBI[1].

A public announcement will be made only when the acquirer is capable of implementing the offer. During the offer period, the acquirer or persons acting in concert will not be entitled to be appointed on Board of the target company.

The obligation of the Board of Target Co. /Merchant Banker: [Regulation 23 & 24]

After public announcement or offer the board of the target company, unless approved by the members at a general body meeting shall not sell, transfer or dispose of assets of the company or its subsidiaries or issue or allow any un-issued securities or enter into any material contracts. The Merchant Banker shall have to send a final report to SEBI within 45 days from the date of closure of the offer.

Business takeover can be in any form whether friendly, hostile or bail out takeover. A business takeover can serve various needs and it’s done with a view to fulfil above mentioned objectives. In case you have any query related to the same, contact Enterslice.

The Major Challenges Faced by Housi...

Housing Finance is a broad topic, the idea of which can differ across continents, regions &...