A Complete Analysis of RBI Exposure Norms for NBFC in India 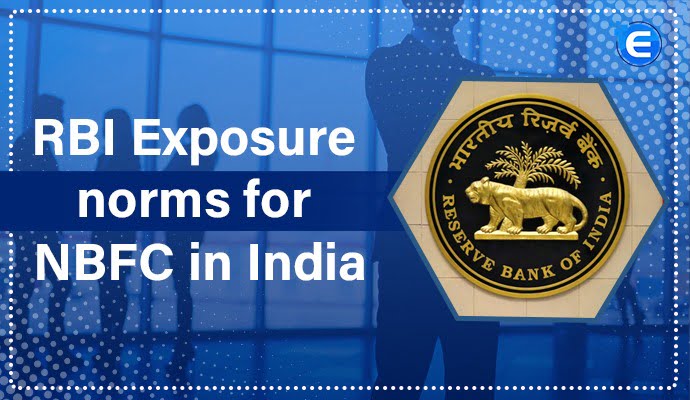 Non-Banking Financial Company (Commonly abbreviated as NBFC) is a company registered under the Companies Act, 2013, who is engaged in the business of advancing loans, acquisition of securities, hire-purchase business, etc. The administration of NBFCs is regulated by the Reserve Bank of India (RBI) under Chapter III-B of Reserve Bank of India Act, 1934.  However NBFC are not allowed to participate in agriculture and industrial activities, purchase or sale of any good (except securities) or any other immovable properties. RBI have announced their RBI exposure norms for NBFC in India to narrow down the regulatory arbitrage that existed between the banks and NBFCs

What Are RBI Exposure Norms For NBFC In India, 2019?

RBI[1] had announced theirRBI exposure norms for NBFC in India on April 1, 2019 which will come into effect from October 1, 2022, to narrow down the regulatory arbitrage that existed between the banks and NBFCs

The structure for NBFCs will be divided into four layers based on their size, activity, and perceived riskiness. The lowest layer is base layer, followed by middle, upper and top layers. However, these RBI exposure norms for NBFC in India will only be applicable to middle and upper layers. The upper layer of NBFCs include those who are yet to notified, while the middle layer of NBFCs are those which have an asset of Rs 1,000 crore or more, including deposit-taking and non-deposit taking NBFCs.

Under the revised guidelines on large exposure RBI exposure norms for NBFC in India that has come into effect from April 1, 2019, RBI have raised the bank’s exposure limit to a single NBFC 20% of the upper layer which can be extended to 25 per cent under exceptional circumstances as per the decision taken by banks Boards. Now, the bank are also allowed to lend money to registered NBFCs (other than MFIs), subject to certain conditions as prescribed by the RBI in the further notifications.

RBI have also directed the banks to keep agricultural sectors, MSMEs and affordable housing to be treated as priority sector lending and increased exposure limits of bank lending to NBFCs from 15 to 20%. The Banks are allowed can now lend agriculture up to Rs 10 lakhs, up to Rs 20 lakhs to micro and small enterprises (MSMEs) and up to Rs 20 lakhs to the housing sector per borrower.

However, the aggregate for lending to the infrastructure finance companies, will be 30% of the capital base to a single entity and 25% of the capital base for a group of connected entities of NBFCs, apart from infrastructure finance companies where it will be 35%. While appraising loan proposals for the real estate sector, NBFCs should ensure that the borrowers have obtained prior permission from the applicable government, or other statutory authorities for the project.

RBI have also directed NBFCs to limit their grant of loan of Rs. 5 crore and above to their directors, senior employees and their relatives (including partner, manager, employee or guarantor), unless sanctioned by the board. Loan proposals given to any of the directors or his senior employees must mandatorily be reported to the board of the company. However, any amount of loans given to his employees against government securities, life insurance policies, fixed term deposits, stocks and shares (securities); housing loans and car loans under any scheme applicable will be exempted from these guidelines.

RBI has also directed to all the non-bank lenders will have to disclose their exposure to real estate sector, capital market, intra-group entities, and unhedged foreign currency exposure. The RBI has asked NBFCs to disclose asset classification and provisioning requirements in their annual financial statements if the said additional provisioning requirements exceed 5 per cent of the reported profit before tax and impairment loss on financial instruments for the particular period.

If the additional gross non-performing assets (NPA), as identified by the RBI exceeds 5 per cent of the reported gross NPAs for the particular period, then also a detailed disclosure will have to be given by the NBFC.

Further, the central bank has asked all NBFCs to make additional disclosures in their notes to accounts, including disclose their exposures to various sectors such as agriculture capital market, intra-group exposure, and unhedged foreign currency and business and personal loans, and others allied activities.

These guidelines will be effective for annual financial statements for the year ending March 31, 2023, and onwards.

What will the effect of RBI exposure norms for NBFC in India?

RBI has introduced RBI exposure norms for NBFC in India to narrow down the regulatory arbitrage that existed between the banks and NBFCs. Consequently, Large capped companies will now be barred to undertake any further exposure of lending capacity (at the entity or group level) except if sanctioned by the board. The RBI has also warned that if any NBFC fails to comply with the RBI exposure norms for NBFC in India, it may lead to imposition of penalties on the NBFCs.

According to the RBI official report the RBI exposure norms for NBFC in India will be implemented with a view to support  certain priority sectors including NBFCs which plays a greater role in the economic growth in terms of export and employment, by providing credit to these sectors, subject to certain conditions, bank lending to registered NBFCs (other than MFIs). These guidelines are meant to bring further harmonizing regulations between banks and non-banks.

RBI exposure norms for NBFC in India would bring structural changes in the economy which would strengthen the governance framework which would ensure a healthy growth for the sector.

The Reserve Bank of India has exposure norms for NBFC in India The circular issued April 19 and will come into effect from October, 2022. , RBI have raised the bank’s exposure limit to a single NBFC 20% of the upper layer which can be extended to 25 per cent under exceptional circumstances as per the decision taken by banks board  by keeping  agricultural sectors, MSMEs and affordable housing to be treated as priority. RBI along with Central Bank also have directed to all the non-bank lenders will have to disclose their exposure to real estate sector, capital market, intra-group entities, unhedged foreign currency exposure,  asset classification and provisioning requirements in their annual financial statements from 2023.

Read Our Article: What is a Non Banking Financial Company (NBFC)?

Shivam is an enthusiastic and intellectual Legal Researcher. He has studied Law, and after practicing as an Advocate, his interest towards writing drew him to choose a different career path and start working as a Legal Researcher, where he plans to use his acumen to curate informative content.

The term NBFC stands for Non-Banking Financial Company which is registered under the Companies...

The Associated Chambers of Commerce and Industry (ASSOCHAM) which voices the interests of trade...

On 16th May, 2019 the Reserve Bank of India (RBI) made it mandatory for Non-Banking Financial C...