Special Liquidity Scheme for NBFCs and HFCs through SPV 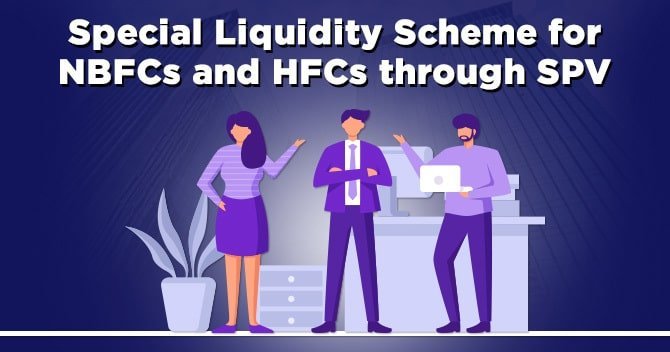 The union ministry announced the launch of a Special Liquidity Scheme recently to improve the liquidity position of Non-Banking Financial Companies (NBFCs) and HFCs. The Reserve Bank of India will provide funds for this scheme by subscribing to the government guaranteed special securities issued by the trust.

What are NBFCs and HFCs?

A Non-Banking Financial Company (NBFC) is a company engaged in the business of loans and advances, acquisition of shares/bonds/stocks/debentures/securities issued by the government or the local authority or other marketable securities.

The Housing Finance Companies (HFCs) are entities set up under a license by the National Housing Board (NHB) to provide home loans according to the guidelines of NHB.

What is the Special Liquidity Scheme?

The scheme provides for a Special Purpose Vehicle to manage Stressed Asset Fund, whose special securities are guaranteed by the Government of India (GOI) and purchased by RBI. The proceeds from the sale of securities can then be used by the Special Purpose Vehicle to acquire NBFCs/HFCs’ short term debt with residual maturity of three months. The Special Liquidity Scheme shall be administered by the Department of Financial Services under the Ministry of Finance.

Who is eligible to borrow under the Special Liquidity Scheme?

The Reserve Bank of India has laid down the following eligibility for NBFCs and HFCs:

What does the notification state further?

According to the decision of the government, SBICAP, which is a subsidiary of the State Bank of India, has set up a Special Purpose Vehicle to manage this operation. The Special Purpose Vehicle will purchase the short term papers from eligible NBFCs/HFCs, who will then use the proceeds under the scheme solely for the purpose of extinguishing existing liabilities.

The instruments shall be Commercial Papers (CPs) and Non-Convertible Debentures (NCDs) with a residual maturity of not more than 3 months and rated as investment grade. It further states that the facility shall not be available for any paper issued after 30th September 2020, and the Special Purpose Vehicle would cease to make fresh purchases after 30th September 2020 and will recover all dues by 31st December 2020 or as may be modified subsequently under the scheme.

What are the benefits under the Special Liquidity Scheme?

This scheme has the following benefits:

Investment by the Special Purpose Vehicle

The SPV set up under the scheme has an investment committee. Such an investment committee shall decide the amount to be invested in a particular NBFC/HFC. The FAQs provided in the SBICAP mentions that the trust shall invest not more than 2000 crore rupees on anyone NBFC/HFC provided that they meet the conditions contained in the scheme. The trust may have an allocation of up to 30% to NBFCs/HFCs with an asset size of 1000 crore rupees or less.

Rate of Return and Collateral

Rate of return and other particulars under the scheme will be based most likely on mutual negotiation between the NBFCs and the trust. The yield on securities invested by the SPV will be decided by the Investment Committee as per the provisions of the scheme.

Financial implication for the Central government

However, it may be noted that on invocation, the extent of government facility shall be equal to the amount of default subject to the guarantee ceiling that is set at 30000 crore rupees.

As far as the period of the special liquidity scheme is concerned, it will remain open for three months until 30th September 2020 for making subscriptions by the trust.

The period of lending by the trust will be for a period of up to 90 days.

The Special Liquidity Scheme looks promising as it seems that it will provide sufficient liquidity to the NBFC sector for the near term and is like a bailout package for their short term liabilities. However, it may be noted that heads of many NBFCs were of the opinion that this scheme will provide a short term liquidity cushion and may not solve the liquidity mismatch challenge.

If we talk about the financial sector of India, it is under the rapid growth in terms of both e...

On October 22, 2021, the Reserve Bank of India announced a scale based revised regulatory frame...

How to Start a Payday Loan Business...

Money may not be all that it’s cracked up to be but, at the same time who doesn’t want a fe...