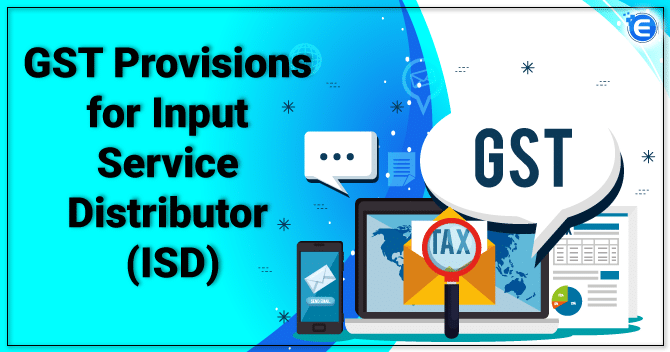 Central Goods and Service Tax Act, 2017[1] provides its definition in Sub-Section (61) of Section 2.It means an office of the supplier of goods or services or both that receives tax invoices issued under section 31 towards the receipt of input services and issues a prescribed document for purpose of distributing the credit of central, state, integrated or union territory tax paid on the said services to the supplier of taxable goods or services or both having same PAN as that of the said office. Input service distributor is a business which receives invoices for services used by its branches. It distributes the tax paid to branches on a proportional basis by issuing an ISD invoice.

When does the Tax Liability Arise to ISD (Input Service Distributor)?

As one of the major features is the distribution of input credit, it is compulsory for them to get GST Registration Certificate and acquire a GSTIN.

But, the tax liability to ISD would arise at the time of supply of services, which would be paid on the utilization of available input tax credit.

As per the GST Act, the due date of filing GSTR 6 is 13 of the next month. GSTR 6 has to be filed by every Input Service Distributor even if it is a nil return.

Distribution of ITC by ISD

Input Tax Credit accumulated can be of two sorts:

The concept of Input Service Distributors is made available to business having large share of common expenditure. The mechanism simplifies the credit taking process for entities and the facility is expected to strengthen the seamless flow of credit under GST.

Read our article:An Exhaustive List of GST Notifications Issued: Extension of due dates

Offences and Penalties under GST in...

For effective implementation of GST law, it requires strict action against the tax offenders. T...

Impact of GST on Tour and Travel In...

The Indian tour and travel industry which is valued at around 22 billion dollars in the year 20...