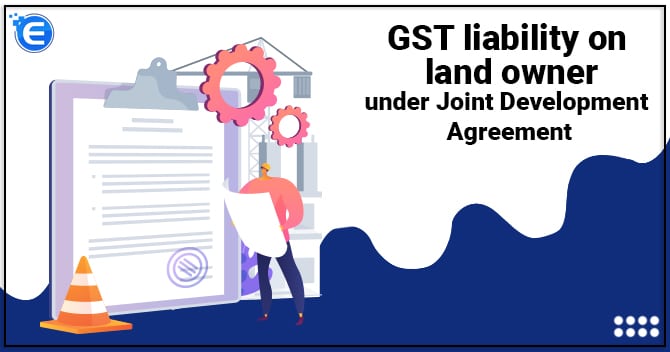 What is Joint Development Agreement?

This agreement is an arrangement between the landowner and the builder/developer where the landowner contributes his land, and the developer takes the responsibility to obtain approval, construction and marketing the project with financial resources.

Here developer-promoter is a promoter who constructs/converts a building into apartments or develops a plot for sale. In such a scenario- the developer must pay GST return on total value of construction when he sells them to both buyer and the land owner.

According to Section 2 (zk) (Real Estate Regulation and Development Act 2016[1]), promoter refers to a person who constructs or causes to construct an independent building or a building consisting of apartments or converts an existing building or a part thereof into apartments, to sell all or some of the apartments to other persons & includes his assignees.

Provision of levying tax under GST

A builder or developer constructs the property for the purpose of sale under JDA. The builder takes full responsibility of construction and marketing. As stated earlier, the builder is responsible for planning, designing, getting approvals from different departments and payment of taxes.

The land owner does not have any role in JDA apart from taking proportionate build up area equal to his land value. The judicial pronouncements also express the same.

The construction of buildings/apartments undertaken by a builder is a works contract. The works contract is an indivisible contract that involves supply of goods and labour.

Thus, as prescribed under Schedule II (5) (b), the construction of apartments for sale shall be considered as services provided by the builder. Therefore the provision levy under GST is only on construction of complex, building or a part thereof, including a complex or building intended for sale to the buyer, and it is not on the build up or developed area.

According to section 31 (6), where the supply of services ceases under a contract prior to completion of the supply, the invoice will be issued at the time when the supply ceases. Such invoice would be issued to the extent of the supply made before cessation.

Thus, in case where the builder hands over the share of land owners’ apartment after the payment of related GST, such property becomes immoveable property in buyers’ hands as provided under Item 5- Land and Building of Schedule III of the CGST Act.

The GST composition scheme has been introduced to promote SME in India. It has several benefits...

Can Electronic Credit Ledger be use...

The payment of the mandatory pre-deposit of 10% of the disputed amount of tax when filing an ap...

A Complete Assessment of GST on Oce...

The shipping industry is an essential part of global freight transportation, and it manages glo...