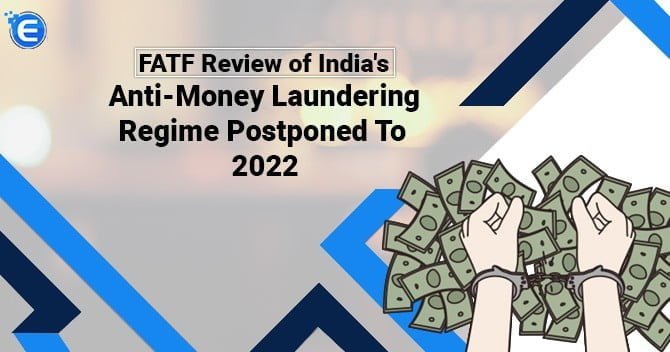 The global organization, Financial Action Task Force’s (FATF) evaluation of India’s anti-money laundering and countering terrorist financing regime is postponed again due to the current Covid-19 pandemic. As per the official statement, FATF review will be initiated next year, i.e., 2022.

It is an inter-governmental decision making body and was established by G7 summit held in Paris. Further, it is a body that seeks to produce national legislative and regulatory reforms in money laundering. As the threat of money laundering was growing across nations, FATF was set up to help eliminate this threat.

The Financial Action Task Force or FATF is a global money laundering and terrorist financing watchdog that specifies international standards to prevent economic crimes and financial crimes in a country with inter-connected linkages across the globe.

FATF also conducts peer reviews of every member on an ongoing basis. It is done to assess levels of implementation of the FATF recommendations and provides an in-depth description as well as analysis of every country’s system for preventing criminal abuse of the financial system.

The Paris-headquartered watchdog, FATF, had earlier scheduled to evaluate India’s anti-money laundering and countering terrorist financing regime on Sep-Oct last year. However, in view of the coronavirus outbreak, this schedule was revised and postponed to February 2021 by the FATF secretariat.

Now, as per a senior government official, the schedule for FATF mutual evaluation is now again postponed to next year and is expected to begin in Sep 2022. Another official aware of these development specified that according to this re-scheduled assessment calendar, the technical evaluation of India’s anti-money laundering and countering terrorist financing regime and the role of relevant legal framework and agencies that enforce this measure shall commence in Sep 2022, followed by an on-site visit of experts from FATF to the nation in subsequent year, i.e. Feb 2023.

The FATF plenary, planned to be held in October 2023, shall discuss about the Indian assessment, and its evaluation report shall be published for public consumption after 10 months after the date of the on-site visit (Feb. 2023)

It may be noted that the last FATF review of India’s anti-money laundering and terrorist financing regime took place in 2010. Usually, it is taken up after a period of 10 years. After the last review, FATF made a statement in 2013 that India has made significant progress in addressing the deficiencies that were identified in its mutual evaluation report and the FATF took the decision to remove the country from the regular follow-up process.

In the year 2019, India set up a joint working group which involved 22 central investigation, intelligence gathering and regulatory agencies to come up with presentations, hold discussions and brief experts of the FATF, drawn from various countries, once the process begins.

The FATF stated that the dates for mutual evaluation of countries like India shall be rescheduled as soon as possible. It further said that due to the emergency situation (Covid-19), the FATF and FATF-style regional bodies are implementing certain precautionary measures that impact scheduled on-site visits and discussions on mutual evaluation. Further, as the situation goes forward, the information can be regularly updated but is subjected to changes. It specified that India’s possible on-site period is to be confirmed.

During the evaluation, the Indian financial regulatory, as well as enforcement agencies, will showcase their action taken reports for the enforcement, regulatory and investigative work under the law of anti-money laundering, criminal tax evasion instance, and to strengthen the regime of combating financing of terrorism.

The rules made under the Prevention of Money Laundering Act, its outcomes and adherence to the KYC procedures would be the aspects which FATF experts would be informed about.

The following will be the part of the Indian presentation to the FATF review team:

The FATF review may take about a year to finish. As said earlier, FATF earlier scheduled to evaluate India on Sep-Oct last year. However, in view of the coronavirus outbreak, this schedule was revised and postponed to February 2021, but now it has been postponed again to 2022.

The Central KYC (Know Your Customer) Registry is a centralized depository of KYC documents of t...