The Concept of Tax Evasion and Tax Avoidance: Definition and Differences 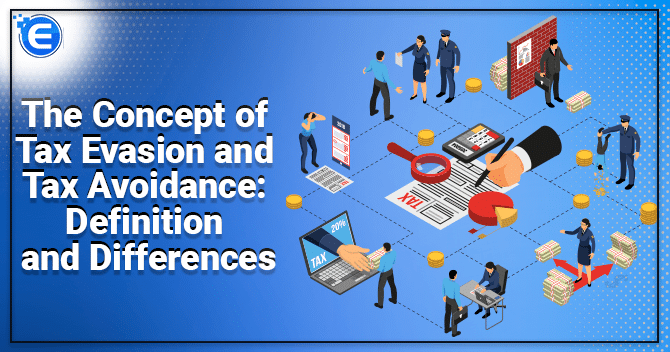 Every individual desires to pay a minimum amount in tax and there is nothing wrong with that as it totally depends on what methods a person is using to reduce them. Tax evasion and tax avoidance are two terms which aim to fulfil a common purpose i.e. ‘To decrease the sum of tax from an individual, or a legal person’s income’. Though these methods fulfil the same purpose one method aims to fulfil the purpose in a legitimate manner and another in an illegitimate manner. These two techniques are applied and used by many individuals for the purpose of deescalating their tax liability. The fundamental differences between these two are that Tax avoidance is completely legal and does not attract any criminal penalty on the other hand tax evasion is a criminal offence

What is Tax Avoidance?

In simple terms, Tax Avoidance is a practice of using legitimate means to pay the lowest amount of tax. You don’t have to depend on using illegal methods to lower your taxes. In this method, a person or a legal entity takes advantage of the ambiguities and loopholes in the income tax system. Since this method is completely legal, this is an ideal way to reduce your tax burden.

Tax avoidance is a method to cut the taxes through the legal means provided by the government but before analysing more, it is crucial to understand the Tax avoidance from depth.

Here are the following characteristics of Tax Avoidance:

There are various cases with respect to the concept of Tax Avoidance but the judgement pronounced by Justice Chinnapa Reddy’s in the case of McDowell’s case has its own importance. The case highlighted the dissimilarity between the concept of tax evasion and tax avoidance[1] in a concise manner, it defines that “the art of dodging tax without breaking the law”. The concept of tax avoidance can be traced back from the case of IRC v. Duke of Westminster; the justice stated “Every Man is entitled to conduct his affairs so the tax charged in the act would be less. If he succeeds in ordering them so as to secure this result, then, however ungrateful the commissioners of tax department may be of his ingenuity, the individual cannot be compelled to pay higher tax.”

Some of the examples of Tax Avoidance:

What is Tax Evasion?

Tax Evasion means using unlawful methods to avoid paying taxes. It is a criminal offence in which a business entity or an individual hides their part of income for the sole purpose save an additional amount of tax. This is an illegal method all around the globe. In simple terms, it is non-payment of taxes simply by not reporting them to the income tax authorities or by using the deductions which are not legal.

There are various cases with respect to the concept of Tax Evasion. In the matter of Union of India v. Play world Electronics Pvt. Ltd the court stated that “It is the obligation of every citizen to pay the taxes honestly without resorting to subterfuges”. In another case of Calcutta Cromotyoe Ltd. V. Collector of C. Ex, Calcutta, The Hon’ble SC observed that “Colourable devices cannot be a part of calculating tax in the country. There are doubtful methods resorting to trick the authority by avoiding payment of taxes cannot be categorised and applauded in this society. Such acts would be considered as criminal in nature.”

Some of the examples of the Tax Evasion:

The terms Tax Evasion and Tax Avoidance are frequently used interchangeably. These both methods fulfil a similar purpose, which is to reduce the tax liabilities.

The core differences which can be determined from these two methods of cutting taxes are as follows:

It is concluded from the above discussion that both the concepts of Tax Evasion and Tax Avoidance fulfils a similar goal to reduce the tax but one fulfils this purpose by legal means and another through illegal medium. The government of India has provided certain ways in which an individual or a legal entity can restrain taxes on his income whereas, in tax evasion, the government have issued various penalties.

Read our article:Get Clarity on the Difference between Tax Planning and Tax Avoidance

A tax levied on its net income or profits earned through its business is known as Corporate Tax...