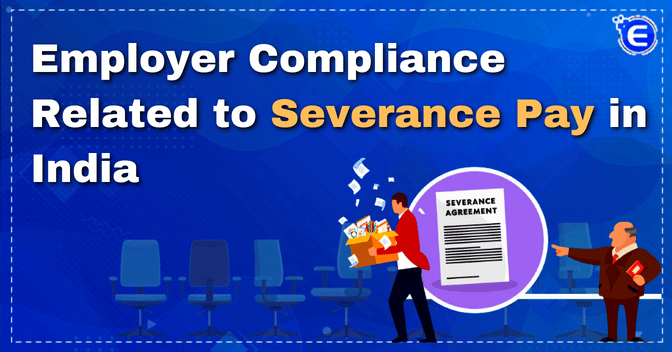 Every employer is mandated to comply with several labour compliance requirements, one of which is with regard to severance pay. It is one of the world’s most widely applied compensation or income support programs. But it is the least understood concept in India, exposing the employers to numerous legal and reputational risks due to unawareness about the prescribed termination provisions of employees and the severance pay entitled by the employees in respect of the same.

The article discusses the Employer Compliance related to Severance Pay in India to help the employer to be aware of the various compliance requirements associated with the same.

What is Severance Pay?

Severance Pay refers to the compensation provided by the employer to the employee in case of termination of their employment by reasons of retrenchment, layoff or mutual agreement.

When does an employee become entitled to Severance Pay in India?

An employee is entitled to severance pay when he becomes “severed”, which occurs in the following circumstances.

The Formula for Calculation of Severance Pay in India

Severance Pay can be calculated using the below-mentioned formula –

What are the Constituents of a Severance Package?

What is the Employer Compliance related to Severance Pay in India?

The Act lays down the provisions of severance pay, stating that the employer is obligated to make the payment for an amount to an employee being in the continuous service of a minimum of five years in the event of termination by his employer.

Section 4 of the Payment of Gratuity Act, 1972[1] prescribes the rate at which the severance pay must be calculated, which is of 15 days salary last drawn by a concerned employee.

This legislation mandates the employer to pay compensation for retrenchment to the employee. Section 25F (b) of the Act states that the employee is entitled to receive severance pay from their employer as per the prescribed calculation formula.

In a landmark judgement the in the landmark judgement of M/S Muller& Phillips Ltd Vs K.C Subs, the Hon’ble Supreme Court of India observed that retrenchment compensation is given with the intention to provide relief from unexpected and sudden elimination of the employment of the workmen/employee.

Apart from the above-mentioned labour laws, the provisions of severance pay are incorporated in various other labour legislations as well, which are discussed below –

Severance Pay in Case of Contract Labourers and Migrant Workers

The contractor and employer of migrant workers are obligated to make the payment of such wages before the expiry of the 2nd day from the date of such termination.

Payment of Gratuity to the Safety Officers

Section 4 of the U.P. Factories (Safety Officers) Rules, 1984, provides that the safety officers of a factory and the officers of the corresponding status are entitled to receive gratuity from their employer.

The section provides the following rules regarding severance pay-

In case any establishment has a unit outside the current state where the workmen are employed, the employer is prohibited from transferring such workmen to another state without obtaining prior consent from the workmen. In the event of closure of the Section and department or department, the employer must discharge the workmen with such benefits as are admissible to them under the law for the time being in force.

The employer must note that if the unit or the section of the department so closed starts functioning again, the workmen, such displaced workmen, would be entitled to return to service in the order of seniority.

When a workman (except for a substitute or a casual workman) having their name on the muster rolls of an industrial establishment or is in continuous service of more than one year under an employer is laid-off, he is entitled to receive compensation for the same by the employer. The compensation amount must be equal to 50% of the total of the basic wages and dearness allowance that would have been payable to him had he not been laid off.

The compensation must be paid for all days he is laid off except the weekly holidays between such periods.

However, the compensation payable to a workman during twelve months should not be for more than forty-five days despite the above provision.

If workmen are laid off for more than forty-five days, continuously or intermittently, during twelve months, the workman would be entitled to compensation at the underlined rate specified above.

Suppose the lay-off period continues for one week or more post expiry of the first forty-five days. In that case, the employer is obligated to pay the workmen compensation for all subsequent days and week(s), except in case of any agreement to the contrary between him and the employer.

There are certain circumstances regarding the retrenchment of a workman and payment of severance, which are highlighted below-

Lalappa Lingappa v. Laxmi Vishnu Textile Mills (All India Reporter 1981 Supreme Court 852). It was held that if the service of the employee is interrupted due to reason of sickness, leave, Lay-off, strike, lockout or cessation of work and not due to any fault of the employee, such absence must not be considered as a break in the continuity of service. Payment of gratuity is not applicable to an employee who has been dismissed from the service due to misconduct. or indiscipline

In the case of  Babu Ram V. Phoenix Mills (1999) (1) (labour law Journal 2 58). The court observed that the petitioner’s service had been terminated by dismissal. Hence it cannot be said that he was in continuous servicefrom the date ofemployment to thedate of superannuation.

The Supreme Court has reiterated if a workman voluntarily abandons his service, it would result in the ceasing of Section 25F of the IDA 194 and its applicability to the employee as he could not be considered to be in “continuous service” at the time of the retrenchment.

“Once the voluntary abandonment on the part of the employee from the service has been established, she couldn’t be considered to be in “continuous service” as u/s S. 2(oo) the I.D. Act, 1947.. The act would cease to apply on her”, the Court stated.

What are the Benefits of Severance Pay?

There are several benefits of severance pay, such as

The unclarity about the concept of severance pay among the employers might be due to the fact that even after being a part of the statutory compliance under the labour legislations for a long time, it gained momentum after the outbreak of the Covid pandemic owing to numerous terminations during the time. Nonetheless, the fact remains that it is quite essential for the employer to be aware of compliance requirements regarding severance pay to avoid any further legal complexities.

Meaning and Concept of Human Resour...

The recent trends in labour laws have led to a drastic shift in the overall perspective of the...

Maintenance of Registers under Diff...

There is a long list of labour compliance required by the employer, including the maintenance o...

ESIC returns is required to half yearly. i.e. for the period of April to September by 12th Nove...