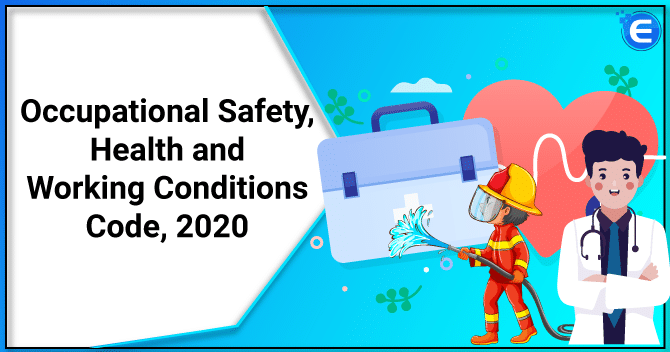 The Occupational Safety Code, 2020 was passed and introduced in the Lok Sabha on 19 September 2020. This code was brought out to change the laws related to occupational, health and safety for workplaces. This code would be applicable to an organisation that has more than ten workers.

Occupational Safety Code checks into the safety and health of workers in a particular establishment.

Which Institutions will this code apply to?

This code will apply to the following institutions:

History of the Occupational Safety, Health and Working Conditions Code

The Occupational Safety Code was initially brought out in 2019. This code was brought out to amend different forms of labour law legislations relating to health and safety in a particular premise.

The Central Government[1] had a clear notion to amend the code and merge more than ten different forms of labour law legislations.

Which labour law legislations were merged due to the Occupational Safety Code?

With a view of merge and amend existing labour laws related to occupation, health and safety the Central Government decided to amend the following:

Hence the primary intention of the occupational safety code was to amend the above laws and make it applicable to all forms of industrial establishments.

The occupational, health and safety code was considered and passed by both houses of the parliament on 22 and 23 September 2020. Followed by this, the Occupational Safety Code received formal assent from the President on 28 September 2020.

Some of the provisions of this code would not be applicable immediately. As per the discussions of the Central Government this code, would be brought out by the government in a phased manner.

Definitions under the Occupational Safety Code, 2020

Under the Code, the Central Government has provided definitions for interpreting the provisions related to the code.

Under the occupational safety code, the meaning of wages will include the following:

What are the Salient Features of the Occupational Safety Code, 2020?

With a view of ease of compliance, the Central Government brought out the code.

The following are the salient features of the code:

This would not apply to any form of institution or establishment which is already registered under any respective central government legislature or respective labour law code.

Apart from this, if there are any forms of material adverse changes in the management or shareholders of the establishment, then such change must be intimated electronically.  The registering officer must carry out these changes within 30 days of the change taking place.

This would apply to the following establishments:

Penalties under the Occupational Safety Code, 2020

Unlike the previous legislations, the Occupational Safety Code 2020 has increased the penalties for non compliance of the provisions of the code. Such penalties if conducted would add some form of deterrence value to the penalty, so that such an offence is not carried out.

The Code on Occupational Health was brought out by the Central Government in September 2020. With a view to amend legislations, this code was brought out to revamp the system related to labour law compliance. This code not only merged different forms of labour legislations, but it improved the standards of overall compliance for establishments and industries. Apart from this, the system of deemed approval has been introduced to counter the effects of delay be government authorities. Hence the above code has overall improved the standards for occupational, safety and health compliance for an organisation.

Read our article:Advantages and Disadvantages of Employee Provident Fund (EPF)

Recently, the Bombay High Court has set away a vital portion of the Central Board of Direct Tax...

Amazon and Flipkart Slammed for Not...

In India, Amazon and Flipkart are the biggest names in the e-commerce sector. Recently, the Ind...