Distinction between NGO and NPO: A Key Analysis 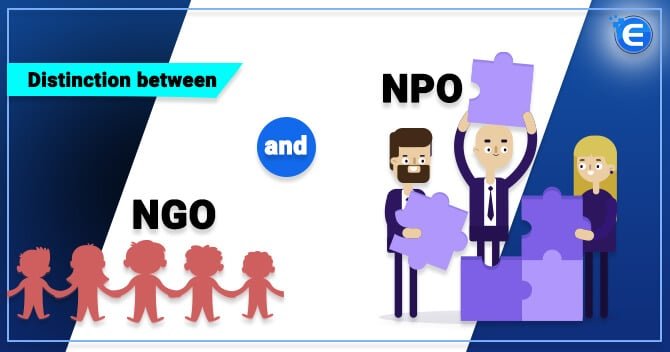 An NGO or non-governmental organisation works for the public, social welfare and animal’s interest. This organisation is not affiliated with any government.

NPO is a non-profit organisation that works for the purpose other than the making of profits, but such organisations are incorporated under the Companies Act, 2013.

The rules, regulations and purpose of establishing an NGO and NPO are different. In this article, we shall cover the basic difference between an NGO and NPO.

What is an NGO?

What is an NPO?

What is the Difference between an NGO and NPO?

The difference between NGO and NPO is explained in detail in the table given below:

Also, Read: What are the Types of NGO Registration in India.

What is the Advantage of Registering as an NGO and NPO in India?

The following are the benefits of registering as an NGO and NPO in India:

NGO and NPO are both similar as well as different. However, they are working towards the greater good of society. In either way, the work they do is critical towards the society and without both types of organisations, many of the causes and efforts we support today would not exist. The only thing to keep in mind while registering an NGO or NPO is the motive of starting the organization. The primary difference lies in small details such as NPOs are exempted from tax, while NGO’s do not allow government representatives to become members of the organization.

See our recommendation: Difference Between Trust, Society and Section 8 Company.

If any individual is thinking to start or run and establish an NGO (Non Governmental Organisati...

Procedure for Registration of Ventu...

The NGO founders can also be its trustee in accordance with the Indian Trusts Act, 1883. Can NG...