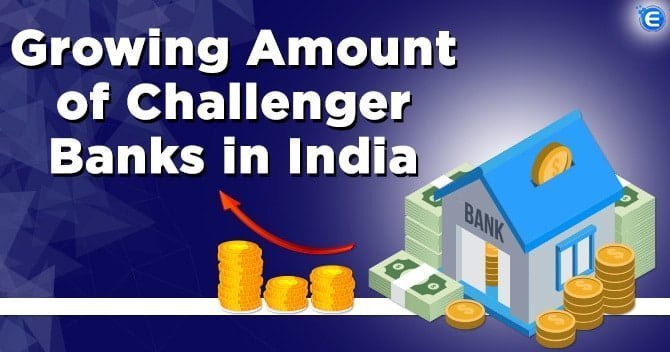 In the recent few years, a number of challenger banks have grown across the world. Not only its number, but the revenue also has grown tremendously. Digitization in Banking has caused a number of people to switch to such banks instead of traditional banks as it has served the areas where traditional banks couldn’t. This article analyses the growth of challenger banks in India.

What are Challenger Banks?

Challenger banks can be explained as small retail banks set up with the intention of competing for business against the larger and long-established national banks. They provide their services through an app or through their websites, thereby helping you to access your bank accounts digitally. These banks allow you to do multiple things without actually having to visit the bank branches.

The Spread of Challenger Banks across the World

Many countries have paved the way for the growth of challenger banks. Singapore’s DBS bank introduced neo banks like Digibank has been a great success since its launch. It has attracted a lot of customers, and millions of transactions are carried out in a single day.

It has caused a significant disruption with people showing massive interest in it because of the benefits attached to it. These banks have made their presence felt in South America to Europe till Asia. Its growth can be attributed to the fact that it provides a lot of benefits and convenience to the customers; that’s why people have shown a great deal of interest in it.

Growth of Challenger Banks in India

In India, payments banks have tremendously shown signs of growth like never before. Payments banks like Airtel, India post, JIO, and Paytm have consistently improved their revenue as the years have gone by.

Innovation is another reason for its continued growth. As they are digital, they provide agility in transactions. Technological transformation is the reason for the revolution of many industries, and the case is the same for banks as well. With the growing use of technology, banks have innovated to satisfy the ever-changing needs of customers. They have realized the need to move beyond the traditional role and shift to the modern way of working. This has facilitated the growth of such banks in India.

According to a report of the PwC, the Asia Pacific region is expected to witness expansion in challenger banks in the future. Stimulated in part by the growth of online or virtual banking, a newer banking model is the need of the hour. It must not only transcend the traditional banking sector but also align with the way the business is done in the future. The main focus of these banks has been to cater to the needs of clients in those areas which have been overlooked by large financial institutions.

Reason for the growth of Challenger Banks in India

The following reasons have been instrumental in the growth of these banks:

Some of the examples of Challenger Banks in India

The list of challenger banks in India includes the following:

It is a full-service digital bank account opened by Kotak Mahindra Bank. It was launched in 2017. It provides a number of benefits and comes in a mobile-based app and doesn’t charge you on non-maintenance of balance and also offers free online money transfers.

InstantPay offers inclusive banking solutions to consumers, Small and Medium Enterprises, and seeks to provide financial services to the larger India. As per the company, its objective is to promote financial inclusion in the country in a responsible and sustainable way.

Airtel payments bank is the first payments bank that was opened for business in India. It is a subsidiary of the telecom giant Airtel. The bank seeks to develop a nationwide merchant ecosystem of more than 5 million partners, including small Kirana stores, grocers, pharmacies, etc.

Jio payments bank is a joint venture between Reliance Industries and the State bank of India. It was launched in the year 2018. The bank provides a number of services like ATM cards, debit cards, online and mobile banking, etc.

Paytm payments bank was launched in 2017 by Paytm, an e-commerce payment system. This bank is partly owned by Paytm’s founder Vijay Sharma and One97 Communications. The bank intended to target 200 million accounts at its launch and mobile wallets within one year.

Advancement of technology combined with digitization in the banking sector has facilitated the rise of challenger banks in India. However, the challenge that these challenger banks could face is the fee attached to the online service. Although some of them offer its services free of cost but with an increase in customer demands, we may see a change in this trend.

Digital Currency in the Banking Ind...

There has been a significant rise in digital currencies which can potentially impact the financ...