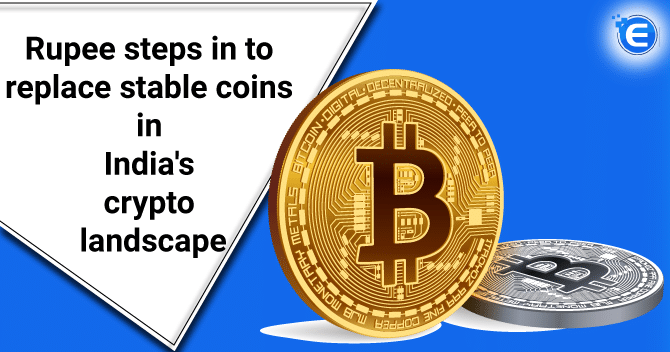 When the Reserve Bank of India banned banks of India from processing payments related to cryptocurrency two years ago, investors came up with a great idea. Stable coins were used to process transactions. These cryptocurrencies are designed to represent units of fiat currencies, most often the US dollar. After the revival of trading on crypto exchanges, the Indian rupee has come back to retain its position.

What are stable coins?

These coins are a new class of cryptocurrencies. It is designed to minimize exchange rate volatility. Often the exchange rate of this cryptocurrency is controlled by linking the price of it to fiat currencies like the US dollar. These were used to process transactions. Investors could put their money in them and convert it into cryptos such as bitcoin.

How stable coins helped in solving the problem?

These coins solved a crucial part of the crypto-transaction issue. The ban by the Reserve Bank had pushed the industry from exchange administered transactions to peer to peer trading. Exchanges were not able to accept rupees, and they had to be transferred directly between counterparties.

However, transferring rupee to counterparties via National Electronic Funds Transfer[1] (NEFT) or Real Time Gross Settlement (RTGS) was time-consuming, and the price of crypto would often change before the money came, incentivizing one of the parties to renege on trade.

The industry then responded by using stable coin. These were currency tokens issued by the private companies against actual hard currency reserves. USD tether came out as the most famous such coin, tied to the US dollar.

India’s largest crypto exchange Wazir X CEO, Nischal Shetty, said that some of these coins like the USDC are issued by companies regulated in the United States. Their books are audited, and therefore there is a reasonable degree of safety that they have hard currency backing the stable coin. It happened in India as well. The co-founder of Chennai based Giottus, a cryptocurrency exchange, Arun Vijay, said that in India, the use of these coins increased after the Reserve Bank payments ban as exchanges could not accept rupees. For their peer to peer customers, stable coin provided the solution of holding cash in the exchange without requiring the need to withdraw to the bank account all the time.

However, the credibility of stable coin like tether has always been a matter of controversy. The issuer of coins may not actually hold fiat currencies against the tether or may not keep it in sufficient quantities. An article in Forbes in March 2019 noted that some of the tether’s reserves are in loans instead of being in pure reserves, making it an unregulated fractional reserve bank.

The great comeback of Rupee

Rupee payments made a comeback after the Supreme Court quashed the RBI payments ban in the month of March 2020. The co-founder of Coin DCX, a cryptocurrency exchange, Neeraj Khandelwal, stated that the Indian market was 200-300 million dollars per day in 2017. When the RBI banned it, that dropped to close to 5 million dollars, most of it in stable coin, i.e., around 90%. After the judgment by the Supreme Court, the volume of stable coin has remained at about 5 million dollars, but now rupee crypto contributes an almost equal amount.

The switch back to rupee is taking place alongside a formalization of a previously largely underground market.

The decision by the Supreme Court on the RBI payments ban has brought the market above ground and has made it more accessible. However, cryptocurrencies still are volatile and speculative asset that is not recommended for retail investors.

The Digital Reinvention in Retail B...

The way banking is conducted these days has gone through a sea of change, and also, the fact wh...