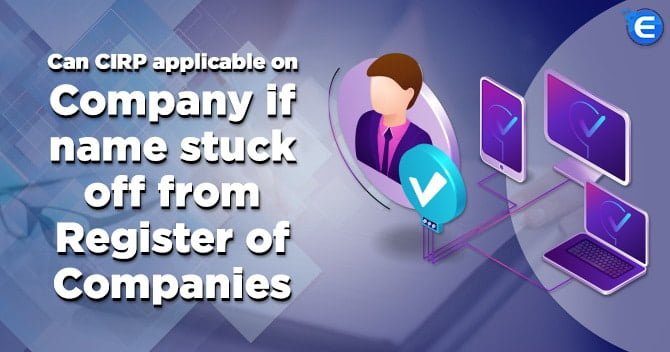 The (NCLAT) National Company Law Appellate Tribunal can initiate the (CIRP) that is Corporate Insolvency Resolution Process under section 7 and section 9 of the Insolvency and Bankruptcy Code, 2016. The CIRP can be maintained also against a Corporate Debtor in case if the Company’s name has been struck off by the (ROC) Registrar of Companies from the companies register.

Whether CIRP can be initiated against the struck off company?

The NCLAT has held that in terms of Section 248 (5) of the Companies Act 2013, the Adjudicating Authority that is NCLT has been empowered to restore the Company’s name. The Company can regain its position and the officers of the Company can also resume their position, for the purpose of initiation of CIRP insolvency proceeding under section 7 and section 9. However, such an application needs to be filed within the period of twenty years from the date of the removal of a Company’s name in the Register.

The Section 250 of Companies Act, 2013 states that when a company gets dissolved under section 248, it will also cease to operate as a company from the date specified in the notice under sub-section (5) of the section 248. The (COI) Certificate of Incorporation issued to it will deemed to have been cancelled from that particular date only except for the purpose of realizing the amount which is due to the company or other payments or obligations of the company or discharge of the liabilities.

This gets more cleared from the case, of Elektrans Shipping Pvt. Ltd. vs Pierre D’Silva in this Appellate bench of NCLAT Delhi, has allowed initiating the CIRP on application made by the operational creditor. It was a noted the name of a company was struck off by the (ROC) Registrar of companies from the register. This case was first of its kind which became a precedent and it served as a solution that CIRP can also be brought against the company whose name is not present in the register.

Section 248(7) of the Companies Act clearly provides that, even after the removal of the company’s name from the Register, the existing liability of each company’s ex-management requires to be continued. Keeping this in mind the NCLAT observed that the insolvency process still can be initiated knowing to the fact that liability of a Company prevails and its management remains alive despite being struck off by the ROC. Hence, the National Company Law Appellate Tribunal has held that an application to initiate CIRP under Sections 7 and section 9 of the IBC 2016 will be maintainable and not affected by the removal of name from the register.

Analysis of The Case

The judgment in the above case was being pronounced by a three-member Bench of with Chairperson, Justice SJ Mukhopadhaya, Justice AIS Cheema and Member Kanthi Narahari in an appeal from the National Company Law Tribunal.

One Pierre D’silva (the applicant) has filed an application under the Section 9 IBC 2016 against M/s. Elektrans Shipping Private Limited who was a Corporate Debtor. The application was being admitted by the Adjudicating Authority which was NCLT, Mumbai. A Corporate Debtor has further moved to the NCLAT in appeal, challenging the order of admission as passed by NCLT.

It was pleaded that the Appellant’s case under the Section 9 application is not maintainable in the name of a Corporate Debtor because the name of company was struck off from the Registrar of Companies in September 2018 with the exercise of powers as conferred under Section 248 of the Companies Act. It was argued that the NCLT has made error in admitting an application without considering the real status of a ‘Corporate Debtor’ as on the date of admission. For deciding the issue, the NCLAT adverted to the Sections 248, 250, 252 of the Companies Act 2013 along with Section 60 of the Insolvency Bankcrupkcy Code 2016.

It has been further observed that as per Section 248(6), before passing the removal order from the Register of Companies, the Registrar must satisfy himself that sufficient provision has been made for realization of all due amounts to a company and for the payment or discharge of its liabilities or the obligations within a reasonable period of time.

It was further concluded that as per proviso to Section 248(6), the assets of the Company has to be made available for payment and discharge of its liabilities as well as obligations even after the date of an order passed for removing the name of a Company from the Register of Companies. Additionally therefore, it has been recorded that Section 248(7) provides for the continuous existence and enforcement of liability of every director and manager or any other officers in the management and its member under such situation when company name is removed.

Lastly concluded, that the NCLAT asserted that Section 248(8) also clarifies that the removal of a Company name from the Register will in no manner affects the power of the NCLT in case its requires CIRP for winding up the company . It then can relied upon the provisions of Section 250 of the Companies Act 2013 to state that after a removal, the right of realization of all due amount to a Company for purpose of the payment or discharge of its liabilities as well as obligations of a Company can be continued. It has been also relied upon Section 2(94A) of the Companies Act, 2013 that deals with the definition of “winding up” which states that a Company, whose name has been removed from the Register of the Companies can also be liquidated under the IBC 2016.

Explaining the provisions of an appeal against removal and the subsequent powers which are granted to NCLT, the NCLAT also stated that Company or any of its members or creditors or workmen may move an application under the Section 252(3) before NCLT. The condition is it must be applied before the expiry period of twenty years from the date of publication in the Gazette of the notice under Section 248, sub-section (5) from the removal of name.

After being satisfied, the NCLT passed an order for restoration of  name of the Company in the Register. Here, the NCLT plays the role of the ‘Adjudicating Authority’ and on the other side, it also acts as ‘Tribunal’ under the Companies Act. It can be viewed, that if an application is filed by the creditor before the expiry period of twenty years from the publication of the Notice under, it would be open to an Adjudicating Authority to further give directions for restoration of name of the Company. Also that the assets of the Corporate Debtor will continue even after its name is struck-off. The NCLAT observed that the assets of the Corporate Debtor are not could be looked into only by the Resolution Professional.

Note : The Appellate Tribunal has nonetheless has also clarified that such order of restoration cannot be in case of Voluntary Liquidation process of Corporate Persons under the Section 59 of IBC.

It is concluded that such a decision of the NCLAT in terms of ruling in favor of the CIRP insolvency proceedings even in case the company name is struck off shows that how the legislature, as well as the judicial bodies, are taking all necessary steps in order to get the true intent of the Insolvency and Bankruptcy Code to be implemented.