Use of BlockChain in Insurance Sector: Benefits and Challenges 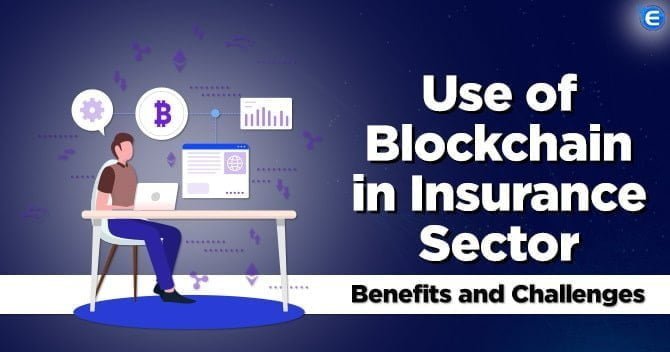 The advent of technology has rapidly caused a transformation in various industries. One of them is the insurance industry. Technology has played a crucial role in its growth, and there is one technology that is proving to be more essential than any other i.e., blockchain. This article covers the use of Blockchain in Insurance.

Blockchain is the way of storing data safely. It is also called distributed ledger technology. It is a cryptographically secured form of shared record-keeping. It not only lets you keep the data safe but also keeps it hidden from everyone except for people who have permission to see it. It is nearly impossible to change, hack, or cheat the system.

What is the benefit of using blockchain in Insurance sector?

In the insurance sector, the database is vital. The Blockchain is not the substitute to it, but it is the internet-based smart database that is safer and secure in comparison to what we have today.

The Blockchain feature offers a number of benefits to the Insurance sector. These are as follows:

Short term gain of efficiency is one of the most immediate demonstrations of blockchain promise in the insurance sector. It simplifies the processes as well.

Blockchain provenance mitigates chances of fraud, and it manages to bring trust to computer networks by altogether removing the human need for it. It plays a pivotal role in risk mitigation.

The insurance sector may have some hidden elements attached to it, and it may not be clear what processes are carried on behind the scenes. Blockchain transactions generate an auditable data trail that allows anyone to look up a process and also find out the reason for it.

The decentralized nature of blockchain makes it difficult for penetration from any malicious attack.

In insurance, blockchain helps in reduction in turnaround time for claim payouts.

State of Blockchain in Insurance

The state of blockchain in the insurance sector can be compared with its state in other industries. It is underdeveloped and is in its initial stage, but many experts believe that it has the ability to change the dynamics of the way work is done.

The blockchain is in its Research and Development stage right now in the insurance. Those who may have noticed the emerging technological trends in their industry have learned its potential impact on insurance. Its transformative potential could be so evident in the future that many organizations are working hard to know the best applications for it.

What is the need for blockchain in insurance?

Adoption of blockchain can be considered by the insurance industry owing to the following factors:

The major challenge faced by the insurance industry is false claims, detection of fraud, and time is taken to validate each application. In this case, blockchain can be the solution. It may serve as a distributed register which contains both internal as well as external customer data. Once the system is in place, and when the information is entered digitally, the platform will validate the documents automatically. It will lead to speeding up the entire process and also reduce human intervention, thereby reducing the chances of error.

Another challenge faced by the industry is the security of data. There is a possibility of leakage of data to a third party in any industry, be it banking, insurance, or healthcare. We have heard about instances of data hacking. Blockchain can provide a solution for it. In the current system, the data is present at a central location, which is not the case in blockchain, thus making it safe and secure. Moreover, the information here is encrypted, thereby maintaining anonymity.

According to the report of PwC, blockchain owing to more efficient data processing and reduction in fraud can remove 15 to 25% of expenses incurred during the process of insurance, thereby saving around 5 to 10 billion US Dollars.

Challenges associated with the adoption of blockchain in insurance sector

There are some challenges faced in the adoption of blockchain in insurance. These include:

The insurance business involves a number of stakeholders who may have different thought processes concerning the use of this technology i.e., blockchain.

Regulations are vital as they protect and maintain customer’s trustworthy transactions. However, too many stringent regulations may deter it from being used up to its full potential considering the insurance industry is one of the hardest regulated industries.

Blockchain technology is somewhat linked to the talk of cryptocurrency bitcoin and enabling anonymous transactions on the dark web. There must be a lot of solid evidence concerning its positive impact in order to increase its adoption.

Considering the growth in technology, the rise of blockchain in Insurance is inevitable. Blockchain technology is a unique breed of development that has enough transformative potential to cause a new standard for industries that have been resistant to change. The insurance industry is expected to gather momentum around blockchain rather quickly. It may be expected that blockchain shall add powerful efficiencies to insurance companies accepting the technology.

Also, read: How Blockchain Technology will Revolutionize Finance and Auditing?

Insurtech Collaboration: Key to the...

In the recent past, Insurance companies have seized the opportunity from Insurtech disruptors....

How Does Artificial Intelligence he...

Artificial intelligence (AI) in the insurance industry has become the new normal these days. Al...

The Covid-19 pandemic has jolted many industries, and its adverse affects may continue for a si...