An Overall Concept of Input Service Distributor (ISD) under GST 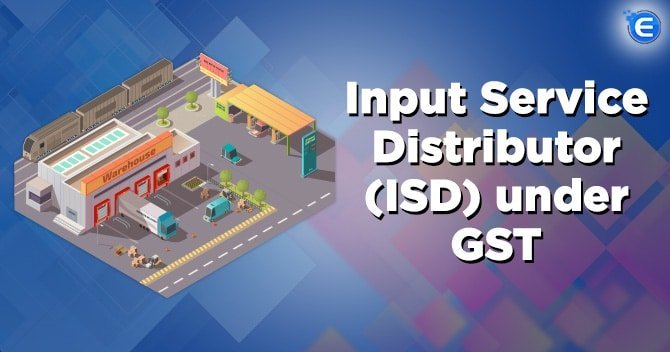 The theory of Input Service Distributor (ISD) is in existence since the Service Tax Regime. According to the CENVAT credit rules 2004, Input Service Distributor means the manufacturer’s office or of the producer or provider of output service, which receives the invoices issued towards the purchase of the input services. The idea of input service distributor under GST has its base on the service tax regime. Therefore, it is proposed to take a look at how a manufacturing unit’s head office and its branch units function to understand the idea of Input Service Distributor. Typically, the head office of an organisation obtains services that are general for all the company’s units located across the country. As a result, the supplier of the services issues an invoice in the name of the head office of the company. The invoice is issued in the name of the company’s headquarters because the headquarters raise the purchase orders.

What is an Input Service Distributor (ISD) under GST?

As prescribed in section 2 (61) of the Central Goods and Services Tax Act, 2017, an Input Service Distributor has the following characteristics:

The CGST Rules, 2017 also prescribes the procedural situations to be observed by the input service distributor (ISD) under GST. The manner and even the quantum of input tax credit (ITC) to be distributed by Input Service Distributor to the eligible beneficiaries, the invoice that must be issued. Return that must be filed by the input service distributor and how to deal with the input tax credit on the credit and debit notes issued to the office.

What are the conditions to be complied by an Input Service Distributor (ISD) under GST?

The conditions to be fulfilled by an input service distributor (ISD) under GST are as follows:

The significant points to be included in the Invoices by Input Service Distributor (ISD) under GST for the purpose of ISD invoice and ISD credit note are as follows:

Note: There is an exception as to who does not need to number the document serially.

An ISD distributes input tax credit or ITC in the same month in which it is made available to the central office. Hence, the details of ITC distribution are filed in form GSTR – 6.

The office, as an input service distributor, needs to issue an invoice to distribute the tax credit. Such a tax invoice must include the following details:

ITC is to be Given Only to Specific Recipient

The credit for paid taxes on input services applies to a specific recipient of credit. It shall be distributed to that recipient only.

Distribution of ITC in case of more than one Recipient

In this type of cases, credit must be distributed on a pro-rata basis.ITC on input services is available to the entire recipient who has utilised the common services.

ITC needs to be distributed among the recipients on a pro-rata basis in case ITC is available to more than one recipient. The basic of pro-rata calculation is based on a ratio. This ratio is the ratio between the following components:

The term turnover includes the sale of goods that are not taxable as per the CGST Act, 2017, in order to calculate turnover. However, the goods covered under entry 84 of List I and also Entry 51 and 54 shall be excluded.

What is the Meaning of Relevant Period?

The term “relevant period” is defined as follows:

The formula for Calculation of Input Tax Credit

The formula for calculating the input tax credit that needs to be distributed is as follows:

The above-shown formula applies to all the taxes under GST. That is Central Tax, State-Tax, UT Tax, and Integrated Tax.

The ISD needs to be distributed ITC in the following manner:

There are situations when the supplier of goods or services issues a debit note or a credit note after making a supply and issuing a tax invoice.

A credit note is a general document issued by the supplier of goods or services, after making a supply and by issuing a tax invoice, to a recipient. It is issued when:

A debit note as a document is issued by the supplier of goods or services, after making a supply and issuing of a tax invoice. This is issued when the taxable amount or the amount of tax levied in the tax invoice issued is less than the taxable value or tax payable with respect to such supply of goods.

The ITC distributes to the unit branches against the original invoice and gets it reduced whenever the supplier issues a credit note to a service distributor. It is issued because of the goods that are returned by the recipient or on account of the excess taxable value on the supply made. Further, the ITC amounts get reduced as per the original invoice to the branch units. It is reduced in the ratio in which the ITC was distributed to them originally.

Hence, an ISD issues an “ISD credit note” to the branch units to reduce ITC proportionately. In the same month, this document is issued in which the credit note approved to ISD is included in GSTR-6 return. Hence, this amount is added to the output tax liability of the recipient. When the ITC apportioned is less than the adjusted amount, this is done.

However, in some cases, the amount distributed is added to the recipient’s output tax liability. This is done in cases where the allotted amount is negative.

Now, the same process will be followed where the ITC amount is distributed by an ISD, which is reduced later on for any of its recipients.

Distribution of ITC to a Wrong Recipient

Further, there are cases when the credit is distributed to a wrong entity. This can be corrected by issuing an ISD credit note to the recipient to whom ITC was distributed wrongly. Also, the ISD invoice for that amount is issued to the recipient, who is genuinely entitled to such credit. Thus, both the documents must be shown in GSTR-6 of the ISD in the similar month.

Section 21 of Act provides deals with a case where ISD distributes credit in breach of the provisions mentioned in section 20. In this act excess distribution of credit to one or more recipients of the credit is shown.

The excess credit distributed shall be recovered from the recipients along with interest.

Filing of Return by Input Service Distributor (ISD) under GST

How will Enterslice Help You?

Enterslice intends to provide the following services to an input service Distributor.

Hence the concept of input service distributor (ISD) under GST is a facility which is made available to businesses having a large share of ordinary expenditure and billing or payment is done from a centralized location. This mechanism is meant to make things more relaxed regarding the credit taking process for entities, and the facility is intended to toughen the seamless flow of credit under GST.

Read, Also: Changes in Utilization of Input Tax Credit under the GST Act.

In this blog, we will cover all the relevant provisions relating to aggregate turnover  Goods...