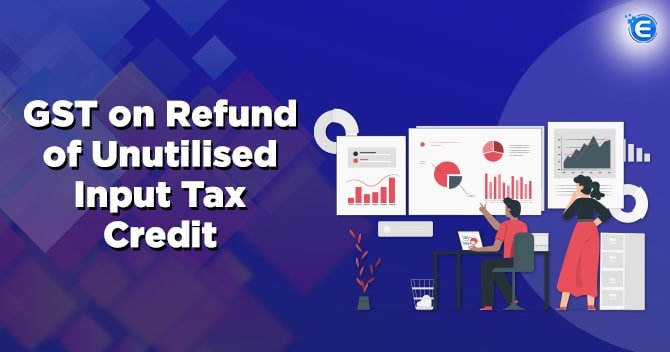 The input Tax credit is accumulated when the tax paid on inputs is more than the actual tax liability. The accumulation process is generally carried over to the next financial year, till the registered person can utilise, this unutilised input tax credited for payment of output tax liability.

As prescribed in Section 54(3) of the Central Goods and Service Tax Act (CGST), 2017, a registered individual can claim refund of unutilised input tax credit during the end of any tax period.

For this tax period has been defined as the time span for which the return needs to be furnished. Hence, a taxpayer can claim refund of unutilised input credit on monthly basis.

What is Input Tax Credit in GST?

Input Tax Credit also referred as ITC is the tax where a business pays while purchasing goods or supplies, and it can be used to reduce the tax liability when it makes a sale. In other words, businesses can reduce their output tax liability by claiming credit to the amount of GST paid on purchases for the entity. Goods and Services Tax (GST) is an incorporated tax system where every purchase by a business must be matched with a sale by another business.

The term ‘Input’ clearly specifies that any goods other than capital goods used or intended to be used in the business. The taxes paid on the internal supply of inputs, services and capital are called input taxes. These include an integrated GST, State GST or Central GST.

Where is Refund of Input Tax Credit Allowed in GST?

Refund of unutilised input tax credit is permitted in the following two cases:

Zero Rated Supplies Made without Payment of Tax

By Zero rating it can be clearly understood that the entire supply chain of a particular zero-rated supply is tax-free which means that the burden of tax does not levy either on the input tax side or on the output tax side.

The basic nature of zero rating is to bring the Indian goods and services at par in the competitive international market by ensuring that taxes do not get added to the cost of exports.

According to section 16(3) of the Integrated Goods and Service Tax (IGST) Act, 2017-a registered person under GST who makes zero rated supply can claim refund under either of the options mentioned below:

In case of credit accumulation here, if the rate of tax charged on inputs is higher than the rate of tax levied on output supplies (except nil rated or fully exempted supplies). Exception is made on the supplies of goods and services as per the recommendations of the GST council or notification made by the Government.

Some exemptions are made where the unutilised input tax credit is not refunded:

What is the Time Period for claiming Refund in Input Tax Credit?

The application for refund must be made before the expiry of two years from the relevant date.

Also, Read: How to Calculate GST Payments and Refunds in India.

What are the Exceptions where No Refund of Unutilised Input Tax Credit is Made?

Unutilised tax credit will not be refunded in the following circumstances:

What are the Documentary Evidence Needed for Refund of Unutilised Input Tax Credit?

As per Section 54 of the Act, if the amount claimed is less than Rs. 2 lakh no documentary evidence needs to be filed. Only a declaration made by the applicant based on the documents available is sufficient.

The application for refund must be attached with:

According to S. 54(6) of the CGST Act, where the refund claim on account of zero rated supply of goods or services or both is made by the registered persons, other than the category of registered persons as notified by the Government on the recommendations of the GST council, refund will be made on provisional basis on 90% of the total amount claimed excluding the amount of the input tax credit provisionally accepted.

Here the final order will be issued within a span of sixty days after receiving the completely filled application.

As per Rule 91 under the CGST Rules, 2017 -the provisional refund must be granted within 7 days from the date of acknowledgement of the tax refund claim.

The rules also specifies that the provisional refund shall not be granted in case the person claiming a refund has not been prosecuted for any offence under the act or in the previous law and the amount of evaded tax must have exceeded Rs. 2, 50,000.

How to Calculate the Refund Amount of the Unutilised Input Tax Credit?

The formula to grant refund on account of zero rated supply is based on the following:

According to Rule 89(3) of CGST Rules, 2017 –the credit ledger (electronic) shall be debited by an amount equal to the refund amount claimed by the applicant.

As prescribed in Rule 94 of CGST Rules– Interest is to be paid for any delay in made in sanctioning of refund beyond the given period of 60 days. The refund or interest or both will be sanctioned directly to the bank account of the applicant.

Cases Where Refund Amount is Not Credited to Consumer Welfare Fund

According to section 54(5) of the CGST Act, the amount of refund which is due to an applicant is credited to Consumer Welfare Fund by default. Such an amount is credited only when the authorised proper officer gets satisfied that the whole or a part of refund claimed is refundable. The case where the refund is not credited to Consumer Welfare Fund by default is mentioned below:

What is the Process of Filing Refund of Unutilised Input Tax Credit?

The application to claim the refund of unutilised input tax credit is to be made using the GST portal. The process is explained below:

Step 1: In the GST Portal login into your account.

Step 2: Move to Services, then Refunds and then click on Application for Refund.

Step 3: Choose the option Refund of ITC on Export of Goods & Services without Payment of Integrated Tax or on account of supplies made to SEZ unit/SEZ developer (without payment of tax).

Step 4: Select and put the relevant financial year month for which the refund is to be generated and then click on Create. Refund application can be made only when a proper GST return is filed for that relevant period.

Step 5: Enter the details related to the Export of goods and/or services as required under Statement 3. The offline utility is also provided by the department or JSON file can be generated by the software.

Step 6: The relevant amount must be entered in the boxes provided.

Step 7: The maximum refund amount will be automatically calculated on the basis of figures entered in the boxes.

Step 8: The breakup for refund requested under Integrated Tax, Central Tax, State or Union Territory Tax and Cess must be entered below.

Step 9: Click on Proceed button and submit the application using DSC or EVC.

The GST Law provides many options to the zero rated suppliers for claiming refund of taxes on the input side. One of the options provided is making of export under bond or Letter of undertaking and then claim refund of unutilised ITC. The law also mentions about refund of unutilised ITC where credit accumulation is on made on account of inverted duty structure. Some timelines are set for processing of refund claims where the claims are not settled within 60 days, an interest will be paid with an interest of 6%. Furthermore, 90% of the refund claim is to be paid within seven days of receipt of acknowledgment of claim on a provisional basis. Claim for refunds are filed with minimum documents and the refund amount is credited to the claimant’s bank account directly. This process can be done online and without any hassle with minimum interference with the tax authorities.

See Our Recommendation: What are the types of GST Return & due dates filing.

What is ITC Rules for Capital Goods...

Input tax has been proved to be the most significant feature in the era of GST. It has changed...

In this blog, we will discuss two different concepts: Composite supply and Mixed supply. Many p...