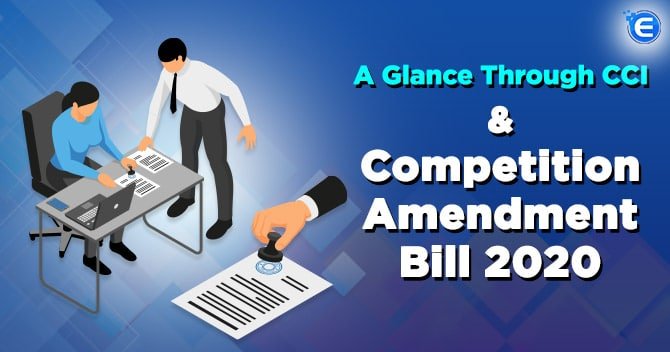 The competition commission has the following objectives-

After the (CLRC) Competition Law Review Committee examined the Act, the CLRC submitted its report to the MCA on august 2019. In its report, the CLRC gave various suggestions for amendments to the provisions of the Act. The MCA, after reviewing the recommendations of the CLRC, prepared the draft. The bill was published publically on 20th February 2020 for public comments. A close look on the Competition Amendment Bill indicates that the bill intends to provide clarity over some of the provisions of the Act and it seeks to ensure transparency and proposes to make the system more efficient.

Let’s briefly take a look at the changes proposed in the Competition Amendment Bill 2020:

In order to make CCI more efficient to tackle modern issues, the CLRC suggested change in the regulatory structure.

The bill seeks to constitute a governing board headed by the chairperson of CCI and other six whole-time members from CCI. The governing board shall also comprise of the secretary of MCA and his nominee, secretary of DEA Department of Economic Affairs and four other members nominated by the central government. The governing body shall make regulations, come up with measures to increase awareness and set up a National Competition Policy. The governing board shall be responsible for the direction and management of the affairs of CCI. The Competition amendment bill allows for the formation of panels comprising of three members. However, the bill doesn’t mention the procedure of nomination of the members of the governing board. The selection committee entrusted with making recommendations for the position of the chairperson and other members shall not make such recommendations for the part-time members.

The bill proposes the CCI to issue penalty guidelines. The penalty guidance may give recognition to the turnover principles and shall specify the process of determination of the percentage of the penalty and the application of mitigating and aggravating factors. The CCI has the authority to enforce prohibitive penalties. The bill doesn’t impose a mandatory limit in which the guidelines will be imposed yet the guidance might cause clarity.

In a measure to ensure transparency and an element of democratic rulemaking, the competition amendment bill requires the governing board to seek public comments on regulations. An exception to this rule includes regulations concerning the internal working of the CCI and urgency in public interests.

The Competition Amendment Bill proposes an overhaul of the procedure of regulation of combinations. These include curtailing time limit to 150 days instead of 210 days for deemed approval.

CCI has been conducting inquiries into combinations despite a lot of stark flaws in the existing inquiry procedure. The bill, however, intends to correct these flaws by giving statutory sanctity to the procedures by the CCI. It will ensure fewer chances of appeals against combination orders.

The bill provides statutory recognition to the green channel process of the CCI by ensuring that the central government can specify a deemed process of approval for transactions that are not exempted from notification to CCI. This provision will help the CCI to validate non-contentious transactions.

The Competition Amendment Bill authorises the CCI and the central government to specify new thresholds for merger notification. It can be notified in the public interest. The new thresholds will allow the CCI to make sector-specific thresholds either based on deal value or any other criteria. This amendment could be due to CLRC’s suggestion to capture transactions in the digital market. The application of this authority requires caution because of the vigorous nature of the digital markets. It may also impact the ease of doing business and might result in increased cost for businesses. It is more necessary to have a detailed economic and legal analysis of the value, basis and necessity of such thresholds.

The bill, according to the recommendations of the CLRC, proposes to expand protection to the owners of the intellectual property rights. It would bring equality in the treatment of abuse of dominant position and anti-competitive agreements. The Intellectual Property Rights holders are presently exempted only for anti-competitive agreements. The bill will widen the scope of protection of IPR holders.

In a highly crucial move, the bill proposes initiation of provisions that allows an investigated party to voluntarily undertake commitments or offer a settlement with respect to an anti-competitive agreement or abuse of dominant position. The bill envisages the following with regard to settlements and commitments:

As a matter of fact, this amendment in the settlement and commitment process shall permit quicker disposal of cases, thereby both CCI and the investigated party can avoid the unnecessary long procedure of investigations. However, there is not enough clarity on the question whether the proposed settlements and commitments shall have a retrospective effect, i.e., application to existing cases and whether the right to claim compensation exists in case of settlements.

The bill promises to be a positive step towards development. It fills certain gaps in the statue. The CCI is important machinery, and for the proper working of this institution, there must be no half measures. It appears that the drafts amendments if implemented, shall benefit the consumers and may help the CCI to perform better. The Competition Amendment Bill provides for a new and strong system of settlements and commitment, which is seen as a welcome move. However, the bill leaves the stakeholders desiring for more as they feel that the bill doesn’t provide with clarity on the procedure of inquiry or that it should have contained a provision for a separate bench for the National Companies Law Tribunal.

The MCA or Ministry of Corporate Affairs received several requests concerning the filing of doc...

The Central Government informed the Supreme Court that the moratorium period for repayment of l...

The term “Churn and Burn” has been used to describe the activity of brokers trading on clie...