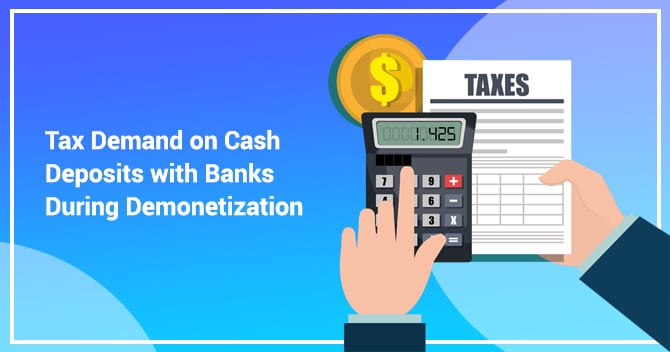 The Central Government had scrapped high-value currency notes of Rs. 500 and Rs. 1,000 denomination on 8th November 2016 and urged people to deposit these notes in their respective banks by 31st December that year, after which they were rendered as void. The step was mainly aimed at checking black money and the people had no recourse left, but to unhide all their black savings. Thereafter, the income tax department started the process of cross-checking and evaluating the fairness of high-value deposits with the income tax returns filed by individuals. Indeed, the high-value cash deposits made by a few jewellers during the demonetization period were carefully scrutinized by the tax department officials. The suspected cases of fraudulent cash deposits during demonetization were asked to explain the source behind such deposits.

A standard operating procedure as prescribed by the Finance Ministry was followed by the Assessing Officers while investigating the cases of unusual cash transactions and malpractices noticed during the demonetization period.

The income tax department has sent demand notices to lakhs of taxpayers asking them to give an explanation for the sources of income behind cash deposits during demonetization and has even started prosecution in some cases. On the receipt of such tax notices, the taxpayers have been juggling with finding out ways to give answers to the tax officials so as to escape tax payment.

Scrutiny by IT Department of Cash deposits during demonetization

After the Indian Government invalidated high-value currency notes in 2016, many jewellers have been detected by the tax authorities to have made hefty cash deposits during that tenure and for which they failed to offer a justification.

The income tax returns for the Financial Year 2016-17 and Assessment Year 2017-18 were selected for scrutiny by the tax officials via e-proceedings for all those assessees, who had made cash deposits during demonetization amounting to more than Rs. 2.5 lakh. Such scrutiny cases have resulted in huge tax demands according to the orders passed by Assessing Officers. For determining the level of cash transactions during demonetization period and examining deposits made with banks, the department directed the concerned assessees to furnish cash books, sales books, ledger accounts of creditors from whom the cash was received, purchases books, cash accruals throughout the year, cash accruals during the demonetization period, cash transactions for the same period for the immediately preceding financial year, etc.

The application of data analytics by the department revealed that extraordinarily huge deposits were made by a few jewellers during the immediate period after demonetization, in comparison to their cash deposits of earlier years. Moreover, such high-value bank deposits did not reconcile with the income disclosed by such jewellers in their tax returns.

Common explanations provided by assessees and Lack of authentic documentation

The tax officers are reporting that the income tax department has been taking stringent measures to levy taxes on sales of previously undisclosed stock. Post the government announcement on Nov 8, 2016 to the effect that Rs. 500 and Rs. 1,000 currency notes shall cease to exist as legal tender, many jewellers with an annual income of merely a few lakhs were reported to have deposited crores of cash in huge multiples after a few days of such announcement.

Amid the income tax assessment proceedings against several cases of undisclosed cash deposits made during the demonetization period, a large number of taxpayers (the majority being jewellers) are facing tax demands of significant value from the department. This is pursuant to their inability to provide valid and legitimate grounds of such high-value undisclosed cash deposits during demonetization. Further, such exorbitant deposits failed to go in tune with the volume of their normal course of business. Also, to hide such unreasonable profits in their books, they undertook an array of illegitimate means.

In cases where it is found that black money was involved behind the generation of massive cash revenue by jewellers at the time of demonetization, steps of tax demand are initiated by the income tax authorities. There were many instances where jewellers accepted black money of customers in lieu of selling gold commodities to them at exceptionally high premiums. With a view to meet a sudden huge demand for gold at that time and to earn unreasonably high-profit margins in comparison to those of routine times, the jewellers were suspected to have sold their products for an unlawful consideration, i.e., a consideration backed by black money.

To cover up the recording of these huge deposits in books, the practice adopted by assessees was to show them as sale proceeds or loans taken or advances received from anonymous customers in lieu of purchases effected a month before demonetization. The unaccounted cash transactions were given the name of proceeds from sales of gold or silver made on credit to certain fake and unregistered dealers. However, on scrutiny conducted by the tax departments, the assessees failed to produce complete invoices of such purchases.

Many jewellers are also suspected by the department to have accepted the annulled notes much after Nov. 8 and to backdate the purchase receipts or invoices. This was done so as to falsely portray that the purchases of gold or silver by customers were effected at the time when the bills were still legal tender.

Moreover, it cannot be denied that the taxpayers hold an option to file an appeal against the orders of tax demands. But apparently, their probability of winning shall directly depend upon the strength and genuineness of each case, along with the supporting documentation furnished by the taxpayers.

Levy of tax and penalty

The tax authorities may exercise the right to scrutinize the past income of an assessee and make additions to assessable income. This can be done by virtue of Section 68 and 69A of the Income Tax Act.

Section 68 (Cash Credits) states that “where any sum is found credited in the books maintained by an assessee for any previous year, and the assessee fails to offer an explanation about nature and source thereof or the explanation provided by him is not satisfactory in the opinion of the Assessing Officer, then such sum can be charged to tax as the income of the previous year”.

Moreover, Section 69A (Unexplained money, etc.) states that “where an assessee is found to be the owner of any money, bullion, jewellery or other valuable article in any financial year and such article, money, etc. is not recorded in the books maintained, if any; and the assessee fails to offer an explanation about the nature and source of procurement of such money, article, etc. or the explanation provided by him is not satisfactory in the opinion of the Assessing Officer, then such sum may be deemed to be the income of the assessee for that financial year

Many assessees were found to be accepting the currency notes which were banned, i.e., not legal tender and which could be deposited into banks only on grounds of factual reasons and good faith. However, when questioned about such cash deposits during demonetization, they failed to offer an explanation to the satisfaction of the Assessing Officers.

The unexplained cash deposits during demonetization are taxed under the Income Tax Act, 1961 at a flat increased rate of 60% (plus surcharge and education cess of 25% and 4% respectively). This levy is by virtue of Section 115BBE of the Income Tax Act. Moreover, a penalty of 10% is also imposed on fraudulent taxpayers under Section 271AAC.

To shore up the fiscal revenue and boost the economy’s growth, the tax officials have been taking serious steps of scrutinizing the past incomes of taxpayers to meet the government’s annual tax targets. Moreover, to accelerate the drive for speedy collection of revenue, the government has also extended an amnesty scheme (called Vivad se Vishwas scheme) to settle direct tax disputes stuck in litigation to March-end this year.

Also, Read: Effect of Demonetisation on NBFCs and MFIs.

1. What is an Advance tax? Ans. Advance tax is the tax which is paid in advance before completi...

To understand the tax benefit for homemade or handicraft business firstly we have to understand...