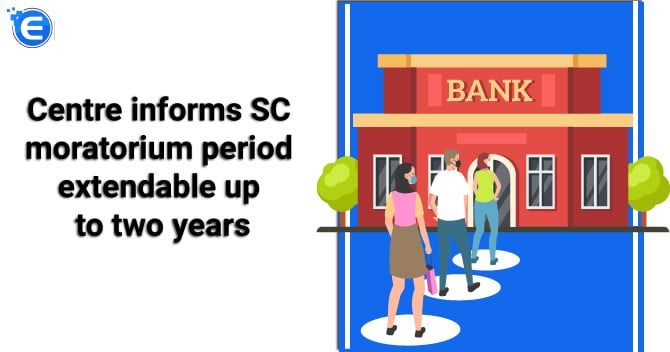 The Central Government informed the Supreme Court that the moratorium period for repayment of loans could be extended by up to two years according to the circular of the Reserve Bank of India.

Earlier the apex court had come down heavily on the Centre for failing to file an affidavit in time regarding its decision on if the interest can be waived or if it would stop charging interest on interest accrued during the moratorium period.

A moratorium means the temporary suspension of activity until future events allow lifting of the suspension or when the related issues are resolved. It is enacted in response to temporary financial hardships.

In simple words, moratorium means one doesn’t require paying EMIs for that time period, and no penal interest will be charged after that. It is not a concession but it is a deferment of the payment with a view to providing relief to borrowers facing liquidity concerns.

Background of the story

The bench was hearing a plea that was filed by an Agra resident who sought a direction to declare the Reserve Banks’ 27th March notification as ultra vires to the extent it charges interest on the amount of loan during the period of moratorium, which creates a hardship to the petitioner who was a borrower and creates hindrance and obstruction in the right to life (Article 21) guaranteed by Indian Constitution.

The petitioner had sought a direction to the government and the Reserve Bank to provide relief in repayment of the loan by not levying interest during the period of moratorium.

On the 4th of June, the apex court had sought the reply from the Finance Ministry on the waiver of the interest on loans during the period of moratorium after the Reserve Bank stated that it would not be wise to go for a forced waiver of interest, risking financial viability of banks.

The Supreme Court had stated that there are two aspects under consideration in this that include no interest payment on loans in the moratorium period and no interest to be charged on interest. It had observed that these times are challenging, and it is a serious issue because, on one side, the moratorium is granted, and on the other, interest is charged on loans.

On the 26th of May, the Supreme Court had asked the centre and the Reserve Bank to respond to the plea that challenged the levy of interest on loans during the period of moratorium. In its reply, the Reserve Bank of India had told the court that it is taking all possible steps to offer relief to the repayment of debt on account of the spread of the Covid-19 pandemic; however it does not consider it right to go for a forced waiver of interest, risking the financial viability of banks, it is mandated to regulate thereby putting the depositor’s interest in jeopardy.

Extension of moratorium period: Centres’ submission in the apex court

The solicitor general Tushar Mehta on behalf of the Centre and the Reserve Bank submitted that they are in the process of knowing the distressed sectors to vary benefits according to the hit that they have taken. The Centre also informed the bench that it had filed a reply as per its powers under the Disaster Management Act[1].

On 26th August, the Supreme Court had lashed out at the Central government as it had not filed the affidavit in time with regards to the decision of the government on whether the interest can be waived or if it can stop charging interest on interest accrued during the moratorium period. The Centre had to elucidate its position under the Disaster Management Act and file an affidavit entailing its power.

The solicitor general Tushar Mehta suggested that a meeting of representatives of the central government with the Reserve Bank and other banks must be held so that a proper solution can be arrived at. He further stated that Senior Advocate Harish Salve spoke to the bankers’ association and that most issues had been resolved already. The bench, headed by Justice Ashok Bhushan, said that they had heard this from the last three dates of hearing. It further stated that the country is suffering hardship and going through a problem, and it adjourned the matter.

In the affidavit, the centre submitted that Ex post facto change in the terms and conditions pertaining to the offer of moratorium favoring those who availed of it over those who made the extra effort of repaying according to the schedule will be grossly inequitable and patently unfair for those who didn’t avail of the benefits of the moratorium initially or gave it up eventually. It further added that a waiver of interest on interest during the moratorium period would also be against the basic canons of finance.

What are the exact consequences of the moratorium?

The moratorium period was available to every borrower irrespective of the fact whether one was impacted by the Covid-19 pandemic or not; therefore, those who were not impacted by it also availed it. This could not have continued for long, but RBI realized that many people were facing cash concerns; therefore, it allowed the lenders to create a scheme to restructure their loans.

Sale of goods by Duty-free shops is...

In case of “Atin Krishna V. Union of India”,at the arrival and departure terminals of inter...

As per Companies Act, 2013, the Company can raise money through three ways i.e public offer, pr...