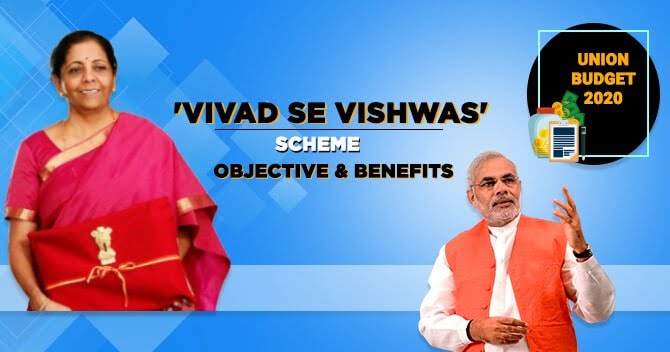 The Union Finance Minister Ms. Nirmala Sitharaman during her budget speech delivered on February 1, 2020, announced the launch of an amnesty scheme named ‘Vivad Se Vishwas– A Dispute Resolution Scheme 2020′. This scheme proposed by the Finance Minister of India aims to reduce the number of ongoing legal disputes in the domain of direct taxation. The proposed scheme offers a once in a lifetime opportunity to settle the unresolved issues pertaining to the Direct Tax regime in a simple and speedy manner.

Under the scheme, those taxpayers whose tax demands are caught up in disputes in various forums, can pay due taxes by March 31, 2020, and get a complete waiver of any interest or penalty. Although the scheme is open till June 30, 2020, however, some penalty may be charged if you fail to avail of the scheme before March 31, 2020.

The Finance Minister, in her budget speech, said that:

Currently there are 4,83,000 direct tax cases pending in various appellate forums, i.e. CIT, ITAT, High Court and Apex Court. Sabka Vikas Scheme introduced in indirect tax in the last budget has resulted into the settlement of 1,89,000 Cases.”
“This year, I propose to bring a scheme similar to the indirect tax Sabka Vikas for reducing litigation even in the direct tax.”

The core objective of the scheme launched by the FM is to provide a mechanism for resolution of pending tax disputes related to income tax and corporation tax. The proposed scheme aims to resolve 4,83,000 direct tax-related disputes pending in several appellate forums, namely, Commissioner (Appeals), Income Tax Appellate Tribunal (ITAT), High Court and Supreme Court. The scheme is expected to settle a significant number of these cases.

Moreover, the government has been witnessing a big shortfall in revenues, especially tax revenues. The Direct Tax collections of CBDT have been lower than the budget targets set by the government. Therefore, the proposed scheme of resolving pending tax disputes also aims at addressing the revenue shortfall and hence increases the revenues of the government.

Immunity to Appellant: Once a dispute is resolved, the designated authority cannot levy interest or penalty in relation to that dispute.

Following are some of the benefits of the proposed scheme:

Investment by Non Residents in Gove...

The Finance Minister, Mrs. Nirmala Sitharaman, with the announcement of the Union Budget on 01...

Opportunity in Global E-commerce market is phenomenal. Identification & capturing of the ma...