A Taxpayer has a vested right to personal hearing: Delhi HC 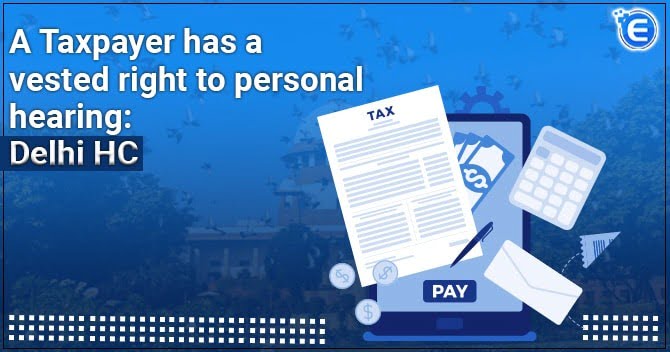 The Delhi High Court, in the case of Bharat Aluminium Company Limited v Union of India and Ors, ruled that an assessee must be given a reasonable opportunity of personal hearing if the assessee asks for the same under the income tax act. The hon’ble court further ruled that the provision of faceless assessment scheme doesn’t imply that no personal hearing can be granted and that a taxpayer has a vested right to personal hearing.

What is Faceless Assessment Scheme?

This scheme was introduced by the Central government in 2020 by insertion of Section 144B through the Taxation & Other Laws (Relaxation and Amendment of Certain Provisions) Act, 2020.

It was introduced in order to promote an efficient and effective tax administration, minimizing physical interface, increasing accountability and introduction of a team-based assessment.

The Right to Personal Hearing under IT Act: Case Law- Bharat Aluminium Company Limited v Union of India and Ors

The Bench of Justices Manmohan and Navin Chawla were dealing with a petition filed by Bharat Aluminium Company Limited that challenged the final assessment order and notice by the Income Tax Department under Section 143(3) of Income Tax Act[1].

The petitioner argued that the order was passed without following the principles of natural justice and the order was in violation of the scheme under Section 144B of the Income Tax Act as even after the ‘nil’ variation proposed in the show cause notice, addition was made to the assessed income.

It was alleged that such additions to the assessed income was made on a ‘false premise’ that the petitioner didn’t furnish relevant details in response to a statutory notice issued to them even though it was the own portal of the respondent that was having technical issues owing to which the petitioner couldn’t upload the file.

Further, the petitioner also argued that under Section 144B(1) (xvi) of the Income Tax Act, an opportunity should be given to the assessee if there is any variation of the assessment that is proposed and which is prejudicial to his interest.

The Ld. Counsel for petitioner stated that the petitioner had not been granted any opportunity of personal hearing, despite a specific request that was made under Section 144B(7) of the Act by the petitioner.

The Ld. Counsel further stated that the Court in the case of Sanjay Aggarwal vs. National Faceless Assessment Centre and Umkal Healthcare (P.) Ltd. vs. NFAC has held that it was incumbent upon the Department to accord a personal hearing to the assessee where a request of such nature was made under Section 144B (7) and in case of failure to do so would amount to violation of principles of natural justice.

To sum up the entire argument of the respondent, according to him, the personal hearing is discretionary and emphasised that under faceless assessment under Section 144B of the Act, the assessee doesn’t have any vested right to personal hearing and it could be granted depending on the individual facts of each case & fulfilling of the conditions laid down in SOP (November 23, 2020).

The Hon’ble Delhi HC stated that after hearing learned counsel for the parties, it is unable to comprehend how despite ‘Nil’ or ‘Null’ variation proposed in the show cause notice, additions were made to the assessed income in the draft Assessment Order & the final Assessment Order.

The court dismissed the respondents’ argument that personal hearing, according to its November 2020 circular, shall be allowed only in cases where facts are disputed. The court stated that such argument is untenable as cases involving issues of law would also require a personal hearing.

However, at last, in view of the revenue department’s concern that the scheme aims for no one-to-one interface, the hon’ble court suggested the identity of the assessing officer may be hidden or protected while extending personal hearing by either creating a blank screen or by decreasing pixel, density or resolution.

Accordingly, the Delhi HC set aside the impugned order and the notice and remanded the matter back to the Assessing Officer (AO).

The court’s ruling that an assessee has a vested right to personal hearing and it has to be given, if an assessee asks for it and the fact that right of personal hearing can’t depend upon the facts of each case, comes as a significant relief for assessees who feel aggrieved by the revenue departments action where no personal hearing was granted. The court also noted that, if the argument of the respondent/Revenue is accepted, then it, while hearing an appeal under Section 260A (which only involves a substantial question of law) will not be obliged in law to provide a personal hearing to the counsel for the Revenue.

A bond is an instrument via which the investors lend money to an entity (corporate or governmen...

Penalty in Case of Misreporting of...

Income needs to be fairly disclosed to the Government to determine actual tax liability and to...

Section 80TTA of the Income Tax Act provides the privilege to claim deductions on savings accou...