What is Voluntary Winding up of Companies? 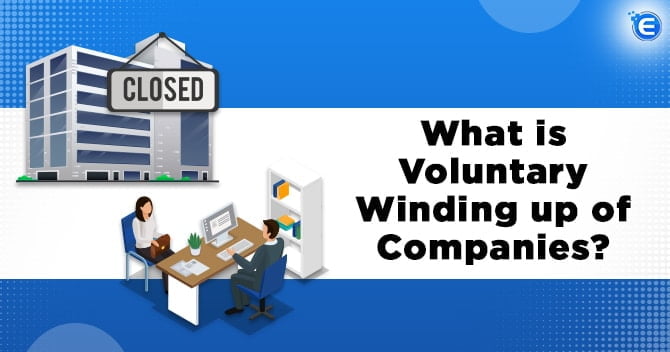 We must know that Companies Act 2013 provides the necessary option to companies for voluntary winding up of companies without the intervention of NCLT.

What is meant by voluntary winding up of companies?

There may be a time when a company cannot be run further and in the best interest of the company, the members may decide to end the operations of the company thus ending the life of a company. This voluntary end of operations of company is called in legal language as Winding up.

Who can be a Liquidator during the Winding-up Procedure?

We can categorize liquidator as follows

Conditions for voluntary winding up of companies

An entity is required to fulfil the following conditions in order to wind up the company voluntarily:

This declaration should be accompanied with documents like audited financial statements and record of business operations for the last two years or for the period after its incorporation. A report of the valuation of the assets of the company should also be provided.

Procedure for Voluntary Winding up of Companies

The following steps are involved in the process of voluntary winding up:

What are the benefits of timely winding up of companies?

The following are the benefits:

Voluntary winding up of companies will cause a shutdown of business operations of that company. The mandatory requirements of winding up should be complied with. In case you have any doubt regarding the same, contact Enterslice.

Can CIRP applicable on Company if n...

Introduction The (NCLAT) National Company Law Appellate Tribunal can initiate the (CIRP) that i...

Winding up is a process to dissolve a company or put an end to its corporate existence. There a...

Legal Analysis Winding up of a Comp...

The Winding-up of a Company under Companies Act 2013 in any of the following ways: By National...