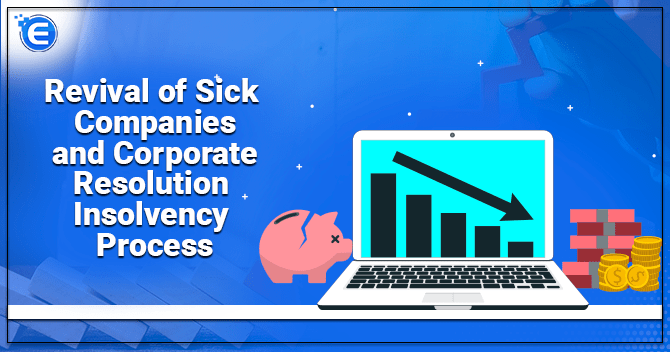 Industrial sickness can cause a terrible impact on Indian economy. Therefore it’s important to revive sick industrial units. In this article we shall discuss the revival process of such companies.

What is Sick Industrial Company?

As per the Companies Act 2013 Sick Industrial Companies Means:

Industrial Companies which has Accumulated losses in any financial year equal or more than 50% of its average net worth during four years immediately preceding the current financial year.

The growth of any country is dependent on how the industries are growing and generating revenue for the economy. With the growth of the industries, the economy will also grow so it is necessary to keep an eye on the growth of industries. As to regulate the Sick Companies, Government of India enacted a special legislation named as Sick Industrial Companies Act 1985. The main aim of the act is to determine the sickness of industrial units and initiate the revival procedure.

An insolvency resolution process can be initiated by either a creditor, or by the debtor, upon an event of default. At present the SICA Act, 1985 is repealed and the company in respect of which such appeal or reference or inquiry stands abated in BIFR and AAIFR may make reference to NCLT under the Insolvency and Bankruptcy Code 2016 by filing fresh application for Corporate Insolvency Resolution Process (CIRP) within 180 days from the commencement of IBC 2016.

Earlier laws pertaining to DRT and SARFAESI were the exclusive forums for banks/financial institutions while BIFR and Companies Act had limited application for sick companies, their revival and/or liquidation. The Insolvency and Bankruptcy Code, 2016 will overcome these kinds of problems.

Persons who are not entitled to initiate Corporate Insolvency Resolution

The revival of sick companies is crucial so as to prevent closing down of such unit which would further lead to hardships for employees. It will also cause loss of revenue to the state. In case you need any additional information, contact Enterslice.

Read our article:Voluntary Liquidation of a Company under IBC

All you need to know about AGM unde...

What is AGM under Companies Act? AGM under companies act stands for Annual General Meeting.&nb...

Maintenance of Books of Accounts: S...

MMaintenance of Books of Accounts is one of the mandatory compliances that every company needs...

According to the provisions of section 177 of the Companies Act, 2013 with Rule 6 of Companies...