Voluntary Liquidation of a Company under IBC 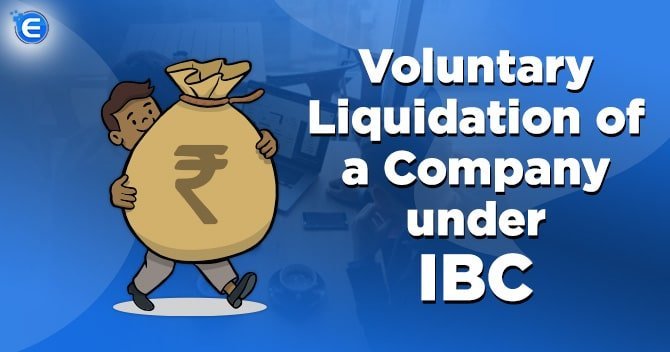 2. A declaration under sub-regulation (1) shall be accompanied by-

3. Thereafter, within four weeks of a declaration under sub-regulation(1)

4. A resolution passed under sub-regulation (3) or under section 59(3)(c), as the case may be, must contain all the terms and conditions for the appointment of the insolvency liquidator, including the remuneration due to him.

2. The Board of Directors or the designated partners must require the documents referred to in Regulation 3(1) and (2) to be presented to a creditor for his approval to be obtained.

A voluntary liquidation for a corporate person other than a company must be deemed to have commenced from the date of passing of the resolution under Regulation 3(3).

Effect of voluntary liquidation on status of corporate person

Appointment And Remuneration Of Liquidator

Eligibility for appointment as liquidator

1. An insolvency professional can be eligible to be appointed as a liquidator if he is independent from every partner or director of entity which a corporate person is going to be dissolved.

Explanation– A person shall be considered independent of the corporate person, if he-

2. A liquidator has to disclose the existence of any pecuniary or personal relationship with the concerned corporate person or any of its stakeholders as soon as he becomes aware of it, to the Board and the Registrar.

3. An insolvency professional will not continue as a liquidator of which he is a director or partner, or any other partner or director of such insolvency entity represents any other stakeholder in the same liquidation.

Procedure Of Liquidation And Distribution

All money to be paid in to bank account

2. The liquidator must pay the credit of the bank account opened under sub-regulation(1) all moneys, including cheques and demand drafts received by him as the liquidator of the corporate person, and the realizations of each day has to be deposited into the bank account without any deduction.

3. All payments out of the account by the liquidator above five thousand rupees must be made by cheques drawn or online banking transactions against the bank account.

1. The liquidator must distribute the proceeds from realization within six months from the receipt of the amount to the stakeholders.

2. The liquidation costs will be deducted before such distribution is made.

3. The liquidator may, with the approval of the corporate person, distribute amongst the stakeholders, also an asset that cannot be readily or advantageously sold due to its peculiar nature or other special circumstances.

1. The liquidator will endeavor to wind up the affairs of the corporate person within one year from the voluntary liquidation commencement date.

2. In the event of the voluntary liquidation continuing for more than one year, the liquidator will call a meeting of the contributories of the corporate person within fifteen days from the end of the year in which he is appointed, and at the end of each succeeding year and shall present a Status Report indicating progress in liquidation, including-

3. The Status Report will enclose an audited account of the voluntary liquidation showing the receipts and payments pertaining to liquidation since the liquidation commencement date.

Final report prior to dissolution

1. When the affairs of the corporate person are fully wound up, the liquidator shall prepare a Final Report consisting of –

2. The liquidator shall send the Final Report by registered post at their registered address by electronic means to –

3. The liquidator shall submit the Final Report to the Adjudicating Authority along with the application under section 59(7).

After the said amendment, all cases filed on or after the 01 April 2017 shall be governed by the Insolvency and Bankruptcy Code of India and the adjudicating authority shall be shifted from High Court to National Company Law Tribunal only. However, as per Rule 4 of the Companies (Transfer of Pending Proceedings) Rules, 2016, which was notified in December 2016 and came into effect from April 2017, states that Voluntary Liquidation of companies pending before any High Court before April 01, 2017 shall be dealt by that High Court only. But any fresh Voluntary liquidation process initiated on or after April 01, 2017, shall be instituted before the Hon`ble National Company Law Tribunal and shall be governed by the IBC 2016 and regulations thereof.

STEP I: A document is to be submitted called Submission of Declaration to Registrar of  Companies, which shall state that the said company shall or should be able to pay off its debt and it has started the process of voluntary liquidation to not defraud any person or entity;

STEP II: A Special Resolution shall be passed to approve the process of voluntary liquidation and an Insolvency Professional shall be appointed as a liquidator (“Approval“), within a time frame of four weeks after the submission of declaration. An approval of 2/3rd of the creditors shall also be required if the said corporate person has any unpaid debts.

STEP III: As soon as the Approval is granted a Public Notice is to be announced within 5 days of such approval in Newspapers as well as on the website (if any) of the Corporate Person inviting claims or objections of all stakeholders involved.

STEP IV: Intimation about the grant of Approval is to be sent within seven days of such Approval to the Registrar of Companies and the Board;

STEP V: The preliminary finding of the authorized capital, approximations of asset and liabilities, the proposed plan of action etc., is to be made into a Report called Preliminary Report, which shall and submitted to the corporate person within a period of Forty-Five days of the said Approval;

STEP VII: A bank account on the name of the said Corporate Entity which shall be followed by the words’ involuntary liquidation’, in any of the scheduled banks, for the purpose of receipt of all amount due to the corporate entity;

STEP IX: The amounts received from the realization of the Capitals shall be distributed within a period of six months to all the stakeholders involved;

STEP X: A Final Report is to be submitted by the Insolvency Professional appointed as the Liquidator for the Corporate person`s Voluntary Liquidation. Registrar of Companies and the Board shall also submit the final report.

STEP XI: An application is to be sent to the Hon`ble National Company Law Tribunal for the dissolution or winding up or voluntary liquidation of the Corporate Person,

STEP XI: After the application is submitted to the Hon’ble National Company Law Tribunal, it`s order of dissolution of the Corporate Person shall be submitted within a period of fourteen days to the Registrar of Companies.

Prior to the above Notification which notified the Insolvency and Bankruptcy Board of India (Voluntary Liquidation Process) Regulation 2017 (“The Regulation”) and introduced the concept of Voluntary Liquidation process which was governed by the provisions under Companies Act 2013 were not notified. Thereby meaning that voluntary liquidation or winding up of company continued to be governed by Companies Act before the Government introduced the notification on Section 59 of the IBC in 2017. Now, the IBC enables the insolvency proceedings of the Corporate Debtor turning Insolvent and also contains provisions for Companies who want to surrender their business and give up their right to carry on the same. Thus we see that Section 59 of the IBC expedites the whole process by removing the ambiguities and bringing a timeline to the whole process.

Understanding various aspects of In...

A resolution plan is a must when it comes to resolving a matter. In the corporate sector, the c...

Sale of Going Concern under IBC...

The sale of going concern means selling on “as is where is basis” wherein the liquidator se...