MCA Invites Public Comments for Changes Being Considered In IBC 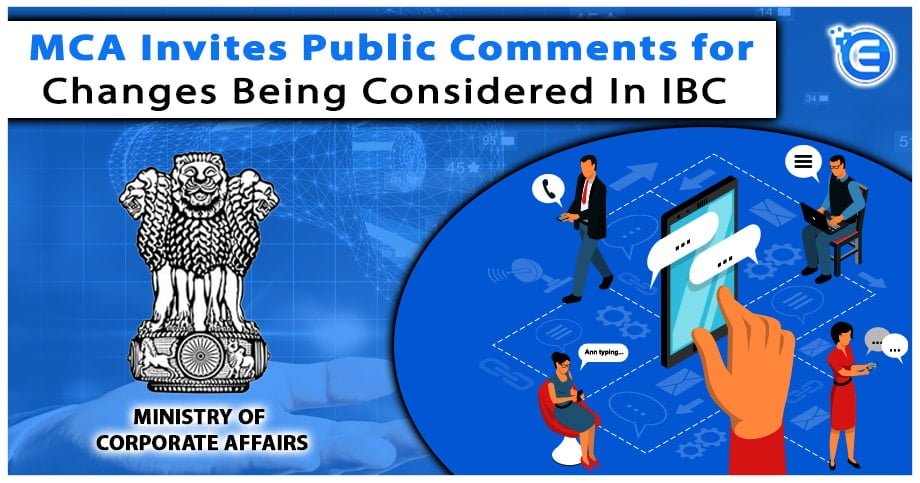 On January 18, 2023, the Ministry of Corporate Affairs (MCA), issued a notification inviting comments from the public on changes being considered to the Insolvency and Bankruptcy Code, 2016 regarding the use of technology in the ecosystem of IBC. Admission of CIRP applications, streamlining the insolvency resolution process, recasting the liquidation process, and the role of service providers under the Code. The present article shall discuss the changes in respect of using technology in the ecosystem of IBC and admission of CIRP proceedings.

Using Technology in the Ecosystem of IBC

The changes regarding the admission of CIRP Applications are listed below –

Restriction on the Promoter’s Right to Propose an IRP

Suggestions/comments, if any, along with brief justification, may be submitted online therein at the prescribed manner by 5:30 PM on 07.02.2023. The changes being considered with regard to the usage of technology and the admission of applications can significantly contribute to the better development of the Code and streamlined CIRP proceedings. The subsequent blogs shall deal with the other changes under consideration.

Read Our Article: MCA Requires Reporting on “What is not DEPOSIT?”

Rights of Preference Shareholders u...

It is significant to know that many companies in India are completely under IBC (Insolvency and...