Review of Financial Creditors under IBC 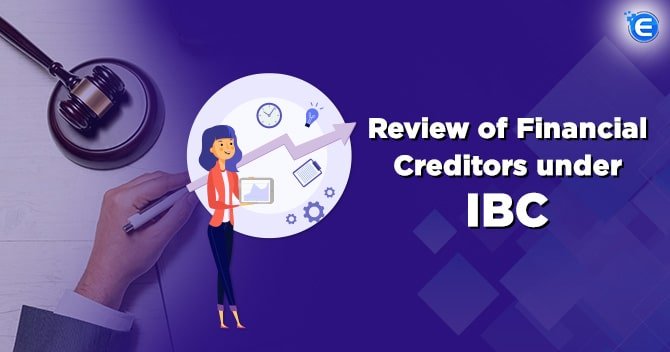 According to the Insolvency and Bankruptcy Code with respect to the Insolvency of corporate persons, the proceeding for the same can be initiated by the financial creditor, corporate creditor, or the operational creditor. The procedure to be followed and the method of instituting the proceedings are different for every above-mentioned category of creditors. As far as the financial creditor is concerned, the application for instituting a resolution process may be made even without waiting for raising a claim for the money, and there is no further need to prove that no dispute exists for the payment under consideration.

For a better understanding of financial creditors, we need to look at some other relevant definitions.

Debt– The code under section 2(11) defines debts as a liability or an obligation with respect to a claim that is due from any person and which includes financial and operational debt.

Financial Debt– The code under section 5(8) defines financial debt. It means a debt with interest, if any, that is disbursed against the consideration for the time value of money. It includes the following-

The object of the IBC is to ensure a smooth and economically viable resolution for resolving insolvencies. It aims to protect the interests of small investors. IBC helps in improving the ease of doing business.

Who is a financial creditor?

If we closely examine the definition of financial creditor, the words used in it are “Means,” which tells us that the definition is restrictive. It covers only those transactions which comply with the terms mentioned in the definition and nothing else.

In the past, we have seen duping by realtors widely. Due to a lack of proper regulation and control over their work, many home buyers are susceptible to such practices. The helpless homebuyers were paying the EMIs for the home loans, and many of them spent all of their savings in paying the EMIs. Many cases have been filed lately related to insolvency before the National Company Law Tribunal by several real estate and housing development companies. The moratorium period under IBC, 2016, begins once the application for insolvency is admitted.

Read, Also: Insolvency and Bankruptcy Board of India.

What is the procedure of filing application by financial creditors under IBC?

The procedure of filing application by financial creditors is specified in section 7 of the Insolvency and Bankruptcy Code, 2016. The procedure has been discussed below.

Emphasis on the financial creditors

As stated earlier, the financial creditor has got a special place, and it has an important role to play. The IBC clearly provides a special preference to the financial creditor as compared to the operational creditor through many procedures. Though, smooth and time-bound processes through the filing of the petition and transparency through information utility have benefitted all the creditors under the IBC. The time-bound process to get the recovery and related process and timely recovery of the money with interests has only improved the overall functioning of the financial setup.

See Our Recommendation: What is new under National Company Law Tribunal, NCLT Amendment 2020.

Transferring money from outside India is easy on the edge of Digital currency and in this artic...

The Non-resident Indian (NRI) or the OCI is allowed to invest in the capital instruments of Ind...