Analyzing the scope of Immunity to Corporate Debtor 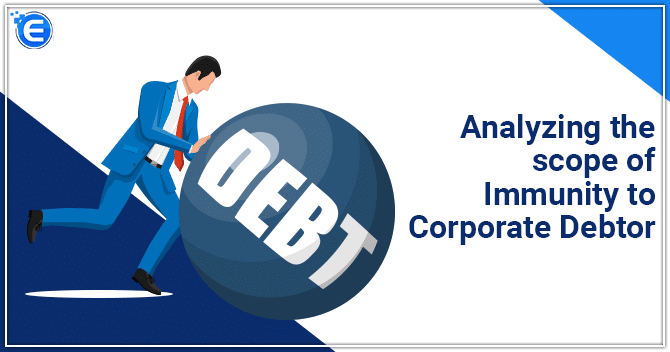 Who is a Corporate Debtor?

It do not include financial service providers that means banks or NBFCs.

Section 32A- Immunity to Corporate Debtor

Provided that in case a prosecution was instituted during the CIRP against such corporate debtor, it will stand discharged from the approval date of the resolution plan provided that the requirements to this sub-section having been met.

Further that every person being a designated partner as provided in clause (j) of Section 2 of the LLP Act 2008[1] or an officer who is in default as provided in clause 60 of Section 2 of Companies Act 2013 or was in charge of or responsible to the corporate debtor for the conduct of the business or associated with corporate debtor in any way and who was either directly or indirectly involved in the commission of the offence according to the report given or complaint filed by the investigating authority, would continue to be liable to be prosecuted for such an offence committed by corporate debtor notwithstanding that the liability of the corporate debtor has ceased under this sub-section.

For the purpose of the sub-section, it has been clarified that:

Section 32A (3) says subject to the provisions in sub-sections (1) and (2) and notwithstanding the immunity granted in this section, the corporate debtor and a person who is required to provide help under such law as applicable to such corporate debtor or person, would provide all assistance and co-operation to an authority investigating an offence committed before the commencement of CIRP.

So after going through Section 32A, it is clear that its intended object is two-fold:

It may be noted that the old directors and other associated persons of the corporate debtor will not have immunity from proceedings already going on or any other proceedings which could commence in future.

The statement mentioned above has been scrutinized by higher judicial forums. In the present scheme of things, it is negated by Section 32A of the Insolvency and Bankruptcy Code itself which denies such immunity.

The Supreme Court, in case of Anil Hada vs. Indian Acrylic Limited, explained the legal validity of such proceeding and, while interpreting Section 138 and 141 of the Negotiable Instrument Act 1881, held that when the company was drawer of the cheque, such company was a principal offender under Section 138 thereof.

The Supreme Court held that the remaining persons were made offenders through legal fiction created by the legislature, according to the section. Expounding further, it held that the provisions didn’t contain a condition that prosecution of the company was sine qua non for prosecution of other persons.

The provisions containing the liability of directors and other persons in case of offence committed by the company are listed under different acts like the Industries (Development and Regulation) Act, Foreign Exchange Regulation (FERA) Act, MRTP Act, Essential Commodities Act, Employees Provident Fund and Misc Provisions Act, Minimum wages Act, Apprentices Act, Payment of Gratuity Act, Central Excise and Salt Act, Negotiable Instruments Act etc and the provisions are similar as well. Therefore the law as prescribed under other Acts by the courts shall be equally applicable to the Income Tax Act 1961.

Considering the provisions of Section 32A of the Insolvency and Bankruptcy Code and the judicial authorities as provided above, the idea that the directors cannot be prosecuted without prosecution of the company is not legal. It is more in case of Section 32A of the IBC, which provides immunity to the company, and it is a reasonable ground in itself as held by the Supreme Court for proceeding against the director.

Hence it can be concluded that there is no immunity to the old directors or other persons associated either directly or indirectly with the corporate debtor pertaining to any offence by the corporate debtor in the past, and proceedings can be initiated against them without impleading the company.

Read our article:Insolvency and Bankruptcy Law and its Implementation Challenges in India

Understanding various aspects of In...

A resolution plan is a must when it comes to resolving a matter. In the corporate sector, the c...

Insolvency and Bankruptcy Law and i...

The insolvency and bankruptcy law is essential to an economy. These laws help in reorganization...