Difference between Financial Creditor and Operational Creditor under IBC, 2016 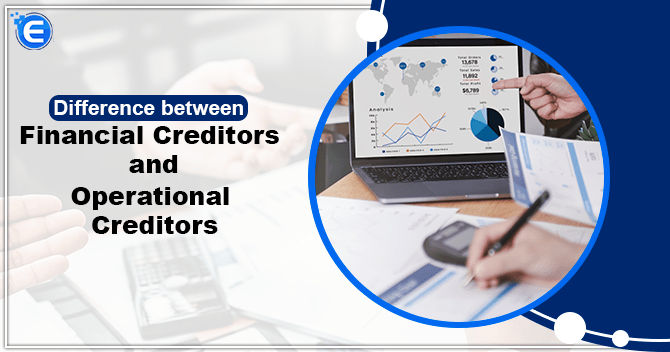 Currently, the validity of petitions to initiate a corporate insolvency resolution procedure is mostly dependent on the applicant first convincing the Tribunal that it is either a “Financial Creditor” or an “Operational Creditor” under the Insolvency and Bankruptcy Code, 2016. Under the IBC, 2016, a financial creditor and operational creditor are two critical components of the insolvency process.

Section 5(7) of the Insolvency and Bankruptcy Code defines a “Financial Creditor” as:-

“A person who owes a financial debt, including anybody to whom such debt has been legally assigned or transferred.”

To determine if a person is a financial creditor, the debt owed to that person must come under the definition of a “Financial Debt” as defined by Section 5(8) of the IBC.

Section 5(8) of the IBC defines a “Financial Debt” as follows:-

“A debt, including any interest, that is disbursed in consideration for the time worth of money & includes:-

Section 5(20) of the IBC defines an “Operational Creditor” as:-

“Anyone who owes an operational debt, including anybody to whom such liability has been legitimately assigned or transferred.”

To determine if a person meets the criteria of an operational creditor, the debt owed to that person should meet the definition of an operational debt as established in Section 5(21) of the Insolvency and Bankruptcy Code.

Section 5(21) of the IBC defines “Operational Debt” as follows:-

“a claim for the supply of goods or services, as well as employment, or a debt for the repayment of dues originating under any legislation now in effect and payable to the Central Govt., any State or any regional government.”

Priority given to Financial Creditor

View of Hon’ble NCLT on the Status of Operational Creditor

In the case of Col. Vinod Awasthy vs. AMR Infrastructure Limited (C.P. No. (IB) 10 (PB)/2017), the National Company Law Tribunal determined that operational creditors are those whose responsibility/liability from the business arises from a transaction on operations. Therefore, an operational creditor is a wholesale vendor of spare parts whose spark plugs are retained in inventory by auto car technicians and who gets paid only when the spark plugs are sold.

Likewise, the lessor from whom the company rents space is an operational creditor to whom the company owes monthly rent throughout the course of a 3 year lease contract. The Hon’ble Tribunal further ruled that the Petitioner had not delivered any products or given any services in order to be designated as an ‘Operational Creditor.’

As a result of the above, it is clear that Tribunals are hesitant to hear petitions from anybody who does not meet the criteria of financial creditor and operational creditor as defined by the IBC. This condition must be met in order to begin business insolvency procedures under the IBC. The NCLT[1] has made it possible for the new insolvency and bankruptcy law to be strictly enforced.

To successfully initiate a corporate insolvency resolution procedure against a debtor, it is necessary to demonstrate that the creditor fits within the ambit and extent of the definitions of ‘Financial Creditor’ as per Section 5(7) or ‘Operational Creditor’ as per Section 5(20) of the IBC. According to the case study described above, the Tribunals are severe in construing the term of ‘Operational Creditor’ under the IBC and are refusing to accept petitions when the petitioners do not technically come within the scope of the IBC and have other viable remedies available. The Hon’ble Tribunal made similar rulings in the following instances before it, notably Mukesh Kumar vs. AMR Infrastructure Limited, (C.P. No. (IB)-30 (PB)/2017) and Pawan Dubey and Another vs. J.B.K. Developers Private Limited, (C.P. No. (IB)-19 (PB)/2017).

Read our article:Analyzing the scope of Immunity to Corporate Debtor

Analyzing the scope of Immunity to...

The government inserted a new section by the IBC Amendment Act 2020 in the Insolvency and Bankr...

Scheme of Arrangement for Corporate...

The conundrum as whether section 29A of Insolvency and Bankruptcy Code, 2016 will apply to sche...