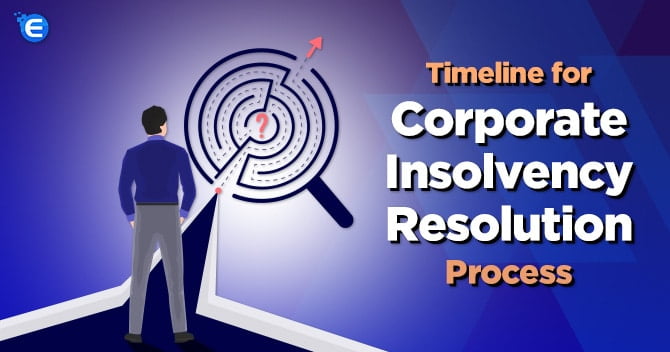 In order to tackle this challenge, the Insolvency and Bankruptcy Code (Amendment) Act, 2019 (Amendment Act) amended the Code to restrict the time period in which the CIRP shall be completed. A proviso has been included in sub-section 3 of section 12 by way of amendment. It states that the CIRP shall be completed within 330 days from the Insolvency Commencement date, including any extension of the corporate insolvency resolution process and the time taken in legal proceedings with respect to such CIRP. In order to understand the timeline and other relevant details, let us first have a clear understanding of the term corporate insolvency resolution process (CIRP).

What is the meaning of the Corporate Insolvency Resolution Process?

The insolvency resolution process of a corporate debtor is called the Corporate Insolvency Resolution Process. It is a recovery mechanism for creditors wherein if a corporate/company becomes insolvent, then a financial creditor, operational creditor, or the corporate may initiate CIRP. A company may be declared as insolvent if it is inefficient to pay off its debts to the creditors. CIRP is also a process through which it can be known whether or not the person who has defaulted is capable of repaying the debt.

The Corporate Insolvency Resolution Process may include ways to revive the company like raising funds for operation, seeking a new buyer to sell the company. The debts can be taken care of if another person submits a resolution plan to take over the company and pay the outstanding debts. In case the resolution plan is neither submitted nor approved by the committee of creditors, the CIRP process would fail.

How to apply for Corporate Insolvency Resolution Process?

The procedure for resolution or liquidation is as follows:

Time Frame for completion of CIRP

The extension of the period of CIRP under this won’t be granted more than once. The amended proviso provides that the Corporate Insolvency Resolution Process will be completed mandatorily within three hundred thirty days from the insolvency commencement date, including the time taken in legal proceedings with respect to such process. It also provides that if the CIRP of a corporate debtor is pending, i.e., it has not completed within the period referred to in the above-mentioned lines, such resolution process shall be completed within ninety days from the commencement of insolvency and bankruptcy code (Amendment Act).

Section 12 of the Code provides that the resolution process of a corporate debtor must be completed within 330 days from the insolvency commencement date.

The 330 days period includes the following:

In case the resolution professional fails to submit the resolution plan within the prescribed time period of 180 days or 330 days, including the extension granted under the section, the adjudicating authority has the right to initiate liquidation procedure. Initiation of liquidation procedure may result in winding up of the company, and further, the proceeds shall be distributed among the creditors as per the Code.

Serious consequences shall be followed if the resolution process is not completed within the prescribed time period; therefore, it is critical to ensure timely completion of the process.

The table below represents a model timeline for Corporate Insolvency Resolution Process:

Earlier, there were many confusing timelines, and it leads to multiple interpretations, thereby not only causing confusion to the stakeholders, but frequent litigations hampered the entire process. The new timelines may help in avoiding such inconvenience and delays. The amendment contains enough teeth to ensure timely completion of the process. An official finding suggests that this insolvency law has improved the resolution process in India as compared to earlier measures. The government has been proactive in taking steps to improve the efficiency of the insolvency and bankruptcy code by increasing the number of NCLT benches and the number of insolvency professionals. It shall also help in facilitating the process of CIRP.

Voluntary Liquidation of a Company...

The Insolvency and Bankruptcy Code (IBC), 2016, has consolidated and amended the laws in relati...