Regulatory framework of issue of securities to foreigners 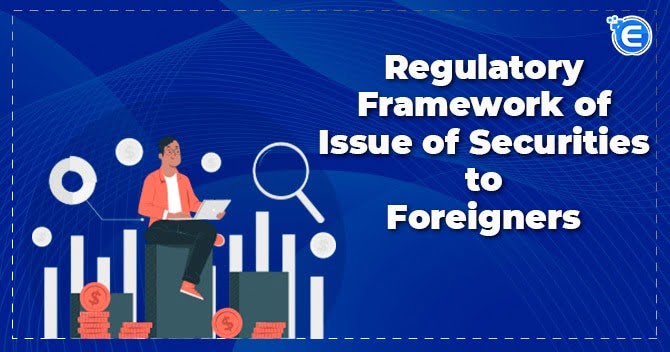 India offers the world lower corporate taxes and skilled labour. Therefore, companies across the world make their investments in India. One of the most sought after modes of investment in India is through Foreign Direct Investment (FDI). The economic liberalization process initiated since 1991 has increased inflow of FDI. This piece of writing covers the process of issuance of securities to foreigners and foreign entities for making investment in Indian companies in the form of shares and other securities.

What is the regulatory framework for issuing securities to foreigners and foreign entities?

The following laws are applicable to the issue of securities to foreigners and foreign entities:

What are modes of issuing shares to foreigners and foreign companies?

A company adopts the following two modes for issuing securities to foreigners and foreign companies under the provisions of Companies Act, 2013:

Under the FEMA (Non-debt instrument) Rules, it is stated that the price of the Capital Instruments of an Indian Company cannot be evaluated less than the Fair Market Value (FMV). This calculation is done on the basis of internationally accepted pricing methodology for valuation on arm’s length basis. This valuation is carried out by a duly certified CA or a SEBI registered Merchant Banker or a practicing Cost Accountant.

According to the provisions of the Companies Act, only a valuer registered with the IBBI has been authorised for valuations of shares and securities issued under preferential issue and private placement. Therefore, if a company is issuing shares and securities under private placement, then an additional valuation report will be prepared for the submitting to the ROC.

From the above discussion, it can be observed that different statutes prescribe different kinds of valuation. The government has made efforts to formalize the profession of valuation of shares by introducing the provision of registered valuer under Companies Act, 2013. Because of this step there is no dearth of registered valuers in India for financial and securities assets. Moving forward, the government should make amendments to introduce the provision of registered valuer in the Income Tax Act and FEMA. This will bring ease of doing business for the companies where they will need only one valuation certificate for one transaction.

How should a company receive payment for issuing shares under FDI ?

An Indian company who issues shares under FDI should receive the share subscription money through any of the following two methods:

The reporting for issuing of shares and securities to foreigners or foreign companies by an Indian Company is done in a single form of FC-GPR. It reports about the remittance and allotment. The Reserve Bank of India has simplified the cumbersome procedure of FDI reporting for the Indian entities by consolidating multiple forms into a single master form called as Single Master Form (SMF) which is found on the Foreign Investment Reporting and Management System (FIRMS) portal.  The entity needs to fill only a single form FC-GPR after allotment is done within a period of 30 days from the date of issuance of shares.

The form requires for certain specific details such details of the investee company, percentage of FDI which is allowed by the FDI policy, main business for which the investment is being made, the date of issue of shares, route adopted for investment, details of foreign investors, type of securities issued.

Documents to be attached

The following documents need to be attached with the master form:

Issuance of securities to foreigners and foreign securities is a complicated process which requires a host of documents, valuation and reporting from a professional recognised by law and also requires compliance of multiple laws. Therefore, it must be done with care and caution or it will attract hefty penalties and unnecessary litigation. Therefore, the companies must take the help of professionals for smooth process of filing procedure.

FLA stands for Foreign Liabilities and Assets. Annual Return on FLA has been notified...

Entrepreneurs and companies establish their business globally to get many benefits of the forei...