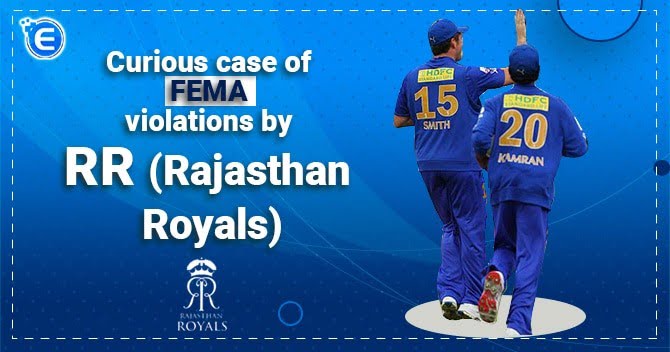 A curious of case of FEMA violations by RR has been discussed in the following piece of information wherein the Directorate of Enforcement has alleged that the promoters of erstwhile famed IPL franchisee of RR had committed violations under FEMA by receiving funds from foreign sources in the personal account of promoter in the name of FDI investment in the company’s account of a company which had not even come into the existence when the alleged transactions were done.

Facts of the Case FEMA violations by RR

A private limited company in the name of M/s. Jaipur IPL Private Limited (JIPL) was incorporated in the March of 2008 under the provisions of Companies Act, 1956. This company is a fully owned subsidiary of EM Sporting Holdings. This is the company which floated the famed Indian Premier League (IPL) franchisee of Rajasthan Royals (RR). RR is the franchisee that won the first edition of the IPL in 2008.

The bid for the franchisee of RR was made by one Manoj Badale from his personal account to the BCCI. It must be noted that JIPL had not come into existence by then and the bid was made from Manoj Badale personal account and not from the JIPL’s company account. In fact, JIPL had not even come into existence. It is only after the bid for the franchisee of RR was secured that the corporate structure of the JIPL i.e. the company JIPL came into existence. After securing the bid JIPL was incorporated as a company under the provisions of the Companies Act, 1965. The JIPL subsequently showed that the money received by the company as Foreign Direct Investment (FDI).

It was found that the money received as FDI by JIPL did not come into the company’s account rather the money came into the personal bank account of Mr. Manoj Badale who had made the initial bid to the BCCI for securing the franchisee of RR. Mr. Manoj Badale was the director of United Kingdom based Emerging Media and held stake in the JIPL to the tune of 32.4%.

The Directorate of Enforcement (ED) took cognisance of the matter and issued show cause notices to the JIPL for committing violations under Foreign Exchange Management Act in April of 2011. In the notice the ED alleged that JIPL was in violation from the provisions of FEMA by receiving funds from abroad in an illegal manner. After investigations done by the ED, it came to a conclusion that the JIPL came into existence only in March of 2008 whereas the payment for the initial bid was made just before from the personal account of Mr Manoj Badale on behalf of consortium of investors led by Emerging Media Ltd.

The Foreign Exchange Management Act, 1999 (FEMA) prescribes that a Non- Resident Indian (NRI) can make investment in India only under section 6 read with Regulation 5 of Foreign Exchange Management (Transfer of issue of Security by a person Resident Outside India) Regulations, 2000. The provision says that an NRI can remit money to a company for issue of shares only through normal banking channels or through NRE/ FCNR(B) account.

In this case it was discovered that the company was not even incorporated at the time when the money was remitted in India rather money was parked into the personal account of Mr. Manoj Badale who then deposited this money as a bid for securing the franchisee of RR. The ED alleged that JIPL brought the funds through improper channels and showed them as FDI. On further investigations conducted by ED, it was discovered that the funds were routed from Mauritius and UK.

Having conducted its investigation, the ED issued a notice and imposed a penalty of Rupees 100 crores.

Verdict of Appellate Tribunal on FEMA violations by RR

In response to the notice sent by the ED to JIPL, the JIPL approached the Appellate Tribunal. The appellate tribunal upheld the allegations made by the ED on account of FEMA violations by RR. The tribunal found merit in the allegations that the RR promoters committed violations under FEMA by receiving funding illegally from foreign sources and depositing the same in the account of BCCI bidding for the franchise of RR. However, the tribunal reduced the amount of penalties that were imposed on the entities involved in the given transactions and as far as the penalties that were imposed on the individual directors, they were struck down.

The tribunal while hearing the matter found merit in the arguments made by the ED that all the three transactions made to the BCCI in relation to the bids were made by a person that is different from the investor but had an overseas source from a Mauritius based entity to which shares were supposed to be issued.

The tribunal also noted the fact that correspondences were exchanged with an accounting firm which indicated that an arrangement was made to route the investment through Mauritius, but the funds were actually made from a source in United Kingdom which in the first place is against the law.

The order of the tribunal is based on the fact the Reserve Bank of India (RBI) and Foreign Investment Promotion Board (FIPB[1]) had already rejected the offer for issuance of shares by the promoters of RR. The tribunal while giving its order also noticed the fact that the promoters could not satisfy the FIPB about the receipt of foreign exchanges received by the appellants.

However, a big relief came for some of the individual directors of the promoters of the RR when the Tribunal struck down the penalties imposed on them by the ED. The reason given by the tribunal on striking down the penalties on the individual directors is that the ED failed to completely satisfy the Tribunal that these directors were involved in the day to day functioning of the alleged Mauritian and UK based entities when the alleged transactions were made in the year of 2008. The Tribunal also noted the fact the merely holding the position of Directorship at the time when the culpable transactions were made does not make it a sole basis for the imposition of penalty by the ED.

It is duty of an adjudicating to deliver a decision which not only checks violations of law of the land but also see to it that the decision is apt and neither too meek nor too oppressive. The decision made by the Appellate Tribunal was very apt where it not only imposed penalties for violating the provisions of FEMA thereby maintaining the writ of law of the land but also keeping the penalties very apt so that the laws do not become too oppressive and be proportionate to the crime. The court found that the though FEMA violations by RR were committed but they were not that serious to punish the culprits with the highest possible penalties. Therefore, the penalties were reduced by the order of the Tribunal.

All you need to know about Authoris...

It is impossible to think that the Reserve Bank can do all transactions in the foreign exchange...