Kinds of Cases handled by the ED 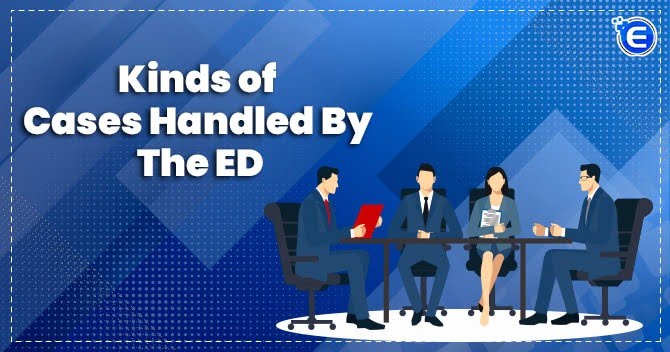 The Enforcement Directorate (ED) was established in the year 1956, with its headquarters in New Delhi. It works under Foreign Exchange Management Act (FEMA), 1999 and under some of the provisions of the Prevention of Money Laundering Act. It investigates and prosecutes the cases under the Prevention of Money Laundering Act. There are different kinds of cases handled by the ED.

The Department of Revenue has administrative control over the Enforcement Directorate for the operational purpose, whereas its legislation and amendments are under the control of the Department of Economic Affairs.

The head of ED is a director and headquarter in New Delhi, and it has five regional offices, Mumbai, Chennai, Chandigarh, Kolkata and Delhi, which are headed by Special directors of Enforcement. In Ahmedabad, Bangalore, Chennai, Chandigarh, Mumbai, Kochi, Delhi, Panaji, Guwahati, Patna, Hyderabad, Jaipur, Jalandhar, Lucknow and Srinagar, it has a zonal office with Joint Director as head and sub-zonal offices with deputy director as head at Bhubaneswar, Indore, Nagpur, Madurai, Kozhikode, Ranchi, Dehradun, Allahabad, Raipur, Surat, Shimla, Jammu and Vishakhapatnam.

The Enforcement Directorate has extensive powers given under the Prevention of Money Laundering Act[1] and Foreign Exchange Management Act, as different kinds of cases handled by the ED.

Powers of the Enforcement Directorate

The main powers of the ED defined under FEMA and PMLA are:

It can conduct an inspection/raid at any place in India with the search memo issued by investigating officer as per the provisions of the Criminal Procedure Code, and even if such an investigation or raid continues till tine, no one will question it. However, if the place inspected or raided has a woman, then it cannot be carried out till night, and it should be conducted during the day only, but it can continue till night if the investigating team has a woman officer. The investigation agency, along with the local police, should support the ED during the raid or search. The presence of two dignified individuals at the time of the raid and the presence of an independent witness (as per section 100 of CrPC) is mandatory, but even if the search is conducted without an independent witness, then also it will not be questioned.

The house owner should sign the search memo for the raid, and if he does not do that, the ED can forcefully start the raid. ED can arrest any person during inspection or raid under Section 19 of the Prevention of Money Laundering Act, and it can also seize or attach the property under section 17 or section 8 of the same Act. And to release such property, one has to take the order of the court.

According to section 50 of the Prevention of Money Laundering Act, any person who receives a summon from ED has to appear at the place mentioned, and if he fails to do so, the ED has the power to take action against or can arrest him.

Kinds of cases handled by the ED

There are different kinds of cases handled by the ED, including cases that fall under the above mentioned two Acts. These cases can be:

Most of the cases are related to money laundering.

The prohibitions given under FEMA are:

These can also be considered as kinds of cases handled by the ED.

When the Centra Government believes that an act has been done in contravention of the FEMA, the government can seize the value equal to that Act, under 37A of the Act. Contravention of any provision of FEMA would attract a penalty of thrice of the sum involved in the contravention, and if the amount cannot be calculated, then Rs. 1 lakh. In case of continuation of such contravention, the penalty will extend to Rs. 5,000/- each day since the day of one of continuity of contravention. The time period given to make payment of the penalty is 90 days, and if such penalty is not paid within such time period, then the ED will be authorized to recover such penalty and arrears of it.

PMLA deals with the offences of money laundering and is applicable to whoever is directly or indirectly involved or attempts or is part of any activity or process in connection to money laundering. It defines the obligation of banking institutions, financial institutions, and intermediaries to identify their clients and all the transactions and to furnish information on such transactions to the Financial Intelligence Unit of India. It empowers the ED to conduct an investigation in cases of money laundering. It also has an appellate body to deal with appeals against the authority.

PMLA makes any court a special court to deal with cases under this and asks the central government to sign an agreement with another country’s government to comply with the provisions of PMLA and to investigate or share information related to the offences under PMLA.

This Act was made under the Prevention of Money Laundering Act. It allows the special courts set under PMLA to confiscate or seize the property of any offender of economic offences who has been charged over 100 crores and trig to avoid judicial proceedings. After confiscation, the property will go into the hands of the central government. This Act prohibits such offenders from filing or defending any case.

The offences listed under this Act are:

Conversion of Foreign Exchange and Prevention of Smuggling Activities Act

The COFEPSA Act gives power to executives to any person involved in smuggling activities; such detention can be done on apprehensions also. It provides detention in cases like Conversion and augmentation of foreign exchange and Smuggling activities.

There are so many different kinds of cases handled by the ED which have attracted the become famous globally and demanded a large media attraction. Some of them are:

The Enforcement Directorate (ED) has been working mainly under the FEMA and PMLA. It has been given of investigation similar to the investigating power given to an Income Tax authority as well as the power on investigation provided under the CrPC. There are different kinds of cases handled by the ED, but mostly they are related to money laundering. The ED is empowered to search and seize the property of any offender, and no one can question such investigation, even if it can continue its inspection during the night also, except in the case in which a woman is involved. The summons issued by the ED can also not be questioned by any person. Under the Fugitive Economic Offenders Act, it can confiscate the property of any economic offender. Such property will be vested in Central Government.

With effect from June 1, 2000, FEMA came to power with the objective of enabling all the extern...