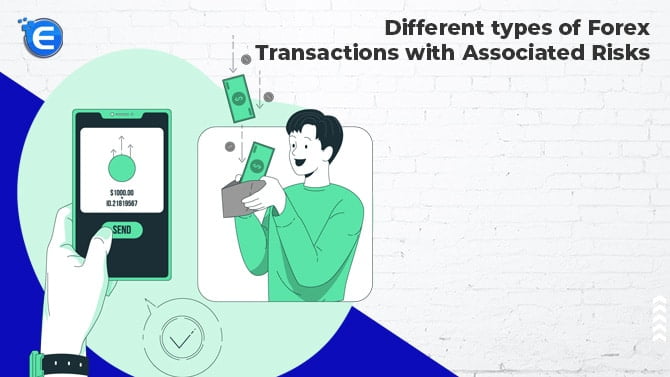 The following are the types of forex transactions:

In case of forward transactions, the buyer and the seller agree to sell and purchase currency after 90 days period of the agreement at a fixed exchange rate. Forward transactions take place in the forward market.

An investor gets the right to exchange the currency in one denomination to another at a fixed exchange rate under the option transactions. However, he isn’t obligated to exercise the option.

This refers to buying a foreign currency in one market and selling it in the other at a higher price. It allows investors to make profits from the difference in the exchange rate in different markets.

What do you mean by Forex Transactions Risk?

This indicates the possibility of losses that may be incurred when trading in foreign currencies due to the fluctuations in currencies. It outlines the probability that the investments’ worth can decline due to the changes in the relative value of the currencies involved.

When an individual enters into a forex transaction, there is often a time lag in agreeing on the terms of the transaction and performing it to settle the contract. This interval creates a short term vulnerability to currency risk that arises from the possible variation in the price of the currency in relation to the other currency.

Such an exchange rate risk associated with the time delay between entering into a deal and its settlement is called the transaction risk. The transaction risk has the potential to cause unanticipated profits as well as losses.

The transaction risk is higher in case the time delay between entering the contract and its settlement is prolonged. This is due to the fact that there would be more time available for the exchange rate to fluctuate.

How can one tackle this transaction risk?

The following strategies can be adopted in order to hedge the transaction risk:

A person may invest in a forward contract to be executed at a future date agreed by locking a pre-determined exchange price for the currency[1].

As the transaction risk is directly proportional to the time lag between entering the contract and its settlement, a near time contract must be undertaken to minimize the risk vulnerability.

Risk is intrinsic to every forex transactions. The transaction risk has the potential to cause unanticipated profits as well as losses. However, the risk can be reduced, and the investor can get reasonable control over the profits and losses of the trade by following a strategic and planned approach.

Read our article:Framework for Possession of Foreign Currency in India

Bet365 is an online betting platform that is making rounds of news in India from the last few m...

ECB are the instruments where the Indian borrowers obtain loans from foreign sources. ECB’s i...