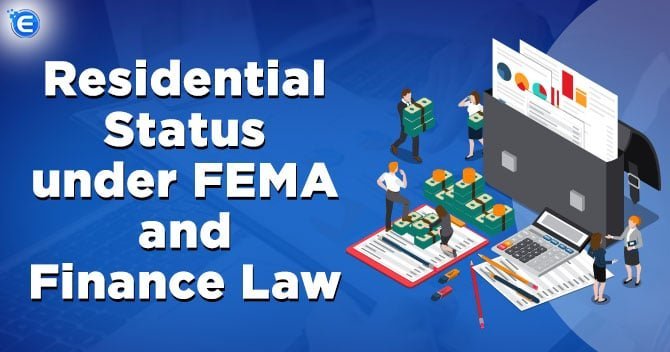 For ease of understanding and interpretation, the following have to be considered:

A person who is resident in India (PRII)

The meaning of PRII is interpreted under section 2(v) I of the FEMA Act. It states that if an individual has stayed in India for more than 182 days, then for treatment and residential status, the individual is considered as an Indian Resident. However, section 2(v)i of the FEMA has specific exemptions.

These exemptions do not include the following:

PROI (person who is resident outside India)

Under section 2(w) of the Foreign Exchange Management Act, 1999 (FEMA) defines a person who is resident outside India. This would include a person who is not resident in India. This would apply to Non-Resident Indians, OCI cardholders and other individuals. Foreigners would also be considered under this definition for determining residential status.

Example for Residential Status under FEMA

If X stayed more than 182 days in 2017-18, then he would be considered a resident to determine the residential status of ‘X’.  For understanding the residential status under FEMA, we have to consider the number of transactions which occur within the financial year. This interpretation is different from that which is explained under the Income Tax Act, 1961.

For understanding the above example, we can also apply the respective definitions which relate to the definition of a person resident in India under section 2(v)i of the FEMA act 1999. If the person goes outside India for employment or carrying out business, then he will not be considered as a resident.

However, if the individual comes for a specific period, say for a month within the financial year and then goes back abroad for employment. As per the above he will be still treated as a non-resident as per section 2(w) of the FEMA act. In 182 days, if the individual stays 30 days outside India, then he would not be considered as a resident for determining the residential status.

For determining the residential status of an individual, it is important to understand these tests. Here it is necessary to classify the tests as Test 1, Test 2 and Test 3. If an individual or a person falls under one of the above tests, then he will be considered as a resident Indian.

This test is used to identify if the individual is a resident of India. To determine the tax status, the Income-tax department would use the below test for understanding the status of the assessee. As per the test, the following has to be satisfied:

This test is used to identify if the individual is considered a resident but not an ordinary resident. This test is also known as the RNOR test or called as the Resident Not Ordinary Resident test.

To satisfy the criteria and conditions of the RNOR test, the individual must satisfy the requirements of test 1 along with some other conditions.

Difference between FEMA and Income Tax Law for Residential Status

Under the Income Tax law, all the above tests must be satisfied to consider the individual as a resident Indian. However, the conditions which are present under the Income Tax Law are different when compared to the conditions which are present under FEMA.  Both FEMA and Income Tax laws are different. When applying FEMA for treatment of residential status,  the amount of transactions performed is considered for the treatment of tax. The transactions have to be performed between a resident and non-resident.

When it comes to the income tax act, all the tests have to be satisfied. However, the basic test, i.e. test one is similar when interpreting section 2(v) of FEMA and 6(1) of theIncome Tax Act, 1961.

There are significant amendments made in the residential status to be classified as a residential Indian and NRI. The following are the amendments:

Therefore from the above, the finance act, 2020 has not repealed the meaning of NRI under respective FEMA and Income Tax Law. Only changes are the taxable income which is earned by an individual under the respective laws.

Read our article:Residential Status under FEMA and Finance Law

Transfer Shares from Non Resident I...

Foreign Exchange Management Act, 1999, has laid down the regulations for transfer of security f...

Purpose of NRI Borrowing from Resid...

NRIs may consider borrowing from a resident Indian due to various factors. This can be the rate...

Compliance for Import of Goods unde...

Importing is the process in which goods are brought into a particular country. The mode of impo...