A Complete List of Penalties under the Income Tax Act 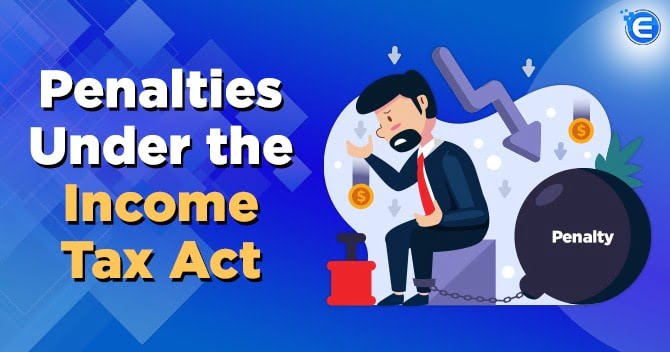 Penalties under the Income Tax Act, for default in making payment of Self Assessment Tax

In case the total income of the individual does not exceed Rs. 5 lakh, then penalty fee payable will be Rs. 1000.

Penalty for default in making payment of tax

Late filing fees for delay in filing the TDS/TCS statement

As mentioned in section 200(3) every person is liable to deduct tax at source and must submit a statement in respect of tax deducted by him, i.e. TDS return.

As per the provision to section 206C (3, every person who is liable to collect tax at source must furnish a statement in respect of the tax levied by him, i.e. TCS return.

Penalty for late filing of TDS/TCS return is specified in Section 234E –According to this section in case, a person fails to file TDS/TCS Return shall be liable to pay a sum of Rs. 200 for each day during which the failure continues.

Penalties under the Income Tax Act, for default in furnishing return of income

If the assessee who is required to file income tax returns fails to file it within the due date as per clause under section 139(1), then according to section 234F, he will be fined:

As per section 142(1), the Assessing Officer can issue a notice asking the taxpayer to file returns or produce any documents as and when required.

According to Section 142(2A), an assessee needs to conduct a special audit.

Section 143(2) –the AO will issue a notice before conducting scrutiny assessment.

Penalty for underreporting and misreporting of income

The taxpayer many times reduces his tax liability by underreporting or misreporting of income. In such types of cases, as per Section 270A, a penalty will be levied on the taxpayer. The rate of penalty charged shall be 50% of the payable tax on under-reported income.

The following cases are considered as misreporting of income:

1. Any type of Misrepresentation or suppression of facts

2. Failure to maintain the investments in the books of account

3. The claim of expenses not validated by any evidence

4. Making any false entry in the books of account

5. Failure to proof any receipt in books of account having a bearing on total income

6. Failure to show any international transaction in books of accounts.

Penalty for failure to keep, maintain, or retain books of account, documents, etc., as per section 44AA

A taxpayer as per Income Tax Act, 1961 is required to maintain the books of account, as mentioned in section 44AA.

In case of any failure to maintain the books of accounts by the taxpayer a penalty of Rs, 25,000 will be charged as per Section 271A.

Section 92D specifies that every person getting into an international transaction or specified domestic transaction shall keep and maintain such information and documents as may be prescribed in this regard under rule 10D.

The penalty is levied as per section 271AA is attracted in the case of any of the following failures made by the taxpayer:

The Penalty amount charged shall be a sum equal to 2% of the value of each international transaction or specified domestic transaction made by the taxpayer.

Penalty in Case of Search

The tax authorities to unearth the undisclosed income generally conduct a search at the premises of the taxpayer. Section 132 provides the situations in which the tax authorities can instigate a search. Penalty for this default has been explained under section 271AAB.

Penalty in case of Income from Undisclosed Sources

The AO makes addition to the taxpayers income as per sections 68, 69, 69A, 69B, 69C or Section 69D.In case the taxpayer fails to explain the nature and source of his income will be charged penalty under Section 271AAC of the Income Tax Act.

Section 269SU has been inserted by the Finance (No.2) Act, 2019. As per this section every person engaged in business shall accept online payments if gross receipts for such business exceed Rs. 50 crore during the immediate preceding year.

Penalty of Rs. 5,000 will be charged if payment is not accepted by digital mode as per section 271DB.

Non-filing of statement of financial transaction or reportable account will attract penalty under section 271FA. Penalty shall be charged at Rs. 500 per day of default.

Penalty for failure to comply with provisions of section 133B

The tax authorities can enter the place of business of the assesee to collect details as required. If the taxpayer fails to comply with the provisions of section 133B, the penalty shall be charged under Section 272AA (1) up to Rs. 1000.

The income tax returns or TDS/TCS must be filed within the due date. Failure to comply with the laws mentioned in this article leads to various penalties as per severity of the default. The Indian Income Tax Act lays down all the laws related to the payment and filing of taxes in India is an essential piece of legislation. Penalties under the Income Tax Act, for default in furnishing return of income.

More on Tax: Prosecution and Punishment Under Income Tax.

How to file TDS Return?

TDS or Tax Deducted at Source is a process of collection of tax by the Government of India at t...

Investment in Property under Constr...

Why will Investment in under-construction property not be treated as Purchase? As per section 5...

The Income Tax department recently issued a notification regarding linking your PAN to your ban...